Capo Larghia is situated in between Punta Minuta and Monte Cinto, towering the Cirque de Trimbolaccio. It borders to the valleys of Asco (Stranciacone) and Niolo Basin (Golo).

Capo (or sometimes: Capu) Larghia consists of three peaks: The eastern and the central summit usually are referred together as "eastern summit" (2503m); between Col du Vallon and Breche Felix.
The higher, western summit (P. 2520) between Breche Felix and Bocca Pamapnosa is tower-shaped and therefor an eyecatcher, as viewed from Haut-Asco. 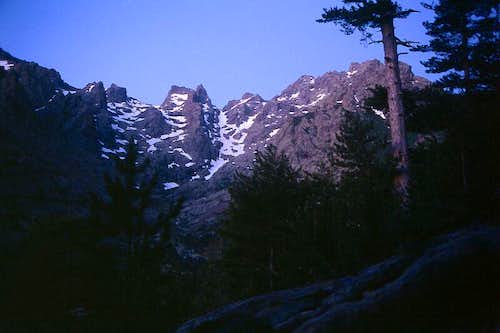 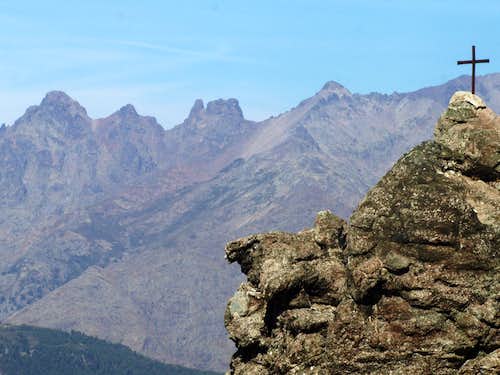 Capo Larghia (middle) from the south


There are several possibilities up to this impressive peak, none of them straightforward.
The normal route almost exceeds the border from scrambling to real climbing. I will focus on this here.
A west-east-traverse across all three summits is possible as well as the "arrete nord" or even the "arrete nord integral", which truely has western alpine format.

Public transport for north as well as south side of Capu Larghia is non-existent.

For the normal route trailhead is at Haute-Asco (1422m), reached by car through D147. The junction of this department road and the RN 193 Ajaccio - Bastia is a little north of Ponte Leccia. Before the little town of Asco the narrow road follows the deep-cut Asco george. At the trailhead some kms further on there is a hotel and a GR20 refuge as well as some skiing & lifts in winter season.

Normal route from Haut-Asco:
An appropriate description is given from Th. Goldmann (here, in german). The Capo Larghia is well visible from Haut Asco; one directly looks to the north arrete, culminating in the tower-shap western summit.
In general the route passes the beginning of the north arrete at ~1800m from right to left, traverses the first gully to the left of the arrete and, detouring further to the left side, gains this gully again at about 2200m. Continuing upwards the Breche Felix is gained.


From the car park, one starts with the Monte-Cinto-trail (signed, red dots) and leaves it after half an hour right before the bridge. That said one stays on the western side of the creek and -same as for Punta Minuta- aims for the snowy couloir coming down from Bocca Pampanosa. The P.1693 rockface is circumvented at the western side (i.e. keep right in sense of ascent) and with re-entering the streambed above one should have ones eyes on the opposite (eastern, i.e. left) side of the gorge. Here the routes for Punta Minuta and Capo Larghia split up.
On that left side of the gorge, a rocky gully (UIAA I-II) leads about 20...30 metres upwards to a horizontal ledge. This ledge one has to follow in direction to Haut-Asco (turn left in the sense of ascent). After about 50m it is easily possible to scramble upwards and reach easier ground. Traversing to the left, on passes the start of the north arrete an enters a basin with a little creek (1900m approx.). From here, a very steep gully directly rises upwards to the Breche Felix.

The route doesn't follow this gully but the next one to the east! So one has to traverse further left for the little valley coming down from Col Vallon. Again a basin with a creek and a little cascade is reached at about 2000m. Stick to the rock-slabs on the left side and scramble upwards in direction to Col du Vallon. At 2250m the ground broadens; cross the debris or snow to the right in order to re-gain the gully from Breche Felix: There is only one possibility to overcome the separating ridge between the two valleys/gullies (cairns). After few meters of descent (straight in direction of the abyss...) under steep rocks, one is able turn left and escape into the upper section of the gully. Breche Felix and Summit are visible, but one has to overcome two more walls before the Breche; both times these steeper parts are avoided at the right side (UIAA I-II). Here and up to the Breche snow patches may appear.

In the Breche Felix (2440m) the climbing starts. Descending ten meters to the south-west, a dihedral of 30...40m height comes into sight. The left side of the dihedral is a slab and the right side perpendicular with some holds (underclings). This is the crux rated UIAA II-III. On top I found pitons, so one can belay the followers; protection in between is hard to find IMHO -- just do it.
The dihedral terminates nearly on top of the crest. The scrambling following is quite airy, but no longer demanding and wiggles through the blocks. After few minutes the summit with a stone heap is reached. 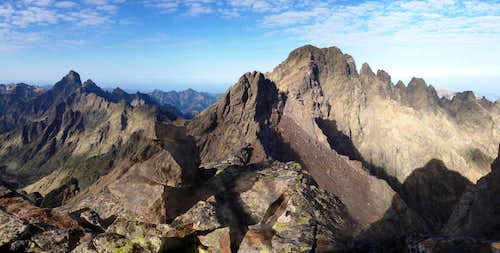 None. Several rules from the parc-naturel are not more than self-evident (no open fire etc.).

The normal route may have remains of snow even in the summer season. You can overview it right from the start and judge, if there are still steeper parts of the route under snow. In contrast, the technical passages are mainly oriented to the southern side. So in summer and autumn usually no gear (crampons, piolet) should be necessary. In spring most of the route should be under snow, but the terrain is not suitable for downhill skiing because of frequent steep steps.

There is a campground in the upper Stranciacone valley. Next to the GR20 hut at Haut-Asco basic camping is also possible.