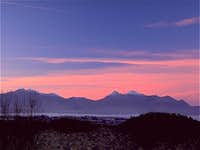 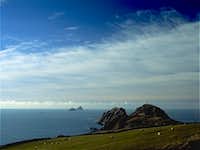 Carrauntoohil; Irish: Corrán Tuathail, also spelt Carrantuohill and in various other ways, is a mountain located in County Kerry, Ireland, and is the highest peak in Ireland. It is 1,038 m[1] (3,406 feet) tall and is the central peak of the Macgillycuddy's Reeks range; Irish: Na Cruacha Dubha, meaning "The Black Stacks". There are two other peaks in this range above 1,000 m (Beenkeragh, 1,010 m; and Caher, 1,001 m) and four others on the island over 3,000 feet, in the Dingle Peninsula (Mount Brandon), south Tipperary (Galtymore) and County Wicklow (Lugnaquilla). A large metal cross 5 metres (16 ft) tall tops the peak.The name "Carrauntoohil" derives from the Irish language Corrán Tuathail, meaning "Tuathal's sickle"

It is also the setting for Irelands greatest tour, ‘The Ring of Kerry’. The 176k circuit takes in the small towns Killorglin, Glenbeigh, Caherciveen, Waterville, Sneem, Kenmare, and Killarney. With lots to offer making it an idyllic trekking and climbing destination. With a landscape dotted with relics from the past such as Standing Stones, Ogham Stones, Stone Circles and Burial Grounds from the time of Celts. Most are older than Stonehenge, Mycenae, and even the pyramids of Eygpt.

Also well worth a look at are The Skelligs. Skellig Michael and the Little Skellig are two islands which rise sheer out of the Atlantic, five miles off the coast. Six hundred feet above the sea are the remains of an expertly restored 6th century Celt Christian monastic settlement, complete with beehive huts, oratory and terraced garden.

The mountain is most often climbed from the north-east, along the Hag's Glen to the col between Carrauntoohil and Cnoc na Péiste, and then north-west up the steep Devil's Ladder. The route has become more dangerous in recent years due to loose stones and crowding. No special equipment is needed to climb the mountain, but caution is advised. Alternatively, one can walk the two other 1,000 m peaks in a horseshoe trip, starting from the west. The traverse from highest point to the second highest involves a light scramble. The weather conditions on the mountain are very changeable, and due to a high number of underdressed tourists attempting the peak each summer, there have been a number of deaths. 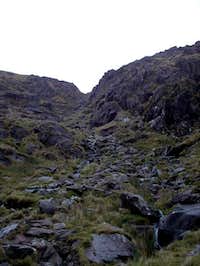 The traditional “tourist route” up the mountain, the Devil’s Ladder route has now become badly eroded in places and the Devil’s Ladder gully itself demands care due to its loose condition. River crossings can be problematic in very wet weather. Allow 6 hours for the round trip.

Start at either Lisleibane (Grid Ref. V827873) or Cronin’s Yard (Grid Ref. V837873). From Lisleibane follow the obvious track into the Hag’s Glen. Alternatively, from Cronin’s Yard follow the path until you meet the main Hag’s Glen track shortly after the Gaddagh River crossing (Grid Ref. V827864) WARNING – this river crossing can be extremely dangerous in high water and the Gaddagh can become swollen very quickly, ie. In wet weather what was a safe crossing in the morning may be lethal by the afternoon.

Continue into the Hag’s Glen, crossing the ford at Grid Ref. V821854 (can also be dangerous when swollen) and passing between Loughs Gouragh and Callee. After ascending a short rise the path becomes less distinct as it crosses an area of waterlogged ground before arriving at the foot of the Devil’s Ladder. The Devil’s Ladder itself is a steep gully filled with loose scree and boulders. It is now quite unstable in places and care should be taken, particularly when icy or in wet weather. Although it is tempting to leave the bed of the gully for what appears to be better ground on the flanking slopes (particularly in descent) this should be avoided. Stay alert to the risk of rocks being dislodged by other parties above you, or onto other parties below you.

At the top of the Devil’s Ladder bear right onto the long summit slope of the mountain. From an initially vague appearance, the track becomes more distinct as you gain height. Although it branches in several places, all variations lead eventually to the summit. In poor visibility beware of heading too far to the left of the track and onto the dangerous ground above Curraghmore, or too far to the right where a narrow track leads across the face of the mountain towards the ‘Heavenly Gates’.

Return via the same route or the Brother O’Shea’s Gully route.

The approximate journey times to Killarney by Car from nearby towns and cities are:

Bus Éireann run a number of express services to Killarney.
Also, Killarney is connected to all the other major cities in Ireland by rail. However it can be quite crowded during the morning and evening rush hour. See Iarnród Éireann.

Map of the East Iveragh Peninsula

From Killarney drive towards Beauford/Gap of Dunloe following the 'Ring of Kerry' to the Hags Glen close to the town land of Carhoonahone. At a small countryside junction you will see Kissane's shop and a telephone box. Take the road on the left, at the end of which is a small farmyard with a car park. A small fee of €2 will cover parking.
Follow the small track that leads to the Gaddagh River that you will have to cross and then continue up the Hag Glen. Note this river is not always crossable during or after heavy rainfall. If this is the case return to the Kissane's shop and take the next track on the left avoiding the river crossing. No parking is available along this small track so be careful where you leave your car has the track is narrow and used by local farmers. Note: you could try hitchhiking from Killarney to Carhoonahone.

None, Carrauntoohil is not high by international standards, and severe snow and ice conditions are rare due to the prevailing winds from the Atlantic, nevertheless it should not be underestimated as it can be unforgiving for even the most experienced and well-prepared climbers and walkers. Severe weather conditions can set in within minutes due to the proximity of the area to the Atlantic Ocean.

No restrictions are enforced against camping. No restrictions are enforced against camping. However one should not camp close to rivers and campsites should be cleared the next morning and garbage should be brought back down of the mountain with you, obviously!
A small hostel is also situated beside Kissane's shop called the Climbers Inn. And if you fancy a pint, Kate Kearneys Cottage
is not far away.

Also note that Ireland's position as an island on the edge of the continent of Europe means that the weather here is generally varied. It does not get cold in during winter or particularly hot during summer enjoying a very moderate climate. However it does rain a lot! And we’re not joking! It’s proximity to the Atlantic also means that the mountains here can sometimes experience storms of a ferocity seldom seen in many larger mountain ranges elsewhere. Oh, and watch out for Leprechauns and Fairies!. A small hostel is also situated beside Kissane's shop called the Climbers Inn. And if you fancy a pint, <ahref="http://www.katekearneyscottage.com/"target=_new>Kate Kearneys Cottage is not far away.

The Ordnance Survey maps covering the East Iveragh peninsula are excellent. Sheet 78 of the 1:50K Discovery Series covers the region.
A 1:25K map is available however it can be hard to come by. You're best to try the local hiking shops in Killarney.

Kerry Mountain Rescue have recently published essential safety information on their website following a number of deaths on the mountain. It is available here.