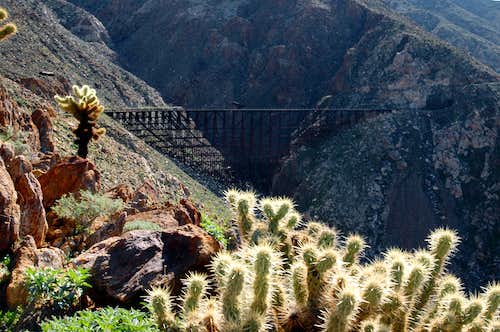 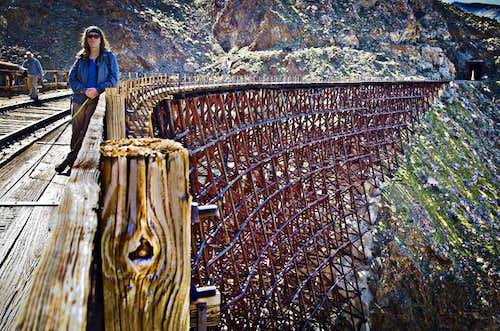 This area is desert so the best hiking times are in the cool seasons. Railroad tracks have a very slight grade, so even though this is some rough contry. It is flat along the tracks. Carrizo gorge has several groves of native California Fan Palms. The indians that used to live in this area used the palm nuts as a food source and grinding mortrero can be found near some of the groves. 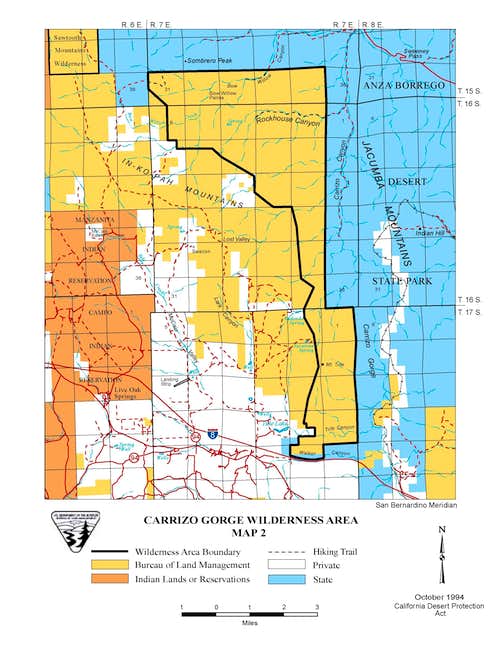 Carrizo Gorge
From the town of Ocotillo, go first North and East on Imperial highway (the only paved road out of town in that direction). About 4 miles from Interstate 8 turn South on the dirt road, Dos Cabezas Road (spanish for two heads road), two wheel drive is OK. Follow Dos Cabeza Road South and West, it will parallel the railroad tracks, for about 10 miles. This will put you at the lower end of Carrizo Gorge.

Goat Canyon trestle, the hard way
Mortero Palms to Goat Canyon Trestle is the legal route. There is an excellent description of this hike in Jerry Schad's book, Afoot and Afield in San Diego County.

Goat Canyon trestle from Ocotillo to Jacumba(the trespassing route)
Follow the directions above to the lower end of Carrizo Gorge.
Distance along the track to Goat Canyon Trestle, 5 miles
Goat Canyon Trestle to the Nudist colony near Interstate 8, 8.5 miles

"This wilderness is the only ecological transition zone between the Colorado Desert and the peninsular mountain ranges represented in the National Wilderness Preserve System. Three peninsular bighorn sheep herds call the area home, and the San Diego coast horned lizard, Swainson's hawk, golden eagle and other birds of prey have all been spotted here. California fan palms line the edges of dry washes and narrow canyons, creating desert oases.
CAMPING: Camping is permitted, limited to 14 days. After 14 days, campers must relocate at least 25 miles from previous site."

The spectacular Goat Canyon Trestle, completed in 1933 as part of a realignment of the original railroad route, after a tunnel collapse. Although it is a noted San Diego County landmark, it's rarely seen. The trestle is 630 feet long and 186 feet tall and spans Goat Canyon.

There is a tank car and tank above it on the hill that were used as fire fighting equipment in the days of steam locomotives spewing hot ashes along the track. Right next to the trestle is a half mile long tunnel.

There is some good climbing and an excellent cave in McCain Valley. 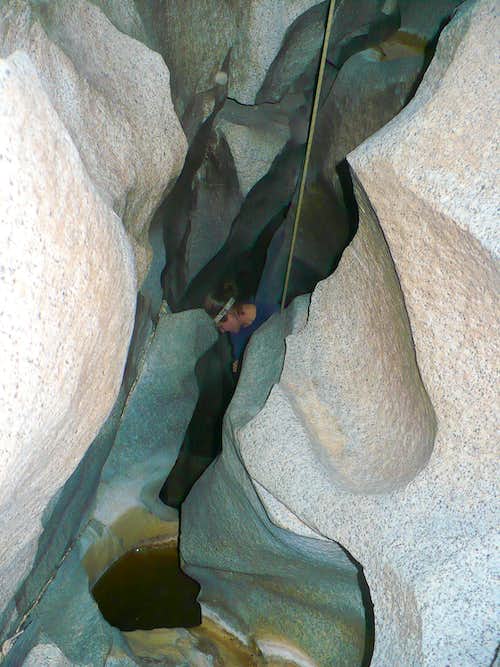 The San Diego Grotto group publishes a map of Thunder Canyon Cave, but they are tight lipped about the location. I assume they have good reason to keep it quiet, I know that they love the caves. I have not done much caving so it seems odd to me as a rock climber to keep locations secret. It is actually very hard to find the cave, the entrance is non descript, it just drops down between some boulders. I have heard that when there is water running that it "thunders" through the cave. The cave is obviously water carved through granite. Without gps coordinates it would be nearly impossible to find. Please see the additions and corrections of this page for more on the discussion of the location of the cave.

I was introduced to this cave by a friend. There are two fairly long raps and a few shorts raps as well as a squeeze at the end that will make big guys really squirm.

This is some of the official McCain Valley description from the BLM
"Established in 1963, the McCain Valley Resource Conservation Area is managed to provide for a variety of uses including wildlife conservation, livestock grazing, and recreation. Recreational activity in the area includes camping, hunting, hiking, horseback riding, backpacking, mountain biking, wildlife viewing, photography, and off-highway vehicle (OHV) use. The area encompasses 38,692 acres of the In-Ko-Pah Mountains.

Cottonwood and Lark Campgrounds offer vault toilets, picnic tables, and water and costs $6.00 per night. A campfire permit may be required."

The construction of the 140 mile San Diego & Arizona Eastern Railroad began in 1907. The project was financed by San Diego magnate John D. Spreckels, who owned the Spreckels Sugar company. It carried freight and, for a time, passengers, between San Diego and the Imperial Valley. The railway was completed in November, 1919, at a cost of US$18 million.

The railway runs from San Diego to El Centro, and a significant part of the tracks are in Mexico.

In the 1950's the railway stopped passenger service. In the 1980's the section of the railway that goes through Carrizo Gorge fell into disrepair. There were tunnel collapses and trestle that burned.

In 2004 the Carrizo Gorge Railway company reopened the tracks for daily freight operations.

There is an eleven-mile stretch of the railroad the follows Carrizo Gorge between Jacumba and the desert floor near Ocotillo. There are 16 major tunnels and 21 trestles including the one across Goat Canyon.

Please be aware that the Carrizo Gorge Railway uses this track to haul sand up from the desert to Tijuana, Mexico. Technically it is illegal to trespass on the railroad Right of Way, and there are rumors that they are prosecuting trespassers. Officially hikers and bikers should not get closer than 100 feet of the tracks, especially around the tunnels.

UPDATE March 2009 - There is no evidence of recent usage by the railroad. Reports are that the tunnels are clear. Hikers and mountain bikers are once again using the route. There was a group of 20 mountain bikers that organized on line to ride the tracks from Jacumba to Ocotillo, and they were met by private security of the railroad and issued "don't come back here" tickets. So use at your own risk.
Carrizo Gorge Railway Inc UPDATE February 2012 - Hiked from the bottom in beautiful weather. Lots of bikers coming down from the top. Obvious that there are no railroad cars on the tracks, there are places that dirt has washed over the tracks and so would be impassible by RR cars.

First off, great page, I really enjoyed it. I did however want to make a suggestion. I am an active member of San Diego Grotto and have been to Thunder Canyon cave. This is not a cave that people should wander into or find by chance. There are mutiple rappels, potential for running water, and a very very tight squeeze that many people get stuck in. To make matters worse, recently a debate has been going on about the placed protection in the squeeze and it might have been removed. As a rock climber as well, I first found it to be incredibly frustrating that the Grotto does not release the location of the caves. But that is before I saw what people have done to caves like Alpine Cave or others like it. Besides the inherit danger and remoteness of the caves. So if you please, could you either further dull down the directions to the cave ( I know they are vague, but some people are rather determined ) or add a warning about the seriousness of the cave. It really should not be attempted by anyone who has not had caving experience or is at least with a caver as it does require specialized gear. Thank you very much, and might I say it really was a nice page. -Preston

Sure, N.P. I muted the description down even more. I am not a caver so I was a little baffled by secrecy. As I am sure you are aware, for climbs you can get descriptions that are almost hold by hold. The most damaging thing I have ever seen on climbs are the old piton scars, and really, that damage is very low. Are the people attracted to caves just "different"? I mean are they more destructive, are there more unprepared people? I am just trying to wrap my head around the difference in behavior that you have seen in caves (bad) to the behavior that I see at crags (mostly respectful).

Thank you very much. I don't think people are different. Cavers are just like climbers (I am both), we are respectful and friendly 95% of the time. Normally, the destruction comes from people who are just a group of kids or such. They leave graffiti and break formations, it's very sad. A true caver would never do that. In this cave, it's not so much about avoiding destruction, though there are a couple formations that should be preserved, it's mostly about keeping people safe. This just is not a cave you want to get in trouble in.

VR tour on the RR tracks

For another view of Carrizo Gorge, here's a VR tour (click the red hotspots) that follows the RR tracks SW from the Goat Canyon Trestle to De Anza Springs: http://www.allaroundnevada.com/impossible-railroad/