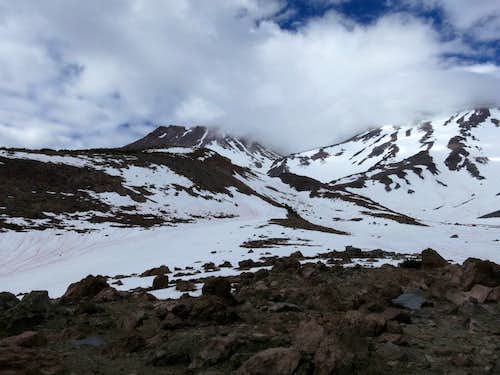 Get on the trail behind the building and start hiking. Soon you arrive at a T junction. Take the left fork about 2 miles to Horse Camp (7,800'). At Horse Camp leave the standard route at the cabin by heading to the left through some campsites.

From here to Hidden Valley the trail does a 1,400' ascending traverse. There is some trail braiding in a couple spots but generally it is good if a bit loose here and there. The trail should be marked by wands in the summer months.

Although it could be done in a day. Most people will want to camp here in Hidden Valley either on the snow (until late summer) or among the rock outcrops. Depending on time of year, you might have ample running water in Hidden Valley (along with lots of sediment - bring something to filter with unless you like your water brown and crunchy).

The setting is impressive, with great views of the mountain and valley, and camping options are good. Don't expect isolation, as the West Face route is popular, but the combination of the extra distance compared to the Avalanche Gulch approach and the longer summit day will keep numbers down. 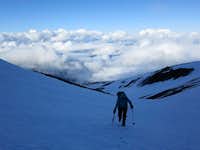 From Hidden Valley proceed up the obvious gulch, aiming for the saddle between Shastina and the shoulder of Shasta. By July this route is already melting out so consider the West Face Gully route instead. From Hidden Valley, you may pass an initial rock island by sticking to climber's right or left.

Sticking to climber's right in the gulch proper will bring you to a short headwall section right off the Valley floor that looks steep from a distance. This is short and doable, so don't be put off - it's the steepest terrain you will encounter for a while on this route. After the short headwall, the route becomes a hike all the way to the Shasta-Shastina saddle. The actual saddle will not be visible for a while, but the direction will be obvious.

From the col you can (and should) summit Shastina and explore its beauties before continuing on to your main goal. Budget 1.5-3h for that. For Shasta, proceed uphill to the east towards the West ridge. From here, you should have expansive views all the way down the Whitney Glacier, Shastina, and the NW slopes of Shasta and the summit.

From here, you have four options. The route used to be straightforward, and is still listed as such in most guidebooks: you just had to follow the snow directly below the West ridge to the base of Misery Hill. However, sometime in the late 1990s or early 2000s, the Whitney glacier bergschrund advanced towards the ridge, making the passage between the bergschrund and the ridge narrow and steep. 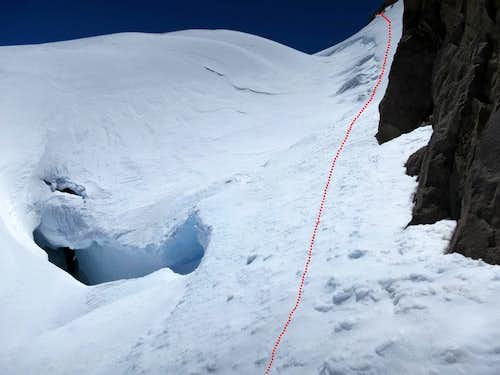 Option #1 is to climb that section. Continue hugging the West ridge towards the bottleneck. The terrain stays relatively easy for a while, but you will have the exposure of the side of the bergschrund underneath you. In early season, this should be bridged. The traversing is easy, but falling could be bad. You will soon reach the bottleneck. This is a short section (around one rope length/60m?) of 50-55deg terrain, directly above the head of the bergschrund gaping about 50ft(?) below you.

The surface can vary: likely rime and snow in the early season, a mix of things mid-season, tending towards blue ice being exposed late season. This is a short and exciting crux to an otherwise easy route! You can also exit on the rock band above towards mellow ground near the end of the traverse. (When I did the route in July 2012, the surface was a mix of rime and snow.

We roped up, but pickets were no good: the snow was too soft to support them, even t-trenched, and the blue ice underneath prevented me from driving them in. I resorted to scraping 12-18" of snow to reach the blue ice underneath for an "ok" screw placement. For the most part we got good sticks. In such conditions, I recommend soloing this with two tools. Later in the season might be more enjoyable once the blue ice is exposed).

Option #2 involves getting on the rock ridge proper and scrambling all the way. I have not done this, but according to SMG it is "[e]xposed with some solid rock and some choss. 4th class +, maybe a couple boulder moves for added value. Very cool climbing." (see here)

Option #3 is to traverse left onto the Whitney Glacier before you reach the bottleneck, and find a bridge to cross the bergschrund towards Misery Hill. This is best scouted early on from the Shasta-Shastina saddle. You could also try to avoid the bergschrund by heading NE towards the smooth, upper Whitney glacier that bypasses Misery Hill and deposits you at the summit plateau, but this involves crossing under the upper icefall, which is known to be active. Either way, this option involves honest glacier travel, so be prepared and equipped. It is likely the least technical option though. For a view of late season, open crevasses on that section of the Whitney, take a look here, keeping in mind that things change on glaciers over the years. 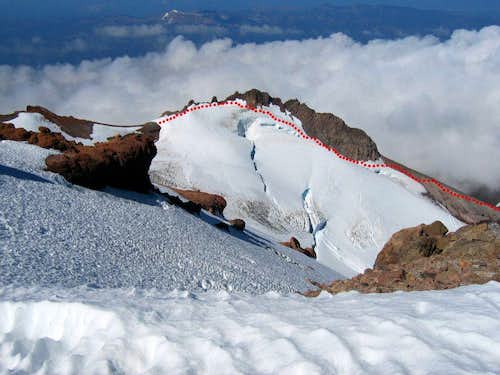 Option #4 is to traverse onto the West Face route towards the south, but this can be loose if melted out, and you miss out on the bergschrund fun. This is definitely not the option I would pick.
You should now be at the base of Misery Hill, less than 1,000ft from the summit. Trend to climber's right slightly if you want to intersect the established trail sooner rather than later, joining the throngs ascending the Avalanche Gulch route to the summit. To descend your quickest option is to do a giant 4,000ft glissade down the West Face into Hidden Valley.

Crampons and ice axe at a minimum, along with standard overnight and mountain gear if camping. For the snow/ice traverse above the bergschrund, I recommend two tools/axes. You may want to carry a rope and some snow/ice protection depending on ability and conditions. For crossing onto the upper Whitney glacier, carry what you need for safe glacier travel and a potential bergschrund crossing (rope, snow/ice protection, crevasse rescue hardware). For the rock scramble on the ridge, plan according to your comfort level on Class 4+ rock. Judging from the rock lower down on the ridge, my (uninformed) sense is that pro opportunities do not abound. 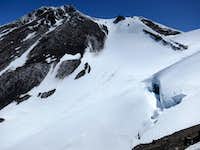