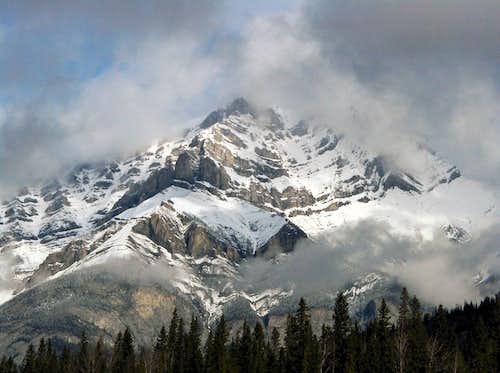 From Banff Avenue, downtown Banff, one can see this mountain towering at the end of the street. It appears to stand as a pyramid. A sweeping west ridge leads down to the Mount Norquay Ski Area, where the scramble (normal) route begins. The south ridge of the mountain cuts directly at Banff. And to the right of the south ridge is a large bowl that funnels winter avalanches from the top right down to the bottom. A popular scramble it also sees many ice climbs due to the form up of ice on the lower part of the mountain. Cascade Falls is a beautiful 300m grade 3 ice climb that probably sees the most ascents of any climb in the Rockies (when its in shape).

From Banff follow the road that leads up to the Mount Norquay Ski Area. Park where the signs tell you to. The trail to Cascade Ampitheatre begins just past the lodge to the right of the road/ski run.
The nearest international airport is located in Calgary, about 1.5 hours east of Banff. Bus, Airporter or Rent-A-Car and drive the Trans-Canada #1 west to Banff. 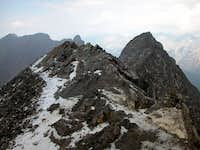 Your in Banff National Park so be sure to have a backcountry wilderness pass and a Park Pass for your car as well.
Park Passes can be purchased at the East Park Gates as you enter the park .

Backcountry Wilderness Passes can be bought at the Banff Information Center on Banff Ave, across from Roots and The Fudgery. 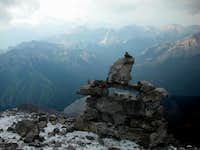 Cascade can be climbed year round depending on the amount of snow on the upper slopes. There is a large exposure big cliffs if an avalanche was to take you.

The best season to do it in is summer. July, August and September, but beware summer storms are possible.

If there is no snow after the false summit. Look for fossils along the way.

While there is no camping allowed at Cascade Ampitheatre,
shelter of every kind can be found in the Banff area.

Tunnel Mountain is a good camping area near Banff but this is a day trip.

Joining a club such as The Alpine Club of Canada is recommended when climbing in Canada. While it is not obligatory, useful information can be had at any of their Clubhouse in Canmore, or at their website which is open to everyone.

Staying at the club in Canmore is 18$ Canadian for members and 19$ for non-members. It can get quite crowded in the summer so a reservation is recommended.