Castle Rock is located in the western White Knob Mountains of central Idaho. 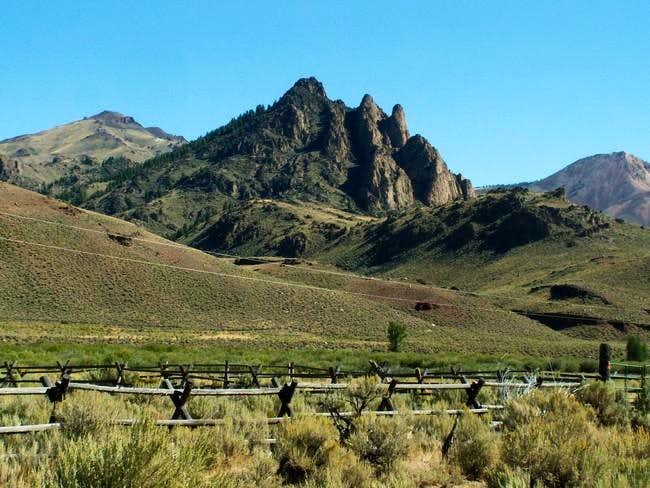 Castle Rock is a small, yet beautiful mountain that sticks out like a sore thumb in its surroundings. The White Knob Mountains in central Idaho are smooth, massive, mountains that rise from the Copper Basin but Castle Rock, is rugged and is more reminiscent of southwestern terrain than the high and wild peaks of Idaho.

The northernmost summit of Castle Rock's three summits is the highest at 8,781'. The middle summit may nearly be equal to that height but has not been surveyed by the USGS.

Castle Rock is made up of countless towers and sheer wall faces, most of which are of solid rock. It's appearence changes drastically when viewed from any direction bears a striking resembelence to a castle when viewed from Castle Creek.

Although short, a climb up Castle Rock is steep and wild, requiring difficult class III climbing and quite a bit of exposure. Therefore, few people, if any, have ever climbed Castle Rock. There is nothing but large boulders and sage at the ill defined summit. A traverse from either across the summits would require class V climbing.

To access Castle Rock and its only route from Ketchum, Idaho, drive 22 miles northeast on Trail Creek Road, an improved gravel road, until reaching the turnoff for Wildhorse Creek and the Copper Basin.

Continue on Copper Basin Road, another improved gravel road, past the Wildhorse turnoff until bending a corner in which the unmistakable towers of Castle Rock boldly face the valley. Drive past the sign that identifies Castle Rock, yet does not give an elevation, until reaching the spot where Castle Creek flows into the East Fork Big Lost River. Park here.

The dangerous river crossing at the initiation of the ascent to Castle Rock is not safe to cross in most years until early-September.

Castle Rock could be climbed snow-free as early as April in some years. However because of the river crossing this wouldnt be possible until September.

A winter ascent has never been recorded and would be extremely dangerous due to the steep nature of the mountain.

Camping is possible at the Wildhorse, and Star Hope Campgrounds nearby, otherwise, car or tent camping is not recommended in Castle Creeo or along Copper Basin Road.

Castle Rock is located in a remote section of central Idaho and is not near any major reporting weather stations. However, the following links provide excellent information for local and regional conditions.