Structurally, Castle Valley, just east of Moab, Utah, is part of a large collapsed salt anticline that includes Paradox Valley to the southeast below the La Sal Mountains. Together these two valleys are approximately 8 miles long and 3 miles wide. They drop from nearly 6000 feet to about 4200. Demographically speaking, Castle Valley is also home to some 400 residents, mostly hobby farmers. But most notably (to climbers anyway), Castle Valley is home to some of the most aesthetic climbing objectives anywhere in the lower 48 States. An array of Wingate sandstone towers, known as Castle Ridge, dots the 1000’ high skyline, hems in the valley to the east, and offers crack upon crack of steep and varied desert climbing. 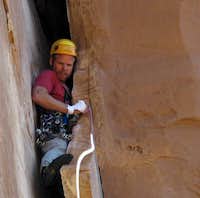 Castleton Tower is by far the most popular and well known of these climbing objectives if for the mere fact its Kor Ingalls route, 5.9, made it into Steck and Roper’s “Fifty Classic Climbs of North America” published in 1979. However, the North Face, 5.11a, route on Castleton is the best route I have personally climbed in all of Castle Valley, and there is a growing consensus locally in Moab that shares my opinion. Yet the North Chimney, 5.9, on Castleton Tower has become the most popular of any route in Castle Valley, due to its moderate grade if nothing else. Fine Jade on the Rectory (across from Castleton Tower) is fast becoming an ultra classic in its own right. The Nuns and Priest connect to the Rectory and Sister Superior can be seen in the distance to the north which requires a different approach trail to reach that section of the ridge.

As a kid, I faintly remember a Chevrolet commercial featuring a car and model on top of Castleton Tower. They were placed there by helicopter of course (one of the few positives the Vietnam war yielded, great helicopter pilots). At the time of this infamous commercial, no more than four ascents had been made on the tower.

Drive east on River Road (Utah 128) for over 15 miles (mile markers). Turn right at the Castle Valley sign. Drive another 4+ miles looking for a small trail head and camping area on the left hand side of the road, slightly south of Castle Tower to the east. The trail to the base of Castleton Tower and the Rectory is approximately 1.5 miles long and gains over 1000’ in elevation. It splits just below Castle Ridge, the right fork heading for Castleton and the left fork for the Rectory, Nuns and the Priest. Sister Superior involves a whole different approach trail from the Castle Valley road. 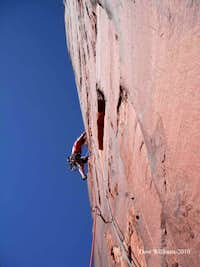 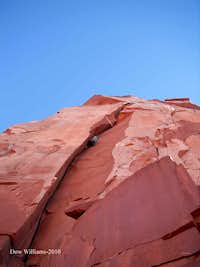 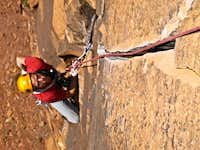 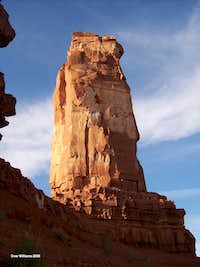 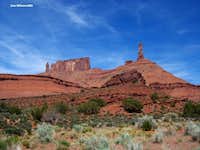 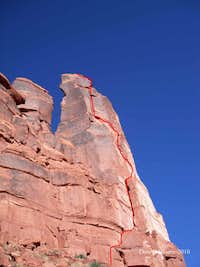 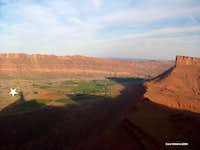 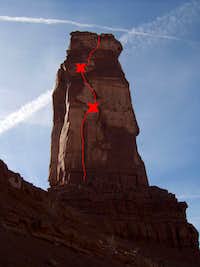 The Towers and Routes of Castle Valley


Can be quite pleasant in June if you get an early start. We were shaded and cool for the whole route, but did move fast. The top of the third pitch was quite stout off width, can't protect and the bolts are so-so. Can't lie back because the edge has gotten way too polished. Turn and go right side in and look for an edge you can't see with your right hand and use some features on the left wall to reach a good hold and some pro op. Goes pretty fast and furious, we had it all to ourselves on a Sunday while folks were lined up on the North Chimney! Dow


Fantastic desert tower route, by anyone's standard. I liked the OW 3rd pitch, but then I drink Coors light beer as well. Either take a #6 or stop at 4". I carried the damn #5 all the way to the summit on lead. Nothing to say about that first pitch, it is just as good and straight forward as trad gets really. The crux of those last two pitches was really the weird, hard to protect on lead, overhanging 2" crack on that meandering 2nd pitch. The story I read somewhere on the net of the young men who thought they were on the North Chimney as they battled the first pitch is the kind of story I sure wish climbing mags would print more of! Great story to be sure. Dow

This stellar and hard route climbs the imposing, 400-foot southern prow of The Rectory Mesa in four to five pitches. The position is outstanding – offering constant views of the north face of Castleton Tower and the La Sal Mountains further back – and the climbing is sustained. Given that all belays are well bolted and you can rap the route with a single 60 meter rope, the commitment factor is low on this one. Don’t let this discourage you – the route feels plenty adventurous given the constant exposure and sometimes thin pro on hard sections (thinking for example about the 5.10+ face section directly below the finger crack crux on pitch 2). Radek

The route reaches the summit of the tower in 4 great pitches. It offers the least difficult means of topping out on the summit of this awesome tower. There is some debate (surprise!) as to what the true rating of the crux free pitch is (that's pitch 3). Although rated 5.10+ by the FA party, there now seems to be a general consensus that the pitch has gotten harder (sandstone holds wear out on much smaller time scales than most other rock types...that baby looked mighty smooth from the comfort of my aiders). Current ratings in guidebooks put it at about 5.11b. If you're aiding this section (as we did), it's a trivial (though possibly a bit reachy?) A0 bolt ladder. In this case, the free crux of the route hits you on pitch 1. Done as 5.9 A0, the route is still a substantial notch above Kor-Ingalls route on Castleton Tower in terms of free climbing difficulty in my opinion. In fact, Stewart Green gives the pitch 1 crux OW a 5.10 rating on his topo (see guidebook listings on main page). Still, with adequate big gear the crux pitch 1 protects well and the route should not be missed just because one does not like off-widths. Radek

A bit tougher than I thought it would be, or I am just getting old. Loved the squeeze chimney, my cup of tea. I combined the first two pitches. The 3rd pitch crux goes best low, cross under the bolt. Combined the last two pitches (4-5). The 4th pitch is sustained, crux came at the end I thought. The 5th pitch pro was pretty solid, despite how old those pins are, felt bomber to me. Watch that first rap, advise pulling the knot out over the lip below. Dow

The direct start is actually the first pitch of Spirit World. If you choose to climb it, it becomes the crux of the climb, of the C4#3 and 4 variety. It is a beautiful crack/corner climb that finishes on a broad ledge. Move the belay left and climb another stellar pitch in the massive right facing corner on the north face to a much narrower ledge. I walked our tag line out right and left it on the fixed rap anchors as two single pitch raps make it back down to this ledge from the top. The third pitch offers variations no doubt, but the most natural line continues up the corner and traverses left under a roof to a ledge left of the arête and out of sight of the belayer. The final pitch was fairly quick and easy going to the north end summit of Parriott Mesa. A fixed rap is located climbers right a short distance. Dow