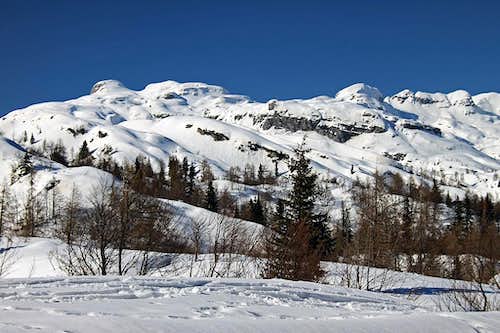 Kal (on the left) and Čelo (on the right) from Komna 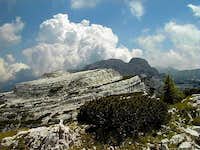 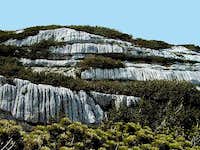 In Slovenian language č, š and ž are pronounced like ch, sh, and zh. Our mountain is written Čelo and is pronounced similarly as "cello" - the instrument. Its meaning is "forehead".

In the high ridge, which borders the Valley of Triglav Lakes on the west, Čelo is the fist high summit from the south. It rises north of Velika Vrata pass, 1924 m, which connects two ex alpine pastures: Za skalo and Lopučnica.

The summit is not so difficult to ascend, but the terrain is pathless and trailheads are far away. In summer and autumn only a few admirers of loneliness climb there up, in hard winter almost nobody and in spring quite some tour skiers, those who are knowledgeable enough and who love long lonesome tours. Actually, if we think that from Komna, where tour ski crowds are coming, quite many people do the long tour on the much more remote summit of Krn, we can ask ourselves, why the closer and equally high summit of Čelo is left mostly unvisited. It is true that the tour on Krn is very nice, but it is much longer and in a purely skiing sense Čelo is certainly equal, if not nicer.

We did the ascent only in summer and were pleasantly surprised by some of its unusual characteristisc: the wild passage into Lopučnica valley and beautiful, karstic plateaus, called "lašti"*. West of Čelo, from Za skalo meadow, towards the north-east the beautiful Travnik high valley rises. That valley separates two mountain streaks, which at the end of the valley come together on the Travnik summit, 2258 m. Further towards the north-west, the main ridge continues towards Plaski Vogel, 2349 m, and Veliko špičje, 2396 m. The south-west streak is extremely rarely visited. In the south streak, going from Travnik, the first summit is Vršac (another one with that name), 2238 m, then comes Čelo and then Kal, 2001 m, where the Komna world begins. Besides Čelo for the ascent the most convenient summit must be Travnik, which is technically not difficult and is also a nice goal for tour skiing. All the tours in this area are a bit more demanding due to pathless terrain. They are certainly not recommended when visibility is poor.

* "lašta" (plural: "lašte") has in Slovenian language the same meaning as for example in Ladinian language (in Dolomites) the word "lastei", "laste". It means a thick, mostly horizontal, usually quite barren limestone plate.

As almost the whole Komna plateau, also the massif of Čelo is made of layered Late Triassic dachstein limestone partially intermitted with dolomite. The most beautiful examples of these rocks, eroded by water, can be seen in the vicinity of Vrata pass. 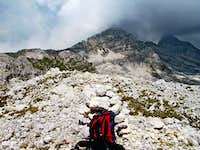 When we visited Čelo, visibility was not the best, but the views across Komna, on the Valley of Triglav Lakes and on the mountains above it were very nice. Towards the east, west and south the views are actually completely open. On the north, the higher Plaski Vogel catches your eyes. On its slopes you can see all possibilities how to climb it. The summit of Veliko Špičje is already more remote.

Let's leave aside more remote trailheads which can hardly be considered for a one day trip on Čelo (like Blato alpine pasture and the end of the road above Vogar meadow), and focus only on the two most important ones: 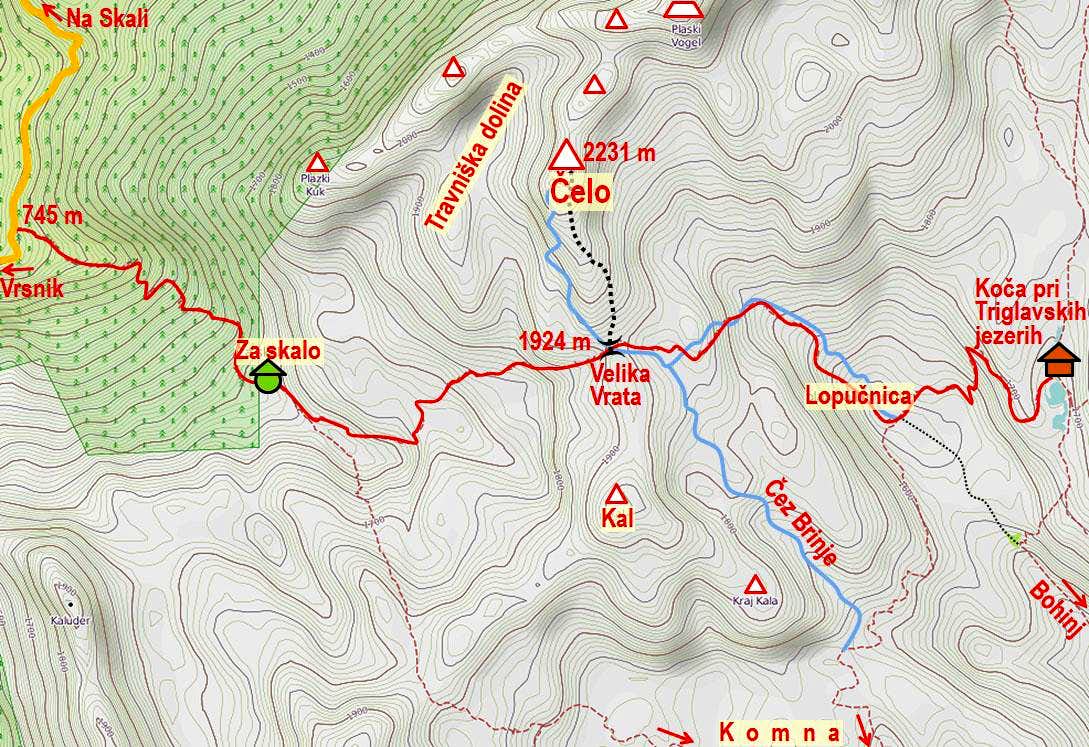 Here I will describe only the ascent from the south, from Velika Vrata pass. The ascents from the north, from Travnik require good orientation skills and also some easy climbing.

1. From Za skalo alpine meadow on Velika Vrata pass. While from Bohinj (Koča pri Savici) you have some 7 h on the summit of Čelo, from this, western side, you have only good 5 h. You drive into Vrsnik valley (just east of Soča village you deter right, towards the south-east). On the place where the road from Vrsnik up to the settlement Na skali turns towards the north, we must be careful on marks, starting there. We park by the road on 745 m and start following the marks towards the south-east. So we reach Za skalo alpine meadow (not to be confused with Na skali settlement!) in some 2 h. From the ex alpine pasture, 1550 m, we continue towards the east. Just above the meadow the path is branching. We take the left branch (eastwards) and comfortably reach Velika Vrata pass in another good 1 h 30 min. Easy (T2), all the time marked.

2. From Koča pri Triglavskih jezerih (The Hut at Triglav Lakes), 1685 m on Velika Vrata pass. This is the usual, quite easy approach on the pass, which is also all the time marked. From the hut we go by the marked path on the western shore of Dvojno jezero (lake). We follow the inscriptions to Komna. The path first ascends a bit less than 100 m on the ridge, overgrown with larches, which separates the Valley of Triglav Lakes from the valley of Lopučnica. So, on the other side of the ridge the path descends again and soon reaches ex Lopučnica pasture, 1550 m. If we are ascending Čelo from Bohinj, so from Koča pri Savici, the meadow of Lopučnica can be also reached by a pathless terrain, directly from Bela skala. Instead of turning at Bela skala right up towards Koča pri Triglavskih jezerih, we simply continue through the primeval forest (difficult orientation). 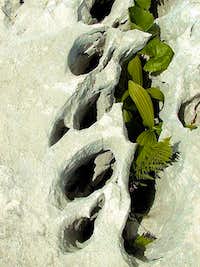 In the middle of Lopučnica meadow the path branches. The left branch goes on Komna, the right one on Velika Vrata. So we go right, the path is leading us towards the north-west. Soon nice larch woods replace the meadows. A bit higher the path turns left and over the southern slopes of Skodelica hill, 1919 m, we soon reach out of the woods. From here till Velika Vrata the path ascends only gently. We all the time walk over very interesting high karst plateaus, abundant with karst phaenomena. 3 h from the hut to the pass, easy, T2.

3. Summit ascent from Velika Vrata pass, 1924 m. This ascent on Čelo is fairly easy, but all the time pathless and also not marked (we can follow rare cairns). Karst terrain can be demanding for hiking. You all the time need to be careful, climb time to time from one terrace on another, take care of a safe step. On this scramble you can't afford to twist even an ankle, being on such a remote place! Otherwise on the Swiss Scale for hiking tours the difficulty of ascent would be rated T3, from the pass you have less than 1 h 30 min on top.

From the pass we go towards the summit, at first a bit right of the main ridge. The direction is always north. As long as we can, we follow rare cairns, which help us find the best passages through dwarf pines, around sinkholes and rocks. The passages are easy, but sometimes taking additional time due to detours. After some time when you keep right of the ridge, we slowly go left upwards, climb from one terrace on another and so reach the main ridge. By it we continue easily up and soon reach the fore-summit, called Glava za Bajto, 2131 m. From that one you already see the main summit. You descend only a little and then ascend the main summit in another 15 minutes. 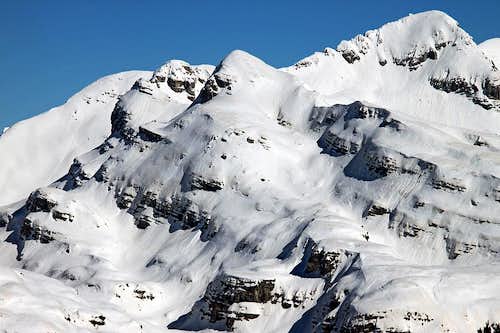 The ski slope of Čelo (the smaller summit in the middle)

If we are on a ski tour, we ascend from Velika Vrata in the vicinity of the main ridge. The ascent is easier if there is enough snow. Skiing down is best through a steep channel which brings you down below the western side of the main ridge. That summit part requires a fairly good technique of skiing, the rest is less demanding. From below the channel we continue skiing by nice passages towards the left and reach nicely Velika Vrata pass. Actually we get out of the slope some 50 meters below the pass, on the western side.

From Velika Vrata we continue skiing either down to Lopučnica valley (very nice), either through Čez Brinje passage on Planina na Kalu (high alpine meadow on Komna). The third option is to go by the main ridge towards the south, then on the summit of Kal, 2001 m, and then over Lepa Komna towards Dom na Komni (hotel) and down in Bohinj.

In the lower part of Travnik valley we were only once, but we never ascended the valley towards the upper end. We used instead the path which crosses the slopes of Kuk and reaches Dol pod plazmi. Above planina Za skalo there is a short rocky step, over which the hunters path is secured by a lose cable, later the path ascends more, but the whole crossing is quite easy.

On Čelo you can ascend almost in any time of a year. The tour in hard winter conditions is demanding, due to remoteness of the area, steep summit slopes and orientation. From Komna a winter tour is not too long, but it will still take us most of a day. In winter you must have skis, otherwise the tour is almost impossible.