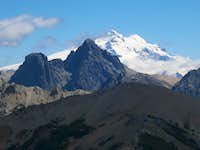 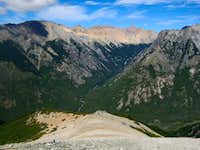 Cerro Bella Vista isn't a household name in Bariloche like Tronador, Cerro Negro, Catedral, Cerro Lopez, and Cerro Otto, but it is visible from all those well-known peaks and many parts on town, especially Avenida Bustillos.  The climb is fairly easy, and quite popular, with a maintained trail leading to the summit.  The views are spectacular.  In addition to the peaks mentioned, you can see Cerro Navidad, Cerro Campanario, Cerro Ventana, and Cerro Ñireco, not to mention Lago Nahuel Huapi, Lago Moreno, Isla Victoria, and Peninsula Llao Llao. 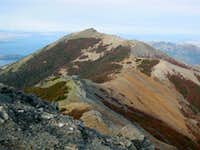 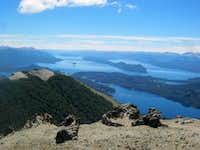 A typical hiker can complete the 1000m ascent to the summit in two to three hours from the trailhead, descending in an hour or two.  If taking public transportation, add an extra hour on each end.  I recommend climbing Cerro Bella Vista in conjunction with Cerro Goye.  It is probably best to climb Cerro Goye directly from Colonia Suiza, traverse over to Cerro Bella Vista, and descend via the trail described on this page.  The hike could be done in reverse, but the route-finding is trickier on the descent from Cerro Goye to Colonia Suiza. 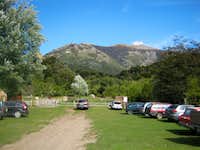 Picada Jakob Trailhead
The principle trailhead for climbing Cerro Bella Vista is the same as for the trail that leads to Refugio San Martín (Laguna Jakob). It is best accessed from Colonia Suiza. From Bariloche, Colectivo 10 (and 11) has several daily departures that leave for Colonia Suiza, arriving in roughly one hour. The trailhead is actually 6 km from Colonia Suiza. From the bus stop in Colonia Suiza, choose either the road through town or the road to Villa Catedral. The two roads meet on the other side of town and continue to lead you around Lago Moreno, past a small waterfall that provides Colonia Suiza with its water, arriving at the Picada Jakob after one hour. If you have private transportation, you can drive straight to the trailhead and cut 6 km off the walk. There used to be irregular bus service to the trailhead, but I believe that it is not available at this time (March 2013). 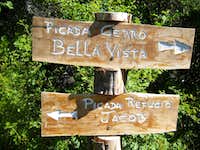 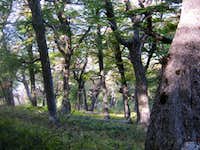 From the trailhead, turn up the road, pass by a ranch, and follow a wide obvious path, arriving at a well-marked trail junction within 10 minutes. The main trail heads left for 18km up to Refugio San Martín (Laguna Jakob). The right fork will take you to Cerro Bella Vista. 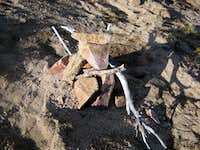 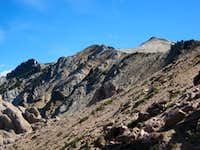 The trail has a few forks right at the start, mostly just paths heading over to the river, but large cairns marked the appropriate path at a couple key junctions early on. From there on, you're in for a steep climb that only gets steeper, until it arrives at tree line after an hour and a half. 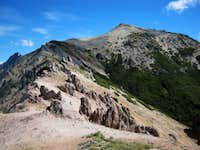 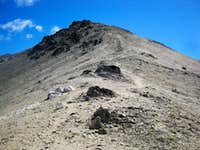 Make sure to take note of where you leave the woods, as this is the only tricky part on the descent, then follow a faint trail up a scree slope to the ridge, then follow the ridge up to the summit an another half hour.

The summer season in northern Patagonia runs from mid-December to mid-March. The weather is likely to be nicest in the area during that time. Because of it's relatively low elevation, conditions should be pretty mild on Cerro Bella Vista between November and May. Due to it's proximity to Colonia Suiza, winter ascents shouldn't be much of a problem, but be prepared for snow.

The peak can easily be climbed in a day and there are no recommended campsites on the mountain itself. The most logical camping options are at one of the developed fee campgrounds in Colonia Suiza: Camping Goye or Camping SER. Alternatively, spend the night at one of the hotels, hostels, cabins, or campgrounds in and around Bariloche. If you really want to camp near the hike, there are few nice camping spots along the trail to Refugio San Martín (Laguna Jakob) about ten minutes after it forks off from the Cerro Bella Vista trail.