Cerro Catedral is the country highpoint of Uruguay.  The nation officially named the República Oriental del Uruguay is not known for its mountains.  In fact, Cerro Catedral is the lowest country highpoint in South America.  Uruguay is perhaps best known for its gaucho culture, the asado, and yerba mate.  The gaucho is essentially the South American version of a cowboy.  An asado is simply a barbeque, generally involving good quality local meat and wine.  Yerba mate is the national beverage of Uruguay; a sort of green tea that one drinks with a straw.  Of Uruguay's 3 million people, roughly half of them live in the capital city of Montevideo, a colonial city with a lively Carnival celebration and a thriving music scene.  One popular type of music is candombe, a remnant of Uruguay's African slave history best expressed in the form of groups of drummers marching through the street followed by dancing spectators. 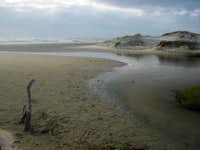 Many foreigners visit Uruguay during the summer for its beaches which range from the high end, super fancy Punta del Este to the many laid back beaches in the department of Rocha.  Another popular tourist destination is Colonia del Sacramento, a quaint colonial town on the shores of the Río de la Plata that is connected to Buenos Aires via a ferry.  There are also some popular hot springs resorts located in the interior, close to the Argentine border.  Of course, I don't visit Uruguay for the sites, but rather for the people.  I personally don't know of anywhere else in the world where the people are as laid back and down to earth as they are in Uruguay.  If you're looking for adventure, it abounds in South America, most notably in the Andes and the Amazon.  If you're looking for a nice quiet place to sit back, relax, drink some mate, stare at the sky, and slow things down for a bit, Uruguay is the spot.

Getting back to Cerro Catedral, I climbed this peak several years ago.  I did not carry a camera at the time and my memory of the hike is somewhat vague, so please feel free to contact me if you have more detailed information and/or pictures that I can incorporate into the page.  The peak itself is more of a hill than a mountain, but it qualifies for the list of South American Highpoints and I believe that it is the only Summitpost Mountain Page in all of Uruguay.  The hike itself is entirely non-technical, but the summit does offer nice unobstructed views of the surrounding countryside.  With a private vehicle, you can drive to within 5-10 minutes of the summit.  Via public transportation, the hike is a long walk on a dirt road, but it can be completed comfortably within a day.  If you're looking for an easy way to bag a country highpoint, Cerro Catedral is the spot. 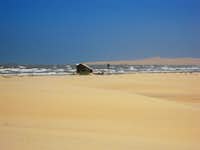 However, there are numerous other hiking destinations in Uruguay that are much more interesting in the way of natural beauty.  Cerro Pan de Azucar is probably Uruguay's most famous peak and although it is more than 100m lower than Cerro Catedral, it is reputably a more interesting and more popular hike.  There are also an abundance of hiking options in the nearby Sierras de Rocha, which includes small peaks, creeks, and native forests.  Finally, let's not forget the coast.  Quaint sandy beaches abound and Uruguay's coastline includes everything from fancy developed resorts to abandoned beaches.  The sand dunes between Cabo Polonio and Valizas are definitely worth checking out.  Santa Teresa, a small preserve run by the military close to Chuy and the Brasil border, is also quite nice.  And, of course, there are undoubtedly countless other beautiful spots to visit on the coast, in the interior, and beyond.

Montevideo has a fairly large international airport.  Many people go to Uruguay from Buenos Aires on a ferry that crosses the Río de la Plata.  The most popular option is the Buquebus, but there are several other local alternatives that may be a bit cheaper.  Most offer bus connections at least as far as Montevideo.  From Montevideo, a 2 hour bus ride should take you to either Punta del Este or Maldonado.  From there, a half hour bus ride takes you to San Carlos.  I suppose there are direct buses from Montevideo to San Carlos.  I will describe the route to the peak from San Carlos, although there are undoubtedly other ways to get there.

Cerro Catedral is best accessed from Highway 39, roughly 50 km north of San Carlos.  I believe that the bus from San Carlos to Treinta y Tres passes by there several times daily.  There may be other alternatives.  The person that sells you the ticket in San Carlos may not understand where you are trying to go.  Look carefully at the map and make sure that the bus you are taking will be traveling up Highway 39.  I believe that the turnoff for Cerro Catedral is unmarked, but the bus driver will almost certainly know where to drop you off if you explain that you want to go to Cerro Catedral.  If you don't speak Spanish, this will all be very complicated, but you'll probably figure it out one way or the other.

From the turnoff where the bus leaves you, there is a dirt road that heads up towards the peak.  I believe that the walk is about 15km along this dirt road, although I don't really recall the exact distance.  Under any circumstance, it is quite far, but you can make it within a few hours.  The slope is quite gentle, but there is no shade, and the only water source comes near the beginning and did not seem to be particularly clean.  After several hours walk, you will find yourself approaching the summit.  It's fairly obvious where it is.  At some point, leave the road, hop over / crawl under the cattle fence, and climb up to the small rock outcropping that marks the summit of Cerro Catedral.  The summit is no more than a few hundred meters from the dirt road.

If you have a car, you should be able to drive the ~15km up the dirt road, reducing the hiking time from several hours to a few minutes.  Even a low clearance vehicle should be able to make it.  Of course, the turnoff from highway 39 is unmarked, but you should be able to figure it out with a good map.  If relying on public transportation, make sure to confirm the return schedule with the bus driver in the morning.  If you miss the last bus, you can always try to hitchhike back to town, but there is relatively little traffic on this route.  On the walk back down the mountain, you'll be able to cut a few switchbacks to reduce the distance, but not by much.  Again, I don't really recall the details, but expect about 6 hours hiking round-trip if starting at the Highway 39 turnoff.

Climbing Cerro Catedral should be possible year-round.  The summer (mid-December to mid-March) is generally quite hot.  The winter (mid-June to mid-September) is generally fairly mild.  I imagine that spring or fall are ideal, but it shouldn't really matter all that much.

I wouldn't recommend camping on the mountain.  As mentioned earlier, the only water source is a small ditch creek a couple kilometers from the highway, but it didn't seem like an ideal drinking source due to cattle grazing in the area.