Cerro Ciento is located in the Boulder Mountains of central Idaho. 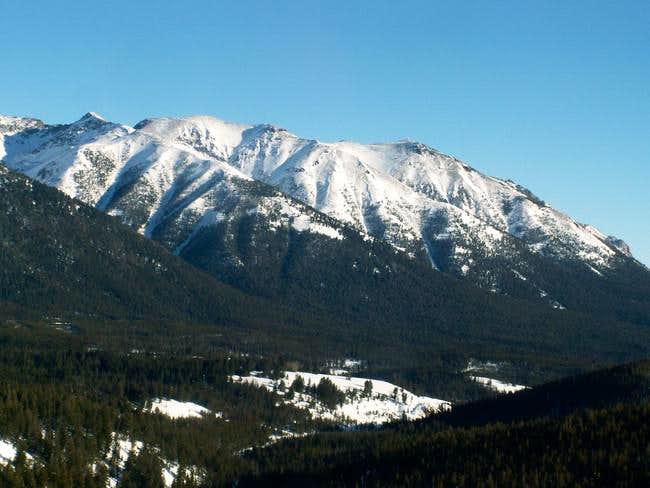 Cerro Ciento is located on the main crest of the Boulder Mountains one foot higher and two miles east of Galena Peak and less than one mile north of Easley Peak.

Cerro Ciento's terrain is comprised of all the common characteristics that make the Boulder Mountains spectacular. Its steep western slopes rise more than 4,000' in less than three miles from Highway 75 presenting a daunting challenge for scramblers as it is, of course, all on incredibly rotten rock. And while its east face, which plummets into the remote South Fork East Fork Salmon River, may not be one of the largest faces in the range, it is certainly one of the most rugged. Views from the summit into the wilderness behind the Boulder Front are all encompassing and are mesmerizing.

Cerro Ciento is most likely climbed by people who may mistaken it for Easley Peak nearby. Although the traverse between the two is easy, they are two distinct, seperate peaks. Cerro Ciento is one of those rare mountains in Idaho that may see more traffic in the winter in the summer as it is near the back country ski haven of Galena. The easiest route is a class II climb from Spring Creek but be advised, this crumbling mountain looks closer than it is.

To access Cerro Ciento from Hailey, Idaho, drive north on Highway 75 for 13 miles to Ketchum, Idaho. Continue through Ketchum for about 24 miles until reaching a large bend in the highway. To the left is the pullout for Owl Creek and the place to park if ascending in winter.

Turn right onto the easily missed Spring Creek Road shortly after the pullout for Owl Creek if climbing in summer. Follow this four-wheel drive necessary road alongside a stream until it steeply switchbacks up a hillside. Look for an even fainter road continuing uptream and follow it until it peters out shortly.

Be sure if ascending in winter to check on local avalanche conditions as there have been related fatalities in recent years.

A surprising amount of mountain goats roam the slopes of the Boulder Range, please be sure to stay away and respect these creatures.

The Spring Creek Road is closed in winter.

This mountain may be climbed almost year round. In summer, the rotten rock that plagues the slopes make for a short but very exhausting climb. In winter, the deep snows and avalanche danger make the possibililty of an ascent equally as difficult as in summer but without dealing with loose rock.

Camping is not recommended on Cerro Ciento, the terrain is too rugged and exposed.

There is not enough room at the trailheads so Baker Creek Campground, located nearby, would be a camper's best bet.

Cerro Ciento has no reporting weather stations on the peak itself but nearby the Galena SNOTEL and Galena Summit SNOTEL provide current conditions in the area year-round.

These other links will also provide good information for local conditions.