Cerro Gordo (Spanish for 'fat hill') is a mountain belonging to the Iztaccíhuatl massif, in the state of Puebla in south-central Mexico. At just below 3800 m a.s.l. (official altitude: 3780 m; my measurement: 3798 m), it is the last feature of significant prominence (~200 m) before reaching Paso de Cortés, the famous mountain pass between Popocatépetl and Iztaccíhuatl volcanoes, from the east (Puebla). 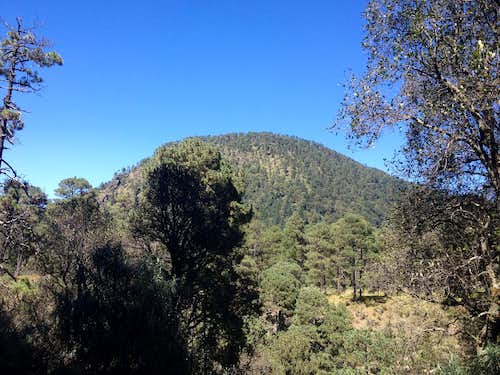 Cerro Gordo
Although pretty unspectacular if viewed as a "challenge", Cerro Gordo allows you to have a beautiful view —undoubtedly, one of the best— of both volcanoes, as well as of the Valley of Puebla, including Malinche and Pico de Orizaba... on a clear day, that is! ;) Also, as it is rarely ascended, having the hill all for yourself is a pretty awe-inspiring experience that I would definitely recommend.

Cerro Gordo is best accessed from the entrance of "Buenavista Villa Turística". This is a fraccionamiento, i.e. a gated community; nevertheless, the gate is open most of the time and you won't have to give any explanations to anybody. Descending from Paso de Cortés, take the left here and follow the road. Once inside Buenavista, follow the signs to the Ermita del Silencio ('Silence Hermitage'), a religious retreat at the foot of Cerro Gordo. Go around the hill clockwise to catch the trail.

There are a few intersecting dirt roads into the woods. On "External Links" I link to the trail I took. The trail head is at an intersection. From here, go uphill, take a left turn, and on the next (bigger) right turn, leave the road and take a smaller path into the grassland. The path is not very clear and somewhat disappears from time to time, but as the ascent is pretty frank and there are no major obstacles (barring a small gully), you can really just ascend cross-country.
The way up mustn't take you more than 40 minutes. On the top, enjoy the scenery and the silence. You can follow the ridge northbound, where you'll find a small path back down.

Cerro Gordo is just at the ecotone of Pinus hartwegii forest and zacatonal, the typical Mexican montane shrubland. The biodiversity consists mainly of grasses (Muhlenbergia macroura and the like), but there are also a few colorful flowering plants like Sedum goldmanii, Penstemon gentianoides, Roldana angulifolia and Cirsium ehrenbergii, all of which are commonly found at similar elevations in central Mexico.
You will also find spiny lizards (Sceloporus grammicus), as well as a number of falcons (like the sparrow hawk, Falco sparverius) and jays (Cyanocitta stelleri). The highlight is probably the volcano rabbit (Romerolagus diazi), locally known as zacatuche (zacatochtli, 'grass rabbit' in Nahuatl), which is a critically endangered species endemic to the mountains around Mexico City.

As it isn't too technical, a pair of trekking shoes and a wind jacket, as well as a bottle of water and a small snack, should be enough. Don't forget your camera! 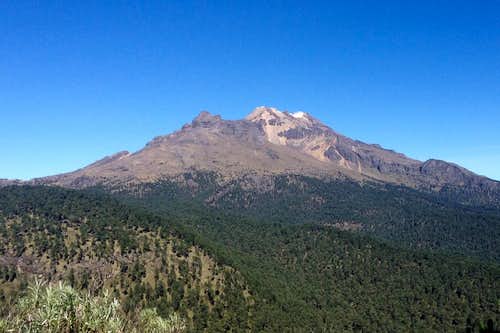 Iztaccíhuatl from the summit of Cerro Gordo