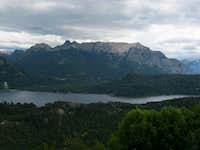 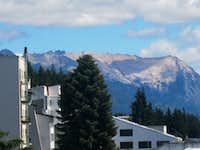 Lopez from my Apartment

Cerro Lopez is Bariloche's most famous alpine peak.  It is visible from town, the access is easy via public transportation, a good trail leads to a mountain hut at the base of the climb, and a climber's trail continues to the summit ridge which offers fantastic views in all directions.  Although it is a very touristic peak, a trip to Cerro Lopez is deservedly one of Bariloche's classic mountain experiences that should not be missed by any lover of mountains visiting the area.

There are a variety of ways to reach Cerro Lopez.  The normal route starts at the Arroyo Lopez Trailhead and climbs steeply to Refugio Lopez on a well-maintained trail in 2-3 hours.  Alternatively, there is an easy 4 x 4 road that allows one to drive to within a 30 minute walk of the Refugio Lopez.  From the refugio, the peak can be reached with an additional hour of hiking.  A more adventurous option is the Palotinos Trail which is a steep scramble from Bahía Lopez that ultimately follows a spectacular ridge up to the peak in 4-5 hours.  The final common approach is from Laguna Negra as part of a popular 31km circuit linking Refugio Italia and Refugio Lopez. 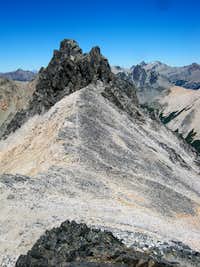 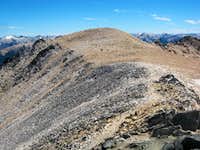 Pico Turista
Regardless of the approach, most trekkers settle for the non-technical Pico Turista, which is reached by a well-defined climber's trail.  The more challenging true summit of Cerro Lopez can be attained via a challenging technical scramble which requires a small detour around the summit block or an alternative approach to the summit ridge.  A third named summit, Punta Norte, is particularly prominent from town and is best reached via the Palotinos Trail or a lengthy ridge traverse. 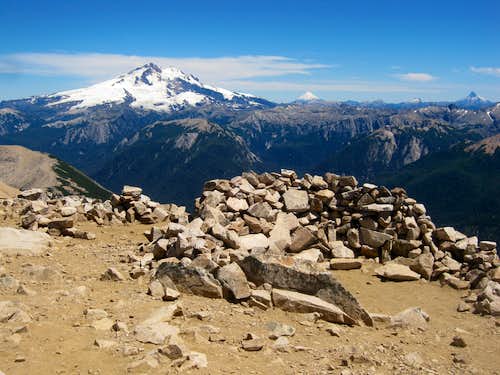 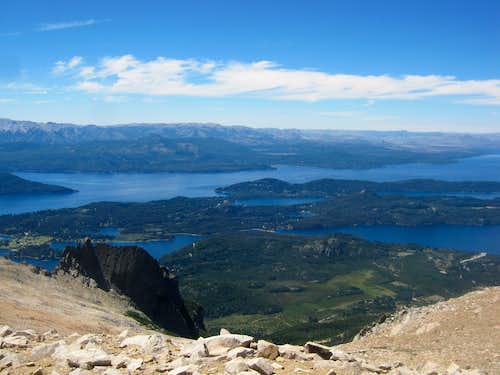 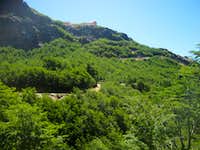 Auto Road
The primary departure spots for Cerro Lopez are all near Colonia Suiza, a small tourist center on the shores of Lago Moreno.  From Bariloche, several buses leave daily for Colonia Suiza.  The trip takes roughly one hour.  If starting in Colonia Suiza, return to the bus stop, turn right at the Berlina Brewery, follow the dirt road ~4km to the junction, turn left and follow the asfalt ~100m to reach the Arroyo Lopez Trailhead on your left.  This is the start of the Normal Route.  If coming directly from Bariloche, you can have the bus drop you off at the junction near the trailhead. 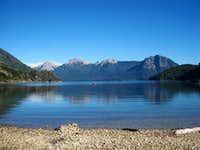 Bahía Lopez
Alternatively, the Palotinos Trail starts at Bahía Lopez, ~3km further down the paved road.  Some of the buses to Colonia Suiza will continue to Bahía Lopez, consult with the driver to make sure.  For those approaching Cerro Lopez via Laguna Negra, the trailhead is on the left ~1/4 km from Colonia Suiza along the way previously described.  The auto road to Refugio Lopez leaves the main road ~1/2 km past the Laguna Negra Trailhead, also on the left. 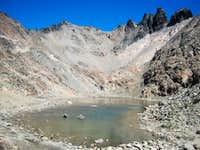 I have not yet hiked up the trail from Arroyo Lopez to Refugio Lopez, but hope to get there shortly, at which point I will develop a more detailed route page.  From the trailhead, the hike should take roughly two hours until meeting up with the auto road.  At this point, turn right, follow the road to its end and continue up the trail for a half hour until reaching Refugio Lopez.  From the refugio, a steep trail continues uphill for another half hour to a small lake in the sector referred to as Hoya de Lopez.  Crossing the lake on the right, the trail continues steeply up to the col that is the pass to continue the trek to Laguna Negra.  From here, turn right and traverse the ridge up to Pico Turista.  To continue to Punta Norte, follow the ridge out for another kilometer.  For the true summit, it is best to climb up to the ridge directly from the lake and scramble up the back side of the peak. 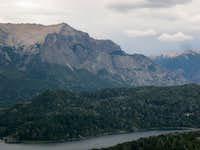 This is the route I took to climb Cerro Lopez, descending via the auto road.  I intend to make a separate route page for the Palotina Trail, but will leave the details below in italics until I get around to it.  From the bus stop at Bahía Lopez, walk through the grounds of the hotel to the beach, turn left and enter the woods to meet up with the trail to Punta Panorama, and follow the trail 20 minutes to the viewpoint.  From here, the formal trail ends, but follow cairns up through trees and rocks for almost an hour until reaching a steep 10m climb that is the route's crux.  Continue up through brush and scree along the ridge for another hour to reach a vertical cliff.  Bear right and follow scree back up to the ridge, then walk the ridge out, arriving at Punta Norte after another hour.  Traverse the ridge one kilometer more to Pico Turista.  For the true summit, continue along the ridge to the col, traverse below the left side of the peak, and climb the peak from the back side.


From the main road at Bahía Lopez, pass through a gate and enter the grounds of a hotel.  The hotel is private, but the beach is open to the public.  Walk to the beach, take in the view, and turn left and follow along the coast, enter the woods, and meet up with a trail heading to the Mirador Brazo de Tristeza.  The formal trail leads in 20 minutes to the scenic viewpoint on an exposed rock at which point it ends.

From here, the route climbs steeply upwards, through the trees and through the rocks.  Small cairns mark the way, but they can be difficult to follow at times.  The first part scrambles upwards through some small cliffs, then the path follows through a more densely vegetated area where it can be difficult to find.  Keep heading upwards and eventually the terrain opens up and the cairns reappear.  Less than one hour in, there is a part that requires a steep 10m climb that is not especially difficult, but it is committing.  This is the crux of the route.  From here, continue scrambling steeply up rocks and you will soon arrive at a sort of plateau on a well defined ridge.  From here, for the first time, you can see most of the route up the mountain.

For the next hour, you will be climbing up scree and talus, occasionally passing through small patches of brush.  Follow the ridge up and over several bumps, still following the occasional rock cairn.  At a certain point, the ridge dead ends at a steep vertical cliff.  It may seem that the route veers off to the left, but in fact it bears right, follows the scree around the cliff, and then continues to climb up the talus slope.  Eventually, you will reach the main ridge, giving you your first views of Bariloche and the Refugio.  Follow the ridge up a little more and you will arrive at the Punta Norte.


From Punta Norte, follow the ridge south for one kilometer to reach the Pico Turista.  The Pico Turista is something of a rounded mound that is actually higher than any of the more serrated points on the ridge that you will cross before.  This entire ridge walk is quite easy, but is fun and has incredible views on both sides.  From the Pico Turista, follow the ridge further and you will run right into the summit block for the main summit.  To climb the main summit, it is best to drop down to the left, cross underneath the summit block, then climb up the ridge on the backside and attain the summit from there.

For the descent it is recommended to descend via the normal route.  From the col right before the main peak, drop down to the left and follow a faint trail down to the lake and then the refugio.  From there, descend to Colonia Suiza via either the auto road or the Arroyo Lopez trail.

The summer season in northern Patagonia stretches from mid-December through mid-March.  Conditions on Cerro Lopez are generally best during that time. Spring and fall attempts should also be feasible, but be prepared for inclement weather and/or lingering snow. 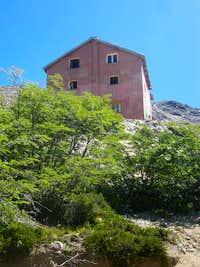 There are several campgrounds in Colonia Suiza, including Camping Goye and Camping SER.  Camping is permitted at Refugio Lopez and there are campsites available at various spots in the forest along the Arroyo Lopez Trail.  The small lake above Refugio Lopez would make for a pleasant bivy.  Camping is permitted at Laguna Negra and there are a few potential campsites between the two refugios.  Camping is not recommended along the Palotinos Trail, as it is extremely dry, but some sort of makeshift campsite could probably be found near Brazo Tristeza.