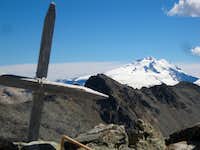 Cerro Navidad is a popular trekking peak in Parque Nacional Nahuel Huapi.  The summit itself is a non-technical hike, but there are also several established multi-pitch trad routes on the mountain.  The peak can be climbed as a day hike from either the Laguna Negra trailhead or the Picada Jakob trailhead.  However, most people will prefer to spend a night at either Refugio Manfredo Segre (Laguna Negra) or Refugio San Martín (Jakob) or climb the peak as part of a challenging cross-country trek between the two huts.  The summit itself offers stellar views that include Cerro Tronador, Cerro Catedral, Cerro Negro, Cerro Cuernos del Diablo, and Cerro Capilla.  Due to it's relative ease of access and it's excellent views, Cerro Navidad comes highly recommended for climbers, hikers, and trekkers visiting the Bariloche area.

The principle trailheads for approaching Cerro Navidad are the Laguna Negra Trail and the Jakob trail.  Both are accessible from Colonia Suiza.  From Bariloche, Colectivo 10 (and 11) has several daily departures that leave for Colonia Suiza, arriving in roughly one hour. 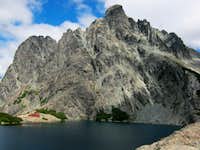 From Colonia Suiza to Laguna Negra is a 14km hike that takes roughly 3 hours.  From the bus stop in Colonia Suiza in front of the Berlina microbrewery, follow the road back towards Bariloche for 100m to reach the Laguna Negra trailhead on your left.  Follow the trail through Douglas-fir and then cypress and then coihue forests for roughly one half hour until reaching the Arroyo Goye near a potential campsite and some popular swimming holes.  Continue to follow the trail up the creek for another hour and a half to reach Rancho Manolo, a popular campsite near a waterfall.  From here on, the steep part begins.  An hour of climbing with spectacular views of Cerro Negro, Cerro Navidad, and a series of impressive waterfalls will lead you to Refugio Manfredo Segre (a.k.a. Refugio Italia) on the shores of Laguna Negra. 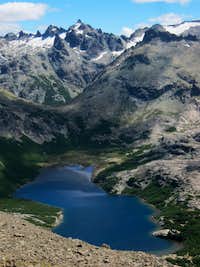 From Colonia Suiza to Jakob is a 24km hike that takes roughly 5 hours.  From the bus stop in Colonia Suiza, choose either the road through town or the road to Villa Catedral.  The two roads meet on the other side of town and continue to lead you around Lago Moreno, past a small waterfall that provides Colonia Suiza with its water, arriving at the Picada Jakob after one hour.  If you have private transportation, you can drive straight to the trailhead and cut 6km off the walk.  There used to be irregular bus service to the trailhead, but I believe that it is not available at this time (February 2013).  From the trailhead, turn up the road, pass by a ranch, climb up the hill, and drop down to the river near a series of popular swimming holes known as Piletones de Jakob.  From here, the trail continues up the river on its right side until crossing a bridge two hours from the trailhead.  The trail crosses over to the left side of the river, continues across fairly flat ground for another hour, and then climbs steeply for another hour until reaching Refugio San Martín on the shores of Laguna Jakob.

Two principal routes will be described, one via Laguna Negra and one via Jakob.  Under each of those routes, I will describe a cross-country alternative for those looking for a greater challenge. 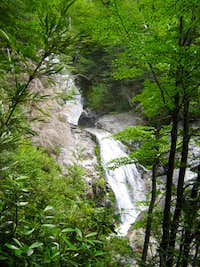 From Laguna Negra, a cross country route leads to Jakob.  This route more or less passes right over Cerro Navidad.  The route actually takes off from the Laguna Negra Trail long before reaching the hut.  On the way up, shortly after passing Rancho Manolo at the base of the climb you will pass by a waterfall somewhat hidden on your right.  Soon after you will come to a creek crossing.  The route follows cairns and painted rocks right up this creek.  If coming from the refugio, descend the switchbacks and look for this route at the second creek crossing. 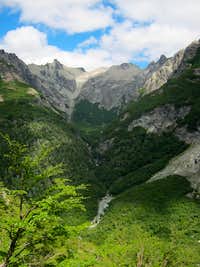 The route can be difficult to follow, but it generally follows up the left side of the creek until reaching a creek junction, at which point it crosses the creek and follows predominantly scree fields up to the jagged ridge between Cerro Negro and Cerro Navidad.  When you reach the ridge, you're almost there, just follow the ridge up to the flat summit of Cerro Navidad that is crowned by a cairn and a large cross. 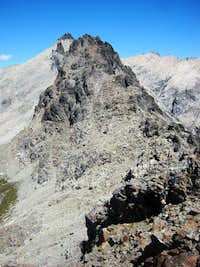 Alternatively, follow the side creek briefly, but soon climb steeply up the ridge on your left.  This alternative route starts by climbing some steep imbedded cliffs, then passes through some brush but soon reaches the ridge, at which point it follows fun slabs up to the first false summit.  The route to the true summit then passes over or around several tedious false summits, but provides a challenging alternative ascent that allows for a loop hike descending via the normal route from Laguna Negra / Rancho Manolo. 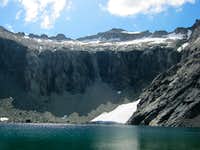 From Jakob, a cross country route leads to Laguna Negra.  This route more or less passes right over Cerro Navidad.  The route begins by hiking up to the Laguna Los Tempanos, a beautiful lake 30 minutes past the refugio that holds snow late into the summer.  From here the route climbs through rough terrain to the right of the lake and to the left the impressive Pico Refugio to reach the ridge between Pico Refugio and Cerro Navidad. 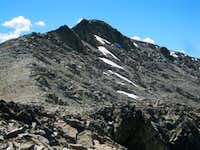 From the ridge, you can see both Laguna Los Tempanos and another small lake on the other side formed by another fork of the Arroyo Casa de Piedra.  Follow the ridge out, circumnavigating this small lake from way above, ultimately descending a bit and climbing up the other side to reach the flat summit of Cerro Navidad that is crowned by a cairn and a large cross. 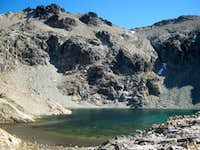 As an alternative descent route, head back to the col between Cerro Navidad and Pico Refugio and descend to this small lake.  The terrain is actually quite nasty at times, mostly due to brush, but occasionally with cliffs as well, but the landscape is gorgeous.  This route is not for everyone, but the adventurous can follow the draw and descend all the way down to the main trail that leads to Refugio Jakob.

The summer season in northern Patagonia ranges from mid-December through mid-March.  Conditions are likely to be best on Cerro Navidad during this time.  From December through April, the peak should be fairly accessible.  November or May may also be reasonable in some years. Approaching the peak outside of this time frame will provide a considerable challenge.

There are several developed campgrounds in Colonia Suiza, including Camping Goye and Camping SER.  You can camp for free at both Refugio Manfredo Segre (Laguna Negra) and Refugio San Martín (Jakob).  Both sites have bathrooms and provide water free of charge.  They also offer simple restaurant service and overnight lodging at fairly reasonable prices.