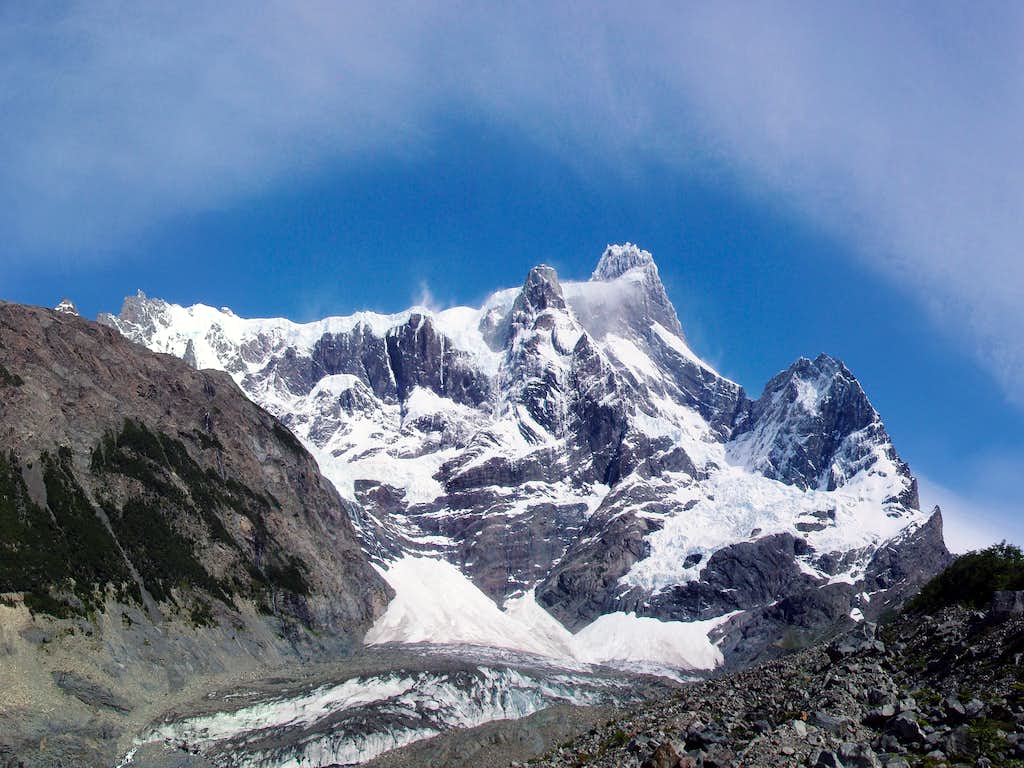 Seen from "Valle Francese". This almost 3000 meter high wall of ice and rock is garding the highest peak inside the Nationalpark "Torres del Paine" in Patagonia/Chile. In one year there are usually just a hand full of days without clouds, to see this majestic mountain "naked". Click here to see a panorama from some distance: Cerro Paine Grande panorama Edit@2012-11-26: since there is a discussion about the true altitude of the summit I changed the "altitude" that was sourced from my "NP torres del paine" guidebook from 3248m to 3000m +-250m. I don't finally trust a GPS measurement by an expedition without any member beeing a geographical expert. A GPS can state very wrong altitudes if there isn't the influence of barometric pressure disabled in the settings. Please inform me, if there is an official correction of the altitude of this peak by Chilean authorities. Since what I experienced during my trips to Chile there are good engineering standards, so it shouldn't be a problem, measuring a peak exactly by using triangulation from the ground.
« PREV NEXT »

mountain and photo. Is strange to see how the clouds make a semicircle over the mountain!

This was one of the most impressive days in my life, since it rained all day before I was bringing up our tent in the forest. Fog prevented any look at sourrounding mountains.
Next morning I woke up and saw the sun, but had to get out of the forest first, to get a look at Paine Grande and then it stood there rising 3000 meters above me.

When I posted this picture back in 2008 this was not known. Strange to me, that the elevation should have been that wrong. A GPS can also show a wrong altitude if it is not calibrated right. Isn't there someone in Chile who can use a triangulation. This should be of national interest.
British engineers already scaled the altitude of Everest better than this actual gap in the 18th century.

Just a question: if you find this picture magnificient, why do you vote it down to 5 out of 10 ???

Over the last couple of years, I've become more and more interested in mountain elevations. When I climb them, it doesn't matter all that much to me if it's a little bit off, but this difference is not little anymore.

Therefore I agree with viewfinder that incorrect mountain elevations have no place on a site like this (or on any other respectable site for that matter).

I've got a topo map of the area, dated 2004, which says Paine Grande is 3050m high. That's an important clue, but I've got many maps with wrong elevations, as shown by later, more accurate measurements. Especially in South America. And in such cases, the later measurements are almost always lower.
Unfortunately the older, higher values just keep circling around, sometimes just copied from other sources, sometimes even actively promoted by officials and the tourist industry. There appear to be non-scientific reasons to claim that a mountain is higher than what it really is. Is it unwillingness to admit an error? Pride? Marketing? I don't know, but the phenomenon exists.

Already back in 2005, in the 3rd edition of "The Andes, A Guide For Climbers", John Biggar wrote that Paine Grande is much lower than the previously reported height of 3050m, let alone 3248m, and he explains how that higher value is not consistent with SRTM data. He gives an estimate of circa 2750m instead. However, although I've used this book extensively over the last years and found it very reliable, I can see how only one reference against many other sources would not be enough evidence.

But there is more. The SRTM data is freely available for anyone to study - I've downloaded some of it myself. And even if you don't, these days, with Google Earth and Google maps based mainly on the SRTM data as well, it's easy to check. Now, SRTM data can be widely off the mark when the terrain is very rugged, especially with a small, steep summit, but Google Maps and Earth put it no higher than 2700m. The 2884m as measured by the 2011 expedition is already a lot higher - in fact, so much so that I want to see more measurements before I believe it to be accurate. But even so, it's another piece of evidence that it is much lower than 3050m.


Interesting as all this may be, I won't down vote an image because of it. I'll just refrain from voting.

Please see my edit in the title and the underlines.
Please look at http://andesgear.expenews.com/en/expeditions/197/dispatches/2900
and especially at http://andesgear.expenews.com/assets/images/dispatches/1fe29413c2d39dd1ca9ff4013471c215b575fe9b66f60dc4506001e61dc4a99b.jpg
This summit picture could have also been taken in my garden. Kind of strange if compared to the other images "around" the plateau sourounding the summit in daylight and clear skies.
Also strange to me that there is a lot of snow fall (or blown into the air snow? On top of an ice mushroom?!) in the first summitpicture and no snowfall in the second. If you follow the timeline in the pictures ID it's hard to understand why the expediton didn't reach the summit at 2011-08-13 in fine weather during a long day, then returned to their tent the same day at 17:32 hrs (to eat? to rest for some hours??!) and then to finally go out again after some hours in the tent to climb the summit on 2011-08-14 at 03:24 hrs (what didn't work during the whole day before?!).
Is this summit picture a proof? Does the timeline and the chrono of the pictures make any sense? Is the transported info about a GPS measurement from this expedition a prooven source?
Maybe I am to critical, but this leaves me with at least some questions.
Your statement about SRTM is interesting, but SRTM could lead to wrong conclusions in this case because of the huge plateau around the summit and those sharpe-edged pinnacles peaking out.
PS: another source for my scheduled altitude is: http://www.weltderberge.de/samerika/painegr.htm although this source might also be wrong taking the data from the guidebook.
If Chilean authorities correct the altitude by a ground based triangulation, I will believe that and add/correct that final number.
How hight this peak really is doesn't effect my life at anything at all. Anyway it's beautiful and it definitely is the highest in the Torres del Paine NP.

That's an excellent edit, as it summarizes the discussion about the elevation quite nicely.

I had already seen the andesgear site that you mentioned. I agree that the summit picture doesn't prove anything here, but I go by the rule that when a climber claims to have been on a summit, I accept it until proven otherwise. From the dispatches and the captions with the pictures I understood they made it to the summit on the 14th, but I found it too hard to follow the precise timeline of everything. As for the snowfall in the summit photo, well, with the weather in Patagonia it's amazing that they had so much good weather, I'm not surprised by a bit of snowfall.

However, while I believe they've been on the summit, that doesn't mean I believe they measured the elevation correctly. Your questions about their GPS measurement make sense to me. I mean, it may be correct, but with the large difference from the SRTM data, I would like more measurements before I'm convinced. And perhaps I missed it, but I read very little in their dispatches about how they went about measuring the summit elevation. However, until we have more measurements, from the summit or otherwise, this still supports a much lower elevation than the previously reported values of 3050 or even 3248m.

I totally agreee that for a sharp needle, the SRTM value will be too low. My first interest in this field started when I used Google Earth and Maps to look at some of the peaks I had climbed, both in the Alps, where heights are known quite well, and in the Andes, where there are some question marks, and saw Google Earth and Maps commonly report lower values than the maps and the guidebooks. In the Alps the differences were almost always less than 50m, in the Andes I've seen bigger differences. I'm still trying to understand to what extent that reflects the quality of the reported elevations, artefacts and inaccuracies in the SRTM data, or both.

The limitations of SRTM data can be especially obvious if you switch back and forth between the satelite image and terrain view. If you've been there, you can sometimes recognize the actual summit, while at the same time terrain view (and Google Earth) put the summit somewhere else.

Fascinating stuff, these digital elevation models. But it's only a model, and you have to know a bit about their limitations to use them properly. Like you say, a sharp pinnacle is not exacly captured properly.

I just had a look at Grossglockner on Google Maps, because I remembered that the summit was rather small. The terrain view puts it between 3720 and 3740m. With the generally accepted summit value of 3798m, this single case shows that, even for a well known mountain, a difference of 60-80m is quite possible. However, I must add that for most peaks in the Alps, the differences that I've seen are smaller.

As for practical reasons, unless I'm going to climb it, or have to fly over it, it doesn't matter how high exactly it is. And regardless of the elevations, if the weather is clear, Torres del Pain is breathtakingly beautiful.

Following the elevation amendment to "3000+/-250", I have withdrawn my vote. The true elevation is within this range. The 2884m claim was made by Chilean mountaineer Camilo Rada. To the best of my knowledge he is a respected authority on topographic and GPS matters. I would be amazed if he were lying about reaching the summit, and very surprised if he took the summit GPS reading in barometric mode. It is unlikely to be accurate to the nearest metre but I would be surprised if the error exceeded 20 metres. There are no SRTM data for the summit area. Google would have estimated the height by extrapolating the nearest data.