This is a nice very nice hike if you only have 1 day to hike and you're in Santiago. I was in town on business and wanted to get into the Andes, but I only had limited time. This hike is spectacular putting you up into the foothills of the andes (9000+ ft) with majestic views of Santiago below. It is a significant undertaking though with 5700+ feet of elevation change and the round trip hike is close to 20 miles if you don't get too far off the trails.

This is a little tricky if you don't have a car and don't know the area well. You either need to take a taxi along the Costanera Norte or Las Condes towards Camino de Fallarones or ride a bus to Plaza de San Enrique and catch a taxi from there up the Camino de Fallarones. I took a taxi from near down town Santiago and it was pretty expensive (~$30-40 US dollars). Around kilometer marker 6, there is a dirt road that goes off towards the right towards the old bridge (Puente Ñilhue). If you cross the river on the new paved bridge, you know you've gone too far and you'll need to double back to find the dirt road to the south of Camino de Fallarones. Once you get to the dirt road, the trail head lies several hundred yards up the road. 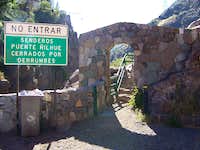 In order to enter the trail head, you have to register and pay something like 1500 pesos, which translates into roughly 3 US dollars. Then you pass through the gate and begin the climb.

The initial portion of the trail is a scramble up rocks, but there are chains nailed into the rocks facilitating the climb. This is the most 'technical' part of the climb. The remaining ascent is hiking with a few areas where you may need to scramble up some rocks. I found the trail was marked very well at the beginning, but as you go further along, it was difficult to know exactly which was the right trail. I hiked early in the spring on a week day and was the only one on the mountain as far as I could tell. There were a couple of dogs hanging out around the trailhead and two of them followed me all the way to the summit. Early on in the climb I found myself on a dirt road. We (the dogs and I) followed it around and completely missed a turn off of the main road (on the left) and came to a fence of a private estate nestled high above the valley floor. I retraced about 1/2 a mile and found the correct trail. As I rose up out of the lower portions of the hill, I knew I just had to keep going up. I passed by the plateau of Alto del Naranjo and saw some cattle grazing in the shade of the tree. Since it was spring, the air temperature was perfect (a little cool, but just right with the heat my body was generating with the climb). The best part was the spring wild flowers.

I have to admit, this was a considerable climb for me. I was in reasonably good shape, but hadn't attempted a hike with ~6000 feet of elevation change in a single day. I stopped to rest near the top (I subsequently I discovered it was only 200 feet shy of the peak).

I ate lunch and looked out over the central valley of Chile. Then packed up and finished it off the last little bit. I was pretty tired, but I think the dogs were even more tired. I shared some of my water and lunch and they just snarfed it up.

The descent was much faster than the climb, but I did get off the trail and had to cut back from one ridge to another to get on the right trail. At this point, one of the dogs quit following me and continued down the ridge. Maybe he knew the right way and I should have been following him. I cut through brush and across a rock slide. The terrain reminded me of the mountains of my home state of Utah. Dry, rocky, dusty, hot, exposed. I finally made it back down, happy with the exhaustion and alive with the experience. There is no scheduled public transportation as far as I can tell along the camino de fallarones, therefore you either need to hitchhike "Hacer el dedo" or walk, or find yourself with a nice park manager as I did. He was so kind to take me back to my hotel, when we realized there wasn't an easy way to get back.