This page will be kept in honour of the SP member Rahel Maria Liu,  the former owner of this page, died on 25 August 2004 on the Innominata Ridge (Monte Bianco) at the age of 34.

The Chèré Couloir is the classic ice gully of the Mont Blanc du Tacul  North Face, which is also known as the Triangle du Tacul.  The route is popular and you should pay attention that not too many people are above you because of the danger of falling ice and other debris.

Since the route is North-facing it can generally be climbed throughout the year. During winter it's a tough but wonderful ice-climb with very good ice, but the risk of getting serious frostbite is significant! Sometimes it's about -30°C while climbing during winter.

The Chèré Couloir is shown as route G in the following overview photo: 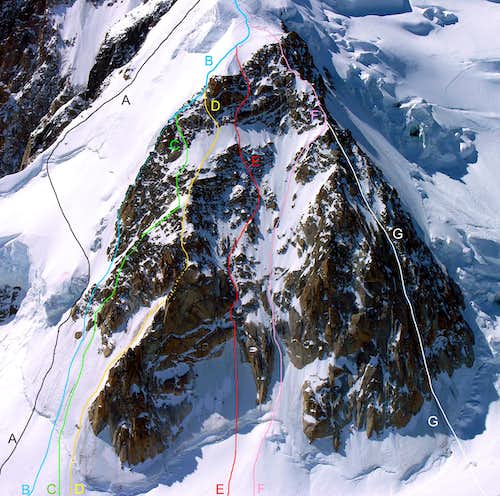 Catch the Telepherique de l'Aiguille du Midi from Chamonix in the morning or start from either the Cosmiques Refuge or Abri Simond bivouac (in winter). The base of the Triangle du Tacul is reached by an easy walk across the Col du Midi.

The Chèré Couloir is a very slender couloir which goes up in the very right part of of the triangle.

After having passed the bergschrund, you climb to the first steep step. The ice becomes steeper and steeper (at the beginning 60°, then 70° and 80°). After a less steep passage, you have to climb over the second very steep passages with 75°. At the end, you climb on the right side of the mixed ridge until you reach the end of the triangle.

Many parties only climb the first 5 or 6 pitches, which are the steepest, and then abseil the route by the same way. Most of these initial pitches have in-situ bolted belay stations.

From the end of the rock at the apex of the Triangle du Tacul (3970m) there are various options for descent, and the best choice will depend on the snow and serac conditions on the NW flank, which can be a bit treacherous at times - due caution is advised!

Two technical axes, a few ice screws and some rock protection. Double 60m ropes are recommended if you plan to abseil the route.

Chamonix is a primary destination, offering various kind of accomodation (hotels, huts, gites, renting rooms). Numberless campsites are situated both in the Northern and Southern ends of the town. Main campsites:

You can get excellent information about weather, conditions and routes at the "Compagnie des Guides de Hauts Montagnes" (cieguides-chamonix.com, tel: 50 53 00 88) or the "Maison de la Montagne" at the "place de l'Église" in Chamonix. Don't be afraid to step into their building, its common practice, people are constantly walking in and out. By no means you are expected to hire a guide when you visit. For weather reports you can call 50 53 03 40. In winter the number 50 53 17 11 gives snow conditions and avalanche risks. Mountain rescue is secured by the "Gendarmerie de Haute Montagne", 50 53 16 89

Just to clarify: In Summer the Cosmiques hut is now open so you will be starting from there instead of the Abri Simond (which is closed during the winter)
Also, it is possible to camp on the Valle Blanche in Summer (which is what I did)