First climbed in 1913 by Hec Abel and L.F. Curtis, Chair Peak is an easy access day climb located at the apex of the ridge that begins, from the south, at Denny Mountain, the top of the Alpental ski area. Between the two are Bryant Peak, The Tooth and Denny Mtn. Often difficult to protect, the rock is "partly a pre-Teritary melange and partly a sedimentary member of the Naches formation." (Beckey, 159)

During the summer, the Snoqualmie area is a popular destination for day hikers and rock climbers looking for some of the most accessible and easy alpine trad climbing in the Cascades, but in the winter the area, most prominently Chair Peak and The Tooth, become some of the best moderate alpine ice climbs in the region.

The entire basin between Alpental Ski Resort and Chair Peak is a sought-after backcountry ski destination, but extremely avalanche prone. Many fatal slides have occurred through the years. To attempt this winter climb, a well-rounded knowledge of snow conditions and avalanche potential is mandatory. Check weather and snow reports, test the snow pack on route, and follow the contour of the approach with the least amount of time spent on or around avalanche inclined slopes. Carry beacons, probes and shovels, and most importantly, know how to use them.

Chair Peak is located in the heart of the Mt. Baker Snoqualmie National Forest near Snoqualmie Pass. From Interstate 90, take Exit 52 and head north to the parking lots at Alpental Ski Resort. At 3100 feet, the trailhead(s) are across the street from the ski resort on trail 1013 to Snow Lake. During the winter, look for tracks made by snowshoers and backcountry skiers. Follow the trail through trees with a few open spots to the end of the valley at 1.5 miles and 3700 feet, although in the winter it is often completely covered by avalanche debris, this is the site of Source Lake, from this point the appraoches diverge depending on one's choice of routes, most will either head north to the ridge above Snow Lake or north-west to the basin below the east face.

For summer rock routes, the best months to climb are from May through October. For winter snow and ice routes, climb from December through March. Check weather reports for favorable cold, clear conditions, but the standard routes are likely to be doable whatever the temps (avalanche danger aside).
Because the area is essentially the backcountry zone for Alpental, there are no permits, fees, closures, limitations or parking passes required. As usual, practice leave no trace, violations of this are why permit systems get installed.
Routes
Southeast Face - a class 3-4 scramble from the basin above Source Lake, several variations exist, see Cascade Alpine Guide 1, p.160.
West Face - first ascent in 1928 by Charles Farrer, Frank Lee, and C.G. and Hunter Morrison, a class 4 scramble from Melakwa Lake. 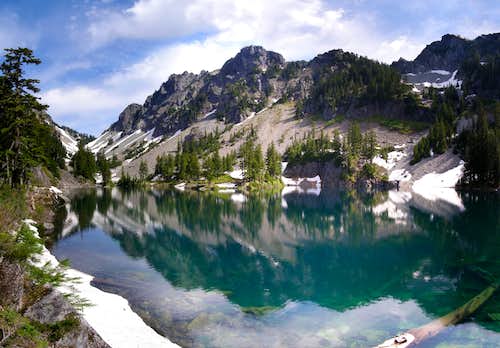 The west face of Chair from Melakwa Lake
Northwest Ridge - first ascent in 1965 by Roger Jackson and Bonnie Krook, a class 3-4 scramble from Snow Lake. First winter ascent in 1975 by Kit Lewis and Robert Harris, likely in the AI3 range.
Northeast Buttress - probably one of the most popular alpine ice climbs in the state of Washington. class 4 in the summer but WI3 5.6 in the winter. 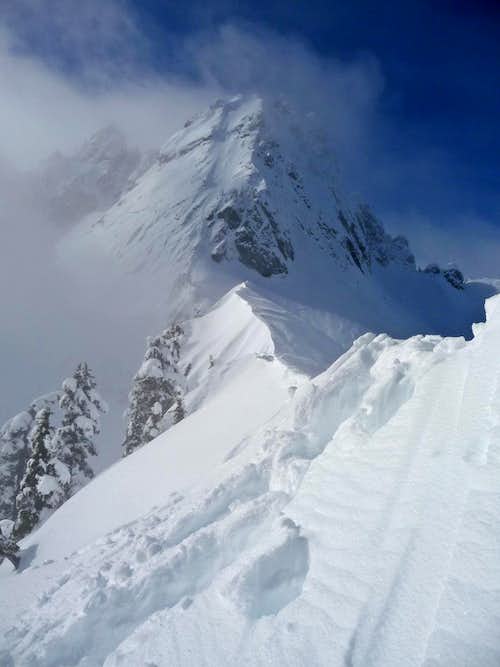 The valley between Alpental and Snow Lake is popular with hikers and campers even in the winter. The ridge between Source Lake and Snow Lake would probably provide the best protection from avalanches, but for climbing purposes this is negligable, as the routes are easily done in a day.

Bryant and Chair Peak in winter

Conditions
For weather reports check NOAA
Be aware that during the winter Alpental may blast for avalanches near the vicinity of the ski resort.
If you climb after a heavy snowfall (not advised), contact the resort at (425)-434-7669 to find out if they will be blasting.
For snow and avalanche information check the Northwest Weather and Avalanche Center
External trip reports
2002 - North Face