Challenge, Danger, and Reward on the Inwood Arete

Generally speaking, I believe in taking the simplest way to a summit. The reasons for this are threefold: why take a harder way when an easier one exists, why not start early and take the easiest way so you can beat the crowds, and why endure the frustration of fighting your way to a summit only to stumble upon others who did nothing harder than follow a trail up some steep slopes? That is why I will never do "true" hikes up New Hampshire's Mt. Washington or up Pikes Peak and Mt. Evans in Colorado; I hate the fact that roads climb them, but I won't use my feet when the multitudes can drive up ahead of me or, worse even, past me. Some would advise me to try winter climbs of such peaks, but I still can’t get excited about the strain and the danger when I can just wait a few months for the road to open. Some will call this attitude lazy or even arrogant, but to me it’s just pragmatic.

Complicating this view has been my increasing dissatisfaction with Class 1 and 2 routes; many Class 3 routes are unfulfilling now, too. I will still take a trail or a simple scramble, but I do prefer something more challenging and exciting. But because I prefer not to climb on a rope, finding routes that are both challenging and reasonably safe (sane) for an unroped climber can be a little tricky.

So when I decided I wanted to summit Quandary, I chose to try the Inwood Arete (the 5.4 version) instead of ascending via the standard East Slopes route. The route, though technical in some places, seemed both appealing and possible considering my ability level and climbing style. Besides, my aging knees, having taken a battering from a lifetime of sports, hiking, and climbing, prefer a good climb to the steep talus of most walk-up routes. 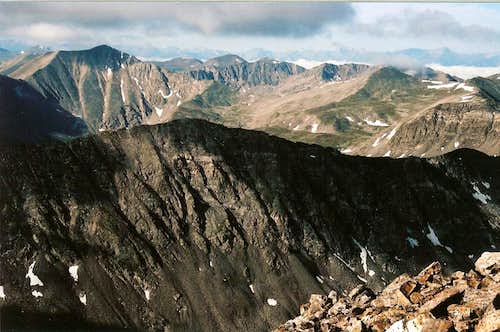 Mount Democrat from Quandary's summit-- click for more info on this view.
I began at 6 A.M. and expected to hit the summit by 9 even though most accounts I'd read seemed to suggest 11 was the more likely time; I arrived at 8:40 and would have been there a bit earlier if I'd found and followed the right route the whole way.

The view was astonishing; I could pick out thirteen other fourteeners, including the Maroons and Snowmass in the Elks, and I knew that I could have identified a few more of the Sawatch had I known their profiles from that perspective. A fresh dusting of snow on the upper reaches of Cameron and Lincoln from the previous night's storms was an awesome touch in August. 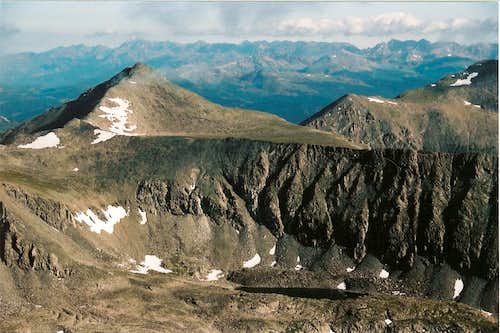 Pacific Peak from Quandary's summit-- click for more info on this view.

A Need for Careful Attention to Details, Good Route-Finding Skills, or a Little Insanity 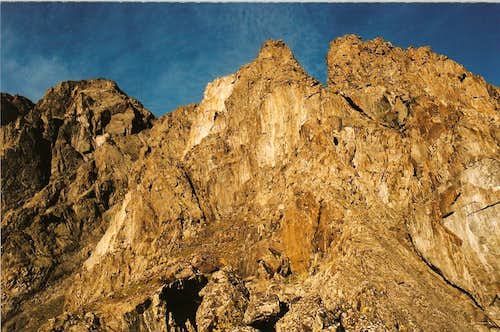 The Towers on the Inwood Arete-- a 5.4 route goes left of them, but I unintentionally made the way a harder one.
If you want to do Quandary and want a challenge beyond the Class 3 West Ridge or the steep but easy (and very crowded) Class 1 East Slopes, try the Inwood (or, when it's in good condition, the Class 4 Quandary Couloir, a snow climb). DO NOT try it if you lack real climbing experience or don't feel comfortable with exposure. I did it free solo-- since I usually have to hike and climb alone, carrying and using rope and associated equipment is cumbersome and impractical for me-- and found it mostly easy. However, make an effort to stick to the route described on the SP page or in Gerry Roach's book; I missed the "correct" way around the towers and found myself at some dead ends and some scary situations that felt tougher than 5.4, though part of that was due to the wet rock (it rained much of the previous night there).

The route was great fun, and I'm glad for it and that I met the challenge, but don't do this one unroped unless you've got some good Class 3/4 experience, route-finding skills, and, above all else, nerve and composure (or a touch of recklessness). There are places on the Arete that are definitely not good places at which to decide you can't go any further. If you doubt that the Inwood is for you, just stick with the standard route, which is a perfectly respectable way to go, but be prepared to have a lot of company.

Again, if you want fun, solitude, and some challenge, take the Inwood Arete. If you belong there, you won't regret it. I did take the Class 1 route down. I imagine that some of the dozens I encountered who were heading up thought I was quite a wuss for carrying a helmet and an ice axe on a walk-up trail.

Quandry was my first 14'er, it was January so I guess I would not want to take this route. But this sounds fun!

I myself like to climb mountains by thier easiest route but preferrably if they are class three/four. I am looking forward to Tetons and some of the harder Colorado 14'ers

Thanks, but why don't you hope? With our preferences for Class 3/4, we could have some good climbs if we ran into each other!

Because of your love of solitude! (I was kidding of course) I do hope to see you out there! there are many great climbs/traverses cant wait to do!

Cool! And I've never done any winter climbs of peaks outside the Blue Ridge, where winter has lately been more a hope than a reality, so my hat's off to you for doing Quandary by any route in winter.

I look to the mountains for escape from people and crowds much like yourself. So often I find myself looking for technical routes just to avoid people. Mt. Washington is such a great exaple. I love what the mountain has to offer most notably Huntington Ravine, but I actually dont go there anymore because of the auto road and the Cog. Quandary is a great name/title here b/c its a thing that all most invariably comes up every time I wish to climb a classic route. I face this dilema almost every time I head out, most of the people I meet on classic routes feel the same way and it can be cool to 'get into the conversations" about such matters.

Re: One of my quotes is

I applied your theory on Mount Evans in Colorado. I drove to the top with my wife and son, we hiked to the summit, and then I just realized I had to do something respectable. So I scrambled down and climbed back up by a route that got me into some tricky stuff around 5.2; it turned out to have been a variation of the Class 4 Snave route. It was cool because I ended up on the summit ridge but away from the summit itself, so people throwing rocks was not a problem. So yeah, I've "bent" my philosophy a bit, seeking more interesting ways up the popular mountains. I'll still never hike up Pikes Peak, but I'd like to try the Y Gullies on it.