Chamlang is a spectacular peak situated in the remote Hongu Valley of Eastern Nepal. In the Sherpa Language Chamlang mean "big bird flapping wings" due to the shape of the mountain. The peak lies about 16km southwest of Makalu and has three majors summits: main (7319m), east (7235m) and central (7180m). 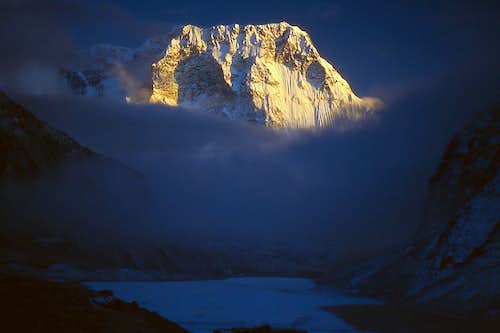 Chamlang in evening light...
The mountain dominates the horizon to the northeast when seen from Mera Peak. 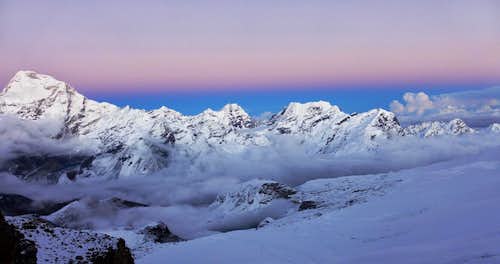 Himalayan Twilight
Chamlang is not a popular peak by any means. I found a few climbing reports (see "External Links") on the Internet but information is far and few in between.

1987 Korean-Nepalese expedition via the south ridge
1990 West face via the west ridge. German expedition
1991 First British ascent via the south ridge
Other Summits
1981 Reinhold Messner and Doug Scott climbed a minor summit (7010m) via the north face (*)
1984 Doug Scott and his party made a east to central summits traversal
1989 East summit via the north face. Dutch women expedition
As far as I know the north face remains unclimbed as of Dec 2015.
These are all I can find. PM me if you know any other.
(*) An interesting tidbit about this expedition: Messner and Scott claimed to have seen some UFO object during the climb 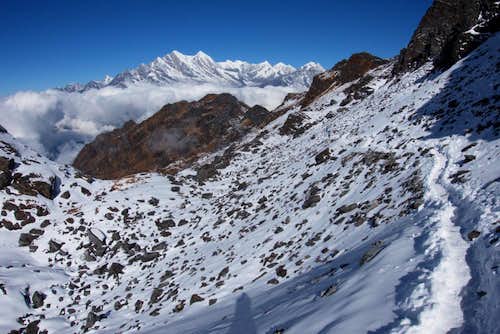 There are many tea houses along the way from Lukla to Khare. However most big groups (mostly to Mera Peak) choose to sleep in tents and use facilities provided by the tea houses.
I also heard (from a lodge owner in Khare) there are now two simple lodges in the Hongu Valley but I can't verify that myself.