The Charles C. Deam Wilderness is Indiana’s only wilderness area. Like many wildernesses east of the Mississippi, it’s not an unspoiled natural area but a land in rehab. The land wants to be an eastern hardwood forest, but the Deam has many stands of planted pines scattered throughout it. Geologically, it’s more like Kentucky, with a rugged karst landscape and even some caves.

The Deam is typical of many eastern preserved lands, with denuded former agriculture lands and previously clear-cut forests. It’s just shy of 13,000 acres in size, which is not big by western standards but is large by the standards of Illinois, Indiana, and Ohio. It was named in honor of Indiana’s first State Forester, Charles C. “Charlie” Deam.

Park in a Wilderness!

The Wilderness Act of 1964 requires that all federally-protected wildernesses be roadless. With some minor exceptions, the Act also prohibits the use of motorized or wheeled vehicles in a wilderness area, which is supposed to be “untrammeled by man,” a place “where man is a visitor who does not remain.”

Interpretation of the Wilderness Act maintains that wildernesses do not require buffer zones around them. This means that a road can go all the way up to, but not into, a wilderness area. Many wildernesses work this way, with a road-accessible trailhead at the boundary of the wilderness area.

The Deam Wilderness takes this practice the next step. There’s a road that runs right through the middle of the wilderness. The wilderness boundaries are drawn up to the road, so you could say that there’s a “north unit” and a “south unit,” about 20 feet apart. There are horse trails 10-20 yards back on either side of the road, inside the wilderness but in view of the road.

As far as I know, this is America’s only drive-through wilderness area.

*This* is a Wilderness? 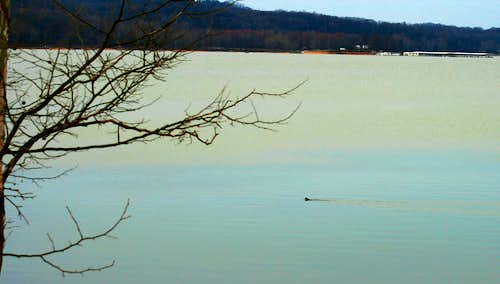 Monroe Lake, the Marina, and a Beaver

As you explore the Deam, it may not quite live up to your expectation of wilderness. Thanks to the road in the middle, there’s a large horse camp in the center of the wilderness area. It can be stuffed with horse trailers on a nice weekend. The horse traffic is a major part of the Deam experience, since the horses have eroded a lot of trails. There’s also a fair amount of horse sign on the trail, if you know what I mean.

On the north, the wilderness is bordered by Lake Monroe, brought to you by your friends at the U.S. Army Corps of Engineers. Though motorized travel is not allowed in the wilderness, it is allowed on Lake Monroe. This means that you can be enjoying a quiet camp in the wilderness when a power boat suddenly appears. Most of the boaters you’ll see close-up are fishing with a trolling motor, so they are not particularly loud or intrusive. But there is a marina just to the west of the Deam, and there is significant boat traffic on summer weekends.

While you’re enjoying that quiet lakeside campfire, you’ll also notice some large lakeside homes across from you. The suburbs of Bloomington extend to the north side of Lake Monroe, and the Deam is on the south. You may be in a wilderness but it’s not an isolated or remote one.

The Deam also has six cemeteries and some other historic buildings. None of these are particularly unusual in a protected area. In addition, there’s an active church on its western border, and a Boy Scout camp nearby. Since it’s so close to a growing city, don’t be surprised to see a lot of Scouts in the woods.

The Deam sees relatively high use. In 1993, there were an estimated 30,000 visitor days. That’s 2.3 per acre, or 82 persons per day, depending on how you want to look at it. Since there’s only three main trailheads, and if you ignore boat access, those 82 visitors average about 27 people entering at each trailhead each day. That varies by season, obviously, with a lot few on a winter weekday and a lot more on a summer weekend.

Probably because of its location and high use, people who visit the Deam seem to be a lot more tolerant of crowding and visitor impact than visitors in most other wildernesses. There’s a litter problem, and you don’t have to be a wilderness snob to notice that or care about it. You may have noticed from the tone of this section that I am a bit of a wilderness snob. But I do like horses, really I do . . . 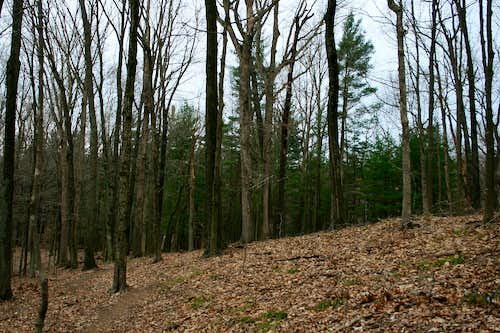 In the 1930s, what is now the Deam wilderness was about two-fifths closed canopy forest, one-fourth open forest, and one-third agricultural or formerly agriculture. This is not great farming country. Many hillside farms were tilled until the soil eroded and then abandoned - - sometimes called “ten-year land.”

These farms and farming practices became uneconomic in the Great Depression. The federal government purchased them under a couple of different recovery programs, and they became part of Hoosier National Forest. What is now the Deam once encompassed 81 farm sites, and it’s not hard to find traces of them. You’ll see signed of abandoned homesteads, gardens, and the occasional wagon road scattered here and there.

As another part of FDR’s recovery programs, the Civilian Conservation Corps arrived and went to work. They built some trails and the Hickory Ridge Fire Tower.
The CCC also built some ponds and planted stands of pines throughout the area on eroded fields and hillsides. Thanks to the CCC, one part of the Deam experience is coming across a stand of evenly-spaced pines in the middle of a hardwood forest.

Recovery of the land had progressed far enough in its first five decades then this could be designated a wilderness in 1982. The Deam is now the biggest wilderness in the lower Great Lakes region with almost 13,000 acres. For comparison, Illinois has eight wilderness areas but they’re mostly a few thousand acres each.

Nature in the Deam

Though the Deam is a partly artificial forest, it’s heartening to see natural processes reassert themselves. There are now a lot of snags providing places for cavity nesting birds. There are downed trees in much of the forest, returning their nutrients to the soil and giving smaller critters a place to hide.

I’ve seen, or seen signs of, many species. These include deer, raccoon, coyote, beaver, screech owl, and downy and red-bellied woodpeckers. The dog has found a lot of small rodents but hasn’t caught any yet. You’ll always see groups of turkey vultures circling above you. Nasties include ticks, chiggers, timber rattlesnakes, and copperheads.

While the forest was patchy in the 1930s, it’s now much less fragmented with fewer edges. Almost nine-tenths of the land is closed-canopy forest today, up from two-fifths in the 1930s.

Where it was clearcut, the recovering hardwood forest is often dominated by Tulip trees (Liriodendron tulipifera) and other early successional species. Sugar maple (Acer saccharum) are becoming the dominant later succession species, sometimes sped along by selective harvesting before the forest became a wilderness. The understories often look pretty healthy in these areas, even if the collection of tree species is less diverse than it should be.

The pine stands aren’t so healthy-looking. They’re even-aged, regularly planted, and lack both standing snags and downed deadwood. They’re less attractive to the wildlife species that dominate the Deam, and I don’t see much evidence of the natural processes going on outside the borders of these pine stands. A good wildfire probably wouldn’t hurt, but I haven’t seen evidence of any prescribed burns or natural fires left to burn.

Abandoned farms in lower bottomlands still show very disturbed plant communities. The former farm site at the tip of the Peninsula is still dominated by grasses, exotics, and disturbance species, for example.

So, nature in the Deam is a mixed bag but getting better. In another century I’m sure it will look better still. After looking at the destruction of other lands throughout the state, the Deam gives me hope.

The Deam Wilderness has 37 miles of trails, most of which fit into a large loop trail with some shorter, subsidiary loops (map here). The horse traffic tends to concentrate on the trails near the road and on the interior loop trails. Horseback travelers are much more likely to visit only for a day, while the typical backpacker spends two nights. Connecting the dots with those fun facts, then, you can reduce your chance of hanging with the horse crowd by using a more remote spur trail. Some trails in the northeastern part of the wilderness are reserved for hikers only.

Cutting cross-country will also get you away from the crowds. In our experience (in spring and fall only), ridge-top travel is easy while the bottom lands are pretty marshy with thick growth. You can also move around the lakeshore, but some shores are very steep. You’ll also likely want to ford some of the streams at their outlet, unless you like crossing the marshy bottomlands upstream instead. I’d plan on having a dry camp for the best off-trail experience. Alternatively, trek to one of the off-trail ponds that the CCC built and camp there.

The Forest Service has done a lot of low-grade rerouting of trails to allow areas of high impact to recover. Most of this involves moving traffic away from the wide, older trails onto a stretch of single-track trail that’s a couple of hundred yards in length. The Forest Service is very proud of Ruthie the mule, who drags a Vulcan hillside plough to make new trail and help maintain the old.

If you try to follow your progress on the map this rerouting can be annoying because you might be on the side of a ridge when the map shows you atop a ridge, or vice versa. But, if you’re on a trail, that doesn’t really matter since you only need to stay on the trail. If you’re off-trail, it also doesn’t really matter how the trails are routed. The rerouting that is not reflected on maps does make it harder to answer the kids’ question, “How much longer?” 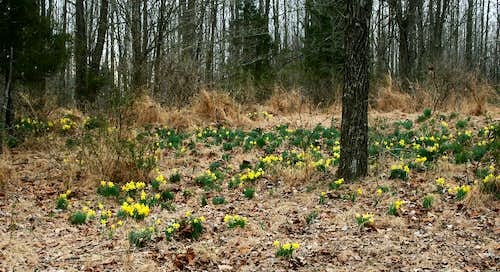 The best way to get to the Deam is from the north, through Bloomington. The city has serious traffic management problems, so allow some extra time for traffic. Go south on State Route 446 and look for the sign for the Charles C. Deam Wilderness (Tower Ridge Road).

You can also approach on State Route 446 from the south and west. Depending on how you do this, you may be going on some narrow roads through pretty rugged hill country. I wouldn’t try to come in from the southeast.

The Deam is a federally-designated wilderness, so no wheeled vehicles or motorized travel are allowed - - except on the road that runs through the middle of the wilderness, of course.

The Forest Service recommends Leave No Trace practices, and group size is limited to ten persons. Please follow other LNT practices when you visit this heavily-used wilderness.

Horse riders require a permit, which costs $5 a day or $35 a year. The revenue from these permits is supposed to help with trail maintenance because horse traffic has inflicted a lot of damage on the trails. Some of the old trails have been cut head-deep in the land as a result of (mostly) horse use.

If you’re within 100 yards of a trail, lake, pond or stream, you can only camp at a designated site. These are marked on the map that you can pick up at the trailhead. If you’re more than 100 yards away from these things, you can camp anywhere you like.

Hunting is allowed in season, so make sure you know when the seasons are. Most Indiana hunters are lazy, so you’ll mostly see them close to a road.