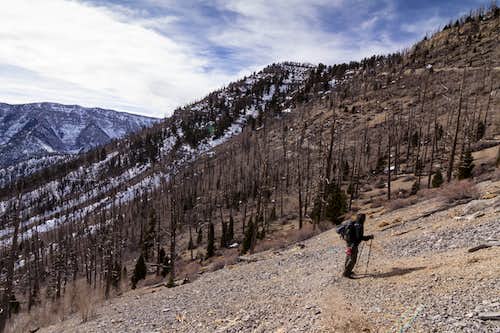 On January 11, 2014 my hiking partner Manny and I made a summit attempt on Charleston Peak via Trail Canyon and the North Loop Trail.
It's been an extremely mild winter here in the Southwest and we were expecting spring-like conditions in the Spring Mountains which is exactly what we found. We set out at 6:15 AM at Trail Canyon Trailhead (7,800 ft) and reached the North Loop Trail Junction (9,331 ft) about an hour later (2 mi/+1,531 ft). There were patches of ice along this section of trail that were still frozen as the sun rose behind us. It was all easily passible. 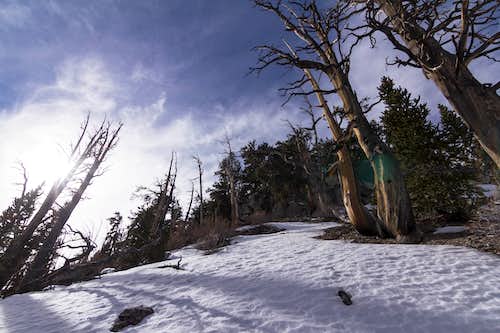 At the junction we went left (northwest) for .7 mi and took a short break at Cave Spring (9,600 ft). From there we hiked the long stretch (3.1 mi/+1,470 ft) to Devils Thumb (11,070 ft). I call this the long stretch because to me it always seems to be the most tedious part of the trail. It's only 3.1 mi but it feels much longer. Nonetheless the mountains reward perseverance - stunning views of Charleston Peak lay to the west and a bit of exposure to Kyle Canyon just below. We encountered many sections of ice, snow and/or slush along this section. Most of it had been post-holed by other hikers prior to us and it had seen a lot of freeze-thaw cycles thus making the path (mostly) easy and fast (for winter). The going was pretty straight forward but we did opt to throw on our spikes a couple of times just to make movement a little quicker. We also heard rockfall at least three times in this area. The mountains were definitely alive on this day. At one point just before the Thumb we heard a fairly loud bit of rock fall across the trail about a quarter mile back from the cliffs above. 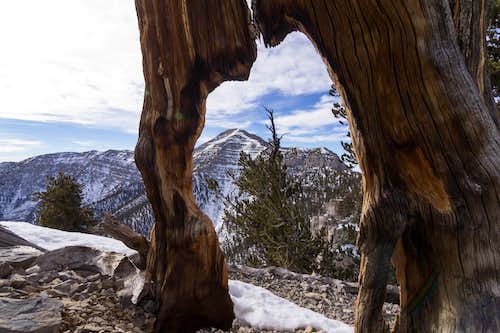 Past Devils Thumb things changed quickly. We soon found our selves post-holing through shin deep snow that seemed to be untouched. I told Manny to hold back while I slowly trudged ahead to inspect the route. I made it to the end of the first snow section about 200 yards ahead and looked around the bend. It looked to be more of the same - at least until we reached the north face of the summit itself, where the snow might still be frozen enough to support us. The route looked to be about half covered with snow on the last mile of the summit. I checked the time - 11:00 AM. In the summer we could do the last 2.2mi/+848ft in under an hour easily. But in these conditions I estimated it to be a minimum of 2 hours. There was no guarantee that the snow would be hard enough along the north face as it was a very warm day. We were also lacking ice axes even if the terrain proved favorable. I knew I didn't want to post-hole all the way up the summit and neither did Manny. We have both stood on top of Charleston Peak before and we live an hour a way from these mountains in Las Vegas. Our turn around time was 11:30 AM (Due to work). After factoring all of these variables I asked Manny if he was good. He was. 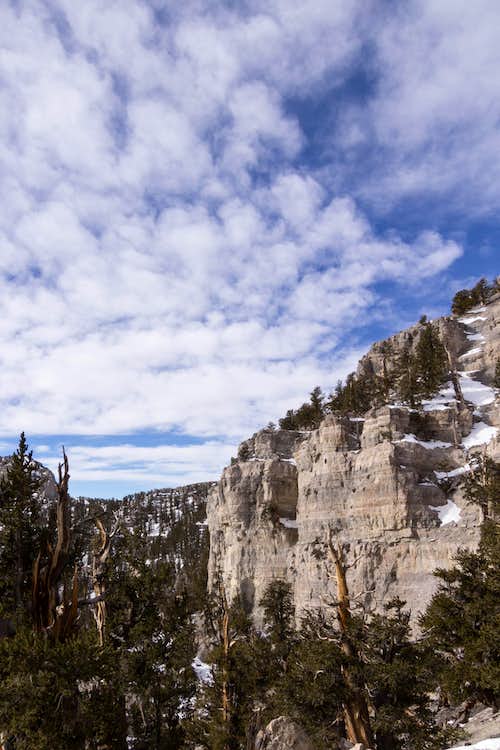 We turned back and hiked to a spot where the trail traverses a saddle approximately 1/2 mi north of Devils Thumb. I was anxious to get out from under the cliffs after hearing the rock fall earlier. The saddle sits in a nice safe spot (as long as there's no wind) at 10,900 ft. There we ate lunch with views of McFarland Peak, Bonanza Peak and much of the Spring Mountain range to the north - Kyle Canyon, Frenchman Mountain, Lake Mead and everything beyond to the southeast.
We were back to the truck by 2:30 PM and back in Vegas just past 3:00 PM.
I believe the best way to summit in these conditions would be to arrive at Devils Thumb in the early morning. The snow should still be hard enough at this time to support weight. I would definitely bring an ice axe and possibly crampons though I do think micro-spikes would be sufficient. One option would be to backpack to the saddle we ate lunch at and summit the following morning from there. Of course this would depend on weather. If it's windy it wouldn't be a fun night on the saddle. Another more direct option would be to get an alpine start from the Lee Canyon side and follow the gully near the ski resort up and over to the North Loop Trail. However I would be very mindful of rockfall inside of the gully in these conditions.
-Jon Ullon 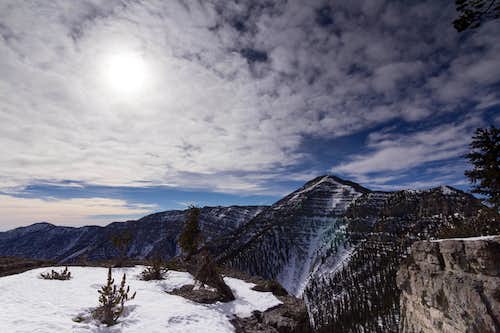