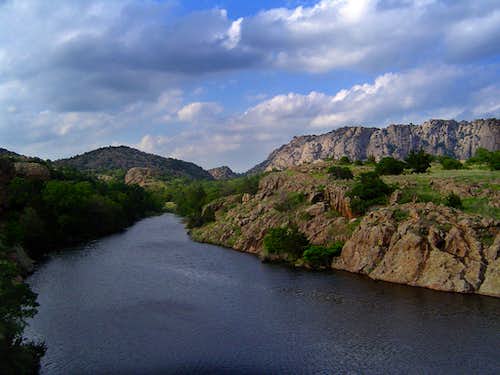 Elk Mountain from the southern end of the Charon's Garden Trail

The Charon’s Garden Trail is one of two maintained trails in the Wichita Mountain’s Charon’s Garden Wilderness. The trail provides quick access into the heart of this wild corner of the finest mountains in Oklahoma. With two trailheads located at the northern and southern end of the area, the trail is a great hiking trip in and of itself but is also a useful route by which to access other, remoter corners of the Charon’s Garden region.

A major spur that skirts the southern wall of Elk Mountain leads to Mount Lincoln and the other peaks associated with it. Although no official trails branch off to the west, easily followed drainages lead into the heart of wilderness area and permit access to Granite Mountain and Twin Rocks Mountain, two of the 2,000k+ peaks in the Charon’s Garden area.

In addition, the trail is often the means by which climbers reach Elk Mountain’s popular southern wall, home to numerous climbing routes. No matter what leads one to hike the Charon’s Garden Trail, the scenery is its greatest dividend.

From the trailhead at the Sunset Picnic Area, the route crosses a bridge over a small, shallow lake. On the far side of the bridge the trail splits. To the left is the Elk Mountain Trail, which leads to the large summit plateau of Elk Mountain, which looms to the south. To follow the Charon’s Garden Trail, remain to the right, continuing west. After 0.35 miles the trail splits again. By staying to the right and crossing a wide, usually dry drainage, one continues on the use trail that leads to the backpack camping area, the Crab Eyes, Sunset Peak and the infrequently traveled western stretch of the Charon’s Garden Wilderness.

Staying to the left on the main path, the trail makes a wide arc to the south, skirting an outlier of Elk Mountain, which has not left one’s view despite its changing appearance. Ahead one can see the massive Apple and Pear, a pair of enormous rocks on the flanks of Elk Mountain. They are so-named because of their amazing resemblance to their namesake fruit. 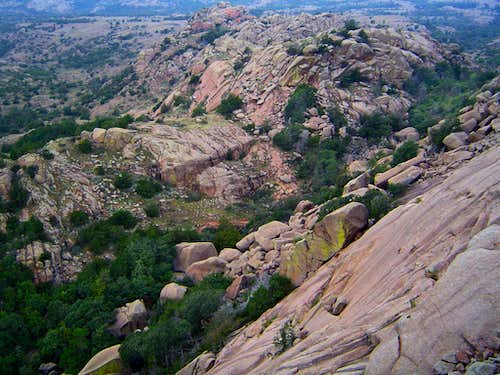 The Valley of Boulders

Soon the trail reaches the threshold of the Valley of Boulders. The canyon formed between the west wall of Elk Mountain and the rest of rugged, rocky terrain of the western half of the Charon’s Garden Wilderness. As its name indicates, the canyon is filled with enormous granite boulders. At this point the official trail temporarily disappears.

If one wants to avoid the boulders, a rough, narrow use trail skirts the west side of the canyon. However, scrambling over the boulders is one of the best parts of the Charon’s Garden Trail and it would be a shame to miss the opportunity to experience one of the trail’s signature sections.

In addition to the unlimited route-finding permutations, another great feature of the Valley of the Boulders is the cavernous rooms that have been created in the spaces between some of the larger rocks in the canyon.

This area is especially interesting in winter when runoff funnels through the canyon, underneath the boulders. You can see the sizable creeks flowing into these large rooms and then disappearing into the rocks again. At the southern end of the Valley of the Boulders, it is possible to scramble up the western wall of the canyon to a large granite slab that is popularly used for toproping. 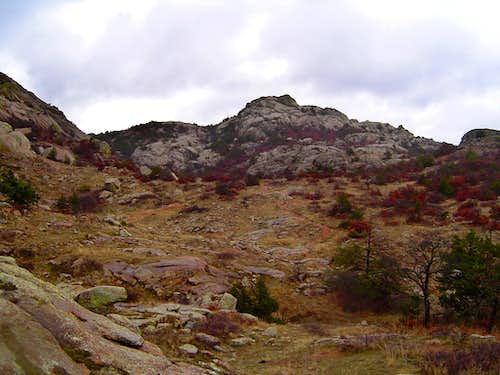 Beyond the Valley of the Boulders, the trail comes into a large valley. Elk Mountain, Mount Lincoln and the increasingly rugged terrain of the western half of the wilderness area form the walls of the valley. The attractive valley is blanketed in lush green grass and wildflowers in spring and is warm gold in fall and winter. Once entering the valley, the trail splits again.

Be sure to angle away from Elk Mountain, which lies to the north. Once one begins climbing out of the valley, the route up Mount Lincoln can take a number of different paths. The primary concern is skirting the pair of massive boulders that obscure the actual summit from view. It is easier to stay north of the two boulders and to climb Mount Lincoln from the northern side. From the summit, one can continue to three additional peaks: Bat Cave Mountain, Bat Cave Peak, and Phantom Mountain. 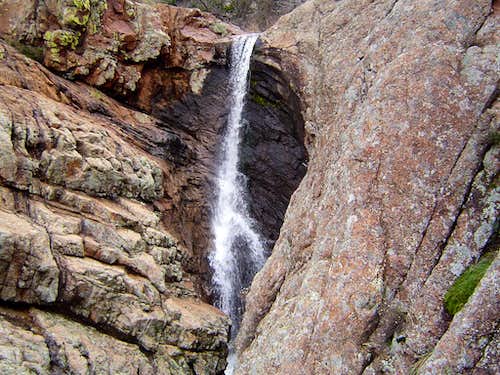 Back on the main trail, the route leaves the aforementioned valley and passes into an increasingly narrow canyon. Even in the drier months water may be trickling alongside the trail. This is because the grassy areas and the earth beneath the Valley of the Boulders holds water after the rains have subsided and the canyon the trail now passes through drains these small but important sources of water.

At the southern end of the canyon is Little Post Oak Falls, which not especially impressive but during winter can have a substantial flow going over its 5-6 foot drop. The trail crosses over the lip of the falls and skirts the rocky edge of the pool.

Shortly after the Little Post Oak Falls, the trail crosses a small creek coming in from the east. Following this small creek a short distance leads to Post Oak Falls, the only substantial waterfall in the Wichita Mountains. Although the falls are often reduced to a trickle, the falls form an impressive 40-foot plunge in winter and spring. By climbing the left side of the falls it is possible to reach the top of the falls and climb Mount Lincoln via the peaks southern flank. 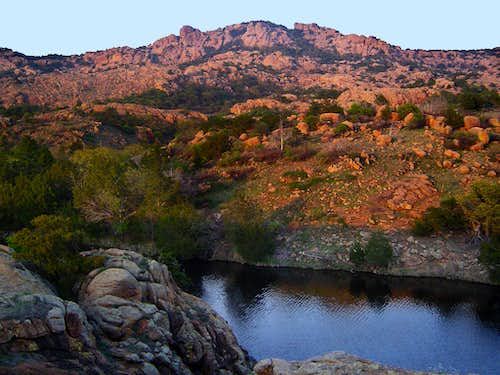 Continuing on the Charon’s Garden Trail, the route proceeds south from the falls area and skirts the edge of a granite mound, leading the trail to its southern terminus at Treasure Lake.

By going off-trail and following the base of the mound to the west leads one to another, unnamed drainage coming off of Twin Rock Mountain. Following this drainage to the west is one of the best ways to access the rugged interior of the Charon’s Garden Wilderness. The drainage also leads to small but attractive Post Oak Lake, which is parallel to nearby Treasure Lake.

At the latter body of water, the main trail comes to an end. It is possible to leave a car shuttle here, but it is much more enjoyable to simply turn around and return the way one came. For a longer, more exciting day, consider traveling up the drainage to Twin Rocks Mountain and the Crab Eyes, or by heading back to Post Oak Falls and climbing Mount Lincoln, then traversing up Elk Mountain and descending that peaks trail back to the Sunset Picnic Area. 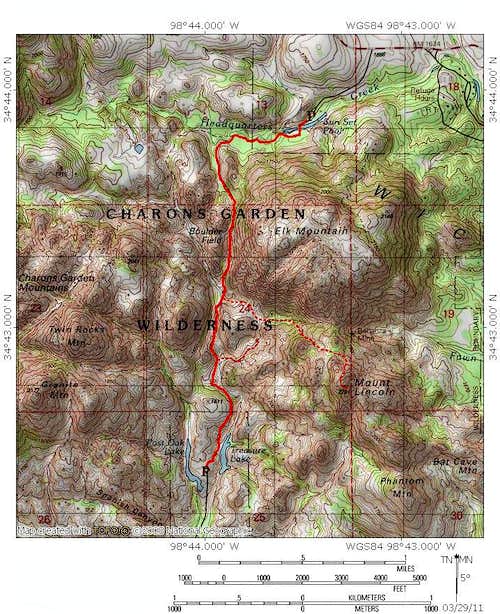