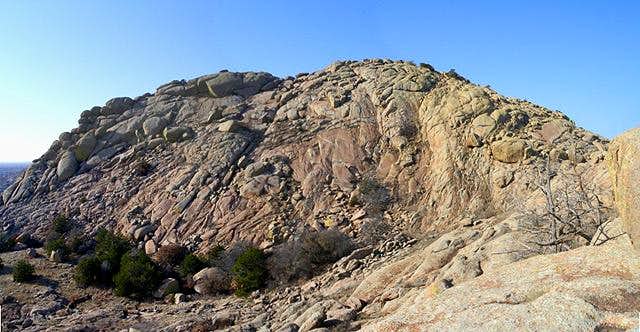 Isolated in the far western reaches of Charons Garden Wilderness, which is itself a remote portion of the Wichita Mountains National Wildlife Refuge, “Charons Garden Mountain” is an officially unnamed mountain reaching approximately 1,905 feet. It is less than distinct from the summits of nearby peaks, and there are a number of unnamed summits to the west that are higher. It would be an easy mountain to completely miss, and despite conscious effort I was unable to see distinctly where it left off and more distant mountains began from the summit of Granite Mountain, however when one arrives at its foot it takes on a new dimension of ruggedness and grandeur.

In Greek mythology, Charon was a son of Erebus who ferried the souls of the dead across the River Acheron, or River of Woe, however a common misconception is that he ferried them across the River Styx, or River of Hate. This misconception has apparently found its way into the name of Charons Garden Wilderness, as Styx Canyon seperates Charons Garden Mountain from Granite Mountain. On a broader scale, Charons Garden is the name given to the wilderness area because it apparently resembles the stark, barren landscape of the land which Charon inhabited.

Despite its proximity to some roads and buildings, the approach remains quite long, and Charons Garden Mountain is the epitome of isolation. It is very rarely climbed, and I can almost guarantee you that you will not see another person once you get away from the seething crowds of Granite Mountain. Composed of the excellent granite characteristic of the Wichitas, a plethora of third and fourth class routes await the casual scrambler, and enormous slabs of virgin rock await the more serious. Perhaps the most appealing attribute of this mountain is its elusive nature—it truly is hardly even identifiable until you’re standing directly beneath it, and then it is monolithic, rewarding the climber for his extended approach with terrific views. 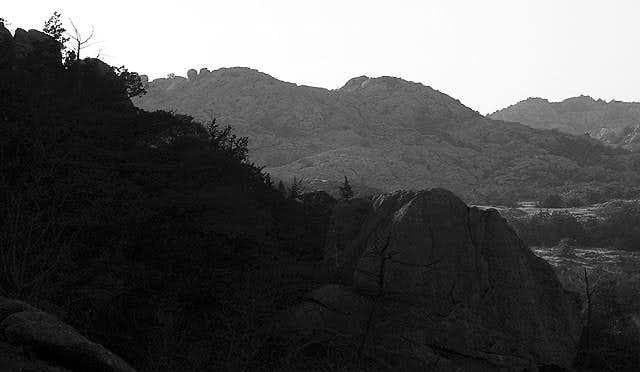 The Wichita Mountains Wildlife Refuge lies about 25 miles west of Lawton, Oklahoma. From Interstate 44, take the Medicine Park exit 45 and drive west on highway 49 about 10 miles to the refuge gate. Continue along highway 49 just past the visitor center, then take a right and continue along the highway a few miles until you reach a road that goes left towards the park headquarters. Continue on past the headquarters for about 3 miles. The road makes a 90 degree turn west and after about 1 mile, make a right turn at the sign leading to the south entrance to the Charons Garden Wilderness. The trailhead starts at the parking lot. The route from the parking lot to the base of the mountain will be covered in the route pages appearing on the left sidebar. 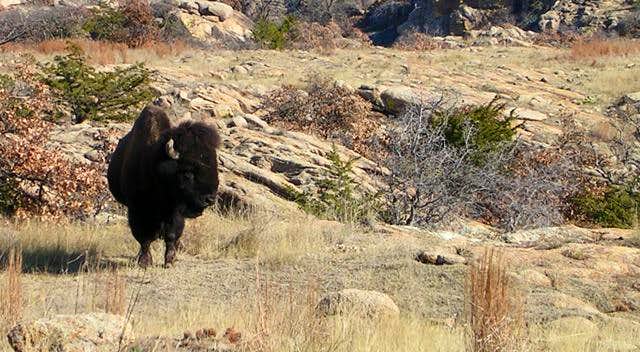 Permits are issued for stays up to 3 days long. Campfires and other open fires are prohibited, and backpacking stoves are to be used with caution. Contact information can be found below. A two-dollar per person administrative fee will be charged. No more than 10 people will be issued a permit in a given 3 day period. 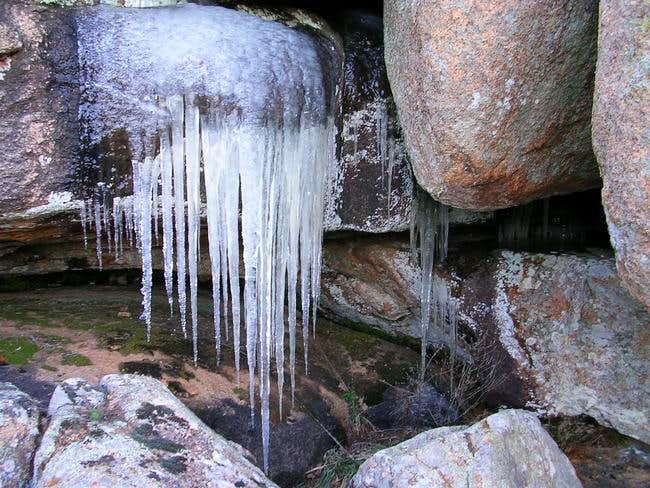 An ice formation in Twin Rocks Canyon seen during the descent.
January 17, 2005

Late fall to early spring is probably the best time to climb Charons Garden Mountain as summers can be extremely hot. Winters in Oklahoma can be very harsh, but there are also many warm days as well. I have encountered temperatures in the Wichitas reaching into the seventies late in December, and can easily exceed 100 degrees in the summer, although this is not to say that it is unclimbable during the warmer months. Also, this mountain is susceptible to overgrowth in places, and you will have much less brush to deal with during the colder parts of the year.

Special thanks to attm for much of the information contained on this page.