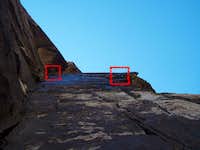 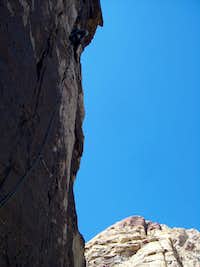 Randy Marsh and Pier Locatelli established and published the line in 1990. It can be a life saver to a party who might have hiked all the way back to Dark Shadows Wall to climb Dark Shadows itself only to find a crowd waiting for the route. Since they both go at the same grade, and few leaders at that grade would consider climbing Chasing Shadows due to the exposure over the roof, it is normally wide open. There is a bolted version to the finish called Edge Dressing (5.10b) which runs straight up without the roof traverse to the Dark Shadows anchor. But of course if there is somebody already at the Dark Shadows anchor or climbing its final pitch, that would be missing the point of climbing this route as an alternative.

Park at the Pine Creek trailhead off of the Red Rocks loop road. Hike down the trail along the creek, past the old homestead and into the wash as it heads for Mescalito. Continue deep into the right fork of Pine Creek Canyon. This is a lush area with quite a bit of vegetation overshadowing a flowering creek. There is a trail that skirts the canyon floor on the right. Eventually you come to the Dark Shadows wall on the left with a large boulder perched over running water. Start as you would for Dark Shadows.

1st and 2nd Pitches- 150’- 5.6/ I don’t know anyone who splits these first two pitches. Clip two bolts up the easy face climbing above the creek to the base of the corner and a fixed station. I personally run it out from here because I don’t want the rope drag. But if you are going to protect the corner, I advise using a double length runner on all your placements. At the top of the corner, make an easy traverse left to the ledge and fixed station.

3rd Pitch- 70’- 5.8+/ From the belay, traverse up and right to the deeper crack. Place larger gear as you ascend the pure vertical terrain. This rock is not as bomber as the crack on the fourth pitch of Dark Shadows, but there are no real crux moves for the grade, just steep. You will come to a fixed station below the roof.

4th Pitch- 130’- 5.8+/ A very exposed pitch for the grade and quite run out towards the end as well. Run up several bolts trending left using double rope technique or double length runners to avoid rope drag later. Once above the roof on its left, make a sharp traverse right following the bolt line directly above the roof. Several of these bolts are too close together and it would be wise to back clip anything you can to again help with rope drag. The crux move is on a very blank portion of the face right below some featured terrain. It requires a balance stand up move on one thin foot hold until your fingers can catch an edge. This hard move (for the grade) is several meters above your last bolt. Continue up run-out terrain, moving right when in doubt of the rock quality to access easier climbing to the fixed belay above. The belay is several meters to the right of Dark Shadows' fourth pitch station.

One long double rope rappel gets you back to the top of the first combined pitch. You can also rappel straight down to some rap rings on the wall versus taking this angle if that station is busy. One more double rope rappel will land you on the boulder below, but of course you will get the ends of ropes wet unless you spend a lot of time on extra rope management at this point.

Double 60m Ropes. Single gear to 4”. Dozen shoulder length slings. I would not clip any of the bolts with draws on this route, none of it is that straight. The wall sees no sun and can be cold in the spring, fall and winter. A jacket would be advisable even though it is a short route.