Sometimes finding a way to a mountain in Nevada is like chasing a shadow. It just seems futile when the mountain you are after is so far out in the "boonies"  and is seldom visited by anyone that hardly any information exists. Stewart Benchmark Peak is one of those "shadows" since there just isn't really any information on it anywhere.
It is  the 73rd most prominent peak in the state with almost 2900 feet of prominence. That alone makes it a worthy goal for those who are chasing  the prominence peaks.  The most information was on peakbagger and Dennis Poulin had visited it but he encouraged the reader to do the necessary mapping research as he just couldn't take responsibility for helping you get lost in the absolute middle of nowhere. To quote Dennis: " Rather than detail the directions, I prefer that anyone following my route should do the proper research to get to the trailhead. This is a very remote area of Nevada and unless you have a dependable vehicle with high clearance, 4WD, good tires, and lots of gas you may become stranded for a very long time. I was the 12th person to sign the register since it was placed in 1999. The first since 2009."  He had visited this one in July of 2012 so it was 3 years of loneliness for the summit of this one.

Thanks to Dennis's comments, we knew we had to be prepared so study the maps and topos we did. Both Ken Jones and I were determined to get to the top of this one so we did our "homework".   Now onto my "story"......

I met  Ken in Fields Oregon about 5 PM on Monday the 9th of June where we filled our gas tanks since it would be the last place where we could get gas until we reached Gerlach Nevada, as there are no places that sell gas in this remote area of Nevada. Fields also sells hamburgers and milk shakes but you need to be there before they close at 4:30.  Gas is available a bit later but how much later I'm not sure.


The reason for meeting at Fields is that the gas that used to be available at Denio Nevada  no longer exists since that source is currently not selling gas due to dealing with digging up its storage tanks and replacing them, something that may not ever take place. A phone call would be smart but I wouldn't count on gas at Denio anymore.  Fields is almost 30 miles north but we didn't want to take a chance since we would be spending alot of time on remote dirt roads so Fields was where we met.  I had climbed Tobin and Tholen peaks on Saturday and Sunday and I had taken a rest day by only going to the top of Winnemucca Mountain earlier in the day (a drive up) prior to making the long drive to Fields to wait for Ken who was coming from Seattle.

We used Benchmark and topos  to help us and this is a rough idea of what roads we used. I made waypoints that I hoped would help and Ken had also done a similar effort.  We found our way down highway 140 after leaving Denio to a turnoff for the Loomis Creek (Ranch) road. That road heads south and is a high quality dirt road for most of the way as it heads south, passing through the Loomis Ranch along the way. About 3 miles south of the ranch, the road comes to a T and we went right and followed the road as it made its way toward Santa Claus spring, where we had our first sign to show us that we were on the right track. Before Santa Claus Spring, we did see one sign indicating that the Sheldon Wildlife area was on the right side of the road. 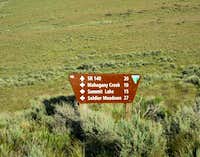 At the spot where we found the sign, we took a road that headed directly south while the road we had come in on continued on towards Summit Lake. Note the mileages shown on the sign as a help to you in plotting your own route if you pursue the shadow we were after. The road south became rougher and when we came to a fork, we went left and followed that track until it eventually ran into another road, also signed with an indication that to go right would take us toward Summit Lake in 6 miles. The mountain was visible in the distance and now we just had to find the correct connector roads to get to the spot that Dennis mentioned in his report. Since we didn't want to go to Summit Lake just yet we went left, following the sign indicating the Bartlett Ranch a number of miles away to the east. As we went along this rough road, we eventually dropped down a hill to what is noted as Horseshoe Bend on the topo to a shallow stream crossing and noted a sign indicating the Lahotan Trout area just beyond a cattle grate. Our turn off was near this sign and not far from that cattle grate where we went to the right on a rougher yet road that hit a gate in about a 1/10th of a mile. From there we kept on toward the mountain we were pursuing and found a good spot to car camp about a mile or so from hill 8288 which would serve as our trailhead the next day.

By the time we had reached where we car camped for the night, we had passed zero other vehicles, coming or going.  Distance from Denio to that point,  50 miles give or take a few miles or two.  I never did zero my odometer, I just drove from waypoint to waypoint that I had set up or followed Ken as he drove from his waypoint to waypoint.

After a good nights sleep, we both jumped in Kens 4 Runner, leaving mine to "rest" where we had car camped and Ken drove across a valley on  the way to our "trailhead" atop Hill 8288. Most sane people would have parked at the base of this hill but Ken skillfully drove his 4 Runner right up to the very top, passing a remnant of the past near the top.   The hulk of an older truck sat as a reminder that sometimes a truck can drive into this kind of country but due to mechanical problems, doesn't always make it back out.

The simple hike to the top

The crux of the mountain was in the getting to it. Thanks to our map work, thanks to Dennis's comments and thanks to our vehicles, we did just fine.
I'm not going to insert a "route" trip in this report since the hike to the summit is the easiest part. It is less than a mile and under 700 feet. Once on the summit, you will see a benchmark and a register plus some outstanding views. Just to the southwest and not very far are more rocky spots that could vie for the highest point on this mountain so I would suggest that any other climber just go on over and touch those other spots to make sure you really got the highest place on the mountain.


Before we headed back to the vehicle, we elected to hike over to the highest spot of the North Black Rock Range Wilderness study area for good measure and to get a bit more of a workout. When we arrived at the high spot of the WSA, we did not find a cairn or a register. It is a trivial effort so we didn't celebrate our achievement, we simply clicked a couple pictures and made our way back to the vehicle, scaring up a couple deer that had been resting on our chosen path.


Now, the trick was to find our way to Summit Lake and then Soldier Meadows Ranch, where we hoped to find lunch and information about Big Mountain, our next objective. 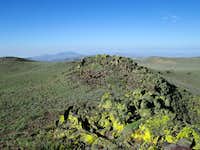 Next: Big Mountain and the Soldier Meadows Ranch

When we got through with Stewart and found our way back to the signs that indicated that Summit Lake was 6 miles away, I knew we'd be having our lunch at the Soldier Meadows Ranch. To whet your interest a bit,
here are a few links:
Link One: History
Link Two: General Information
Link Three: A trip report

This is on my personal list of NW Nevada P2K's, I've spent a lot of time looking at this in my Topo software and I'll definitely reference this when the time comes. I'm impressed you went on over the mountain range to pick off Big Mountain, that's a pretty cool area and the roads really aren't too bad except its just soooo much gravel.

Caleb, it is a cool area, remote but beautiful. After we did Big, we went on to do Granite (Gerlach), then Donnelly (thanks to your fine page) and finally Pah Rum. We had a great time out there and enjoyed the area. Amazing to think about the pioneers that had to push through that area to get to either California or Oregon.