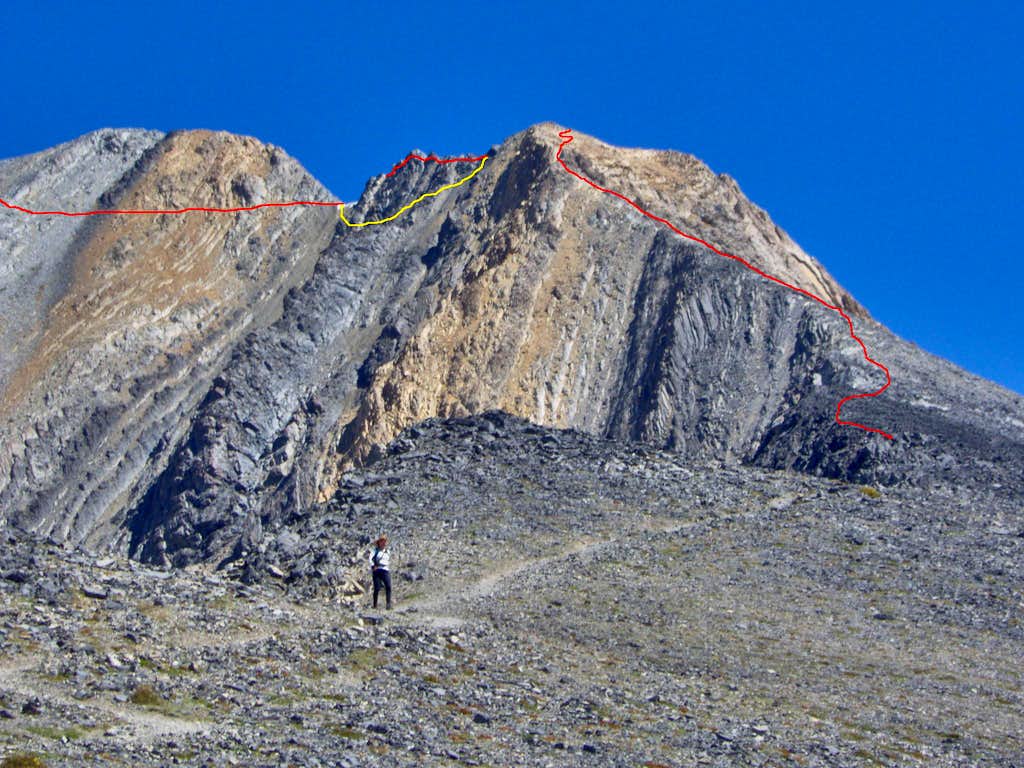 Chicken-Out-Ridge in August showing the two most used summer routes. The red line follows the knifed edged ridge top through the black (or grey band) which is mostly solid rock with numerous handholds and footholds the entire way. The yellow line shows what I call the "grungy traverse" that some people use to avoid the exposure on the ridge. This lower route is subject to rockfall and if snow covered can be quite dangerous. In the summer of 2016 several parties got into trouble using this "shortcut" resulting in injuries and rescue operations. The standard route climbs the ever steepening ridge to a V-notch that narrowly avoids the steeper rock on the north side of the ridge and then crosses the tan band on the south side of the ridge (make sure to note the location of this notch for your descent). From the notch, climb directly up the ridge to gain the crest or traverse the south side of the ridge until you reach the black band. Stay true to the ridge top until you reach the short, steep downclimb to the small saddle that splits the ridge. Getting across this saddle often includes a short, but level snow crossing that usually doesn't require the use of an ice axe by mid-summer. Traverse the northwest face staying below the false summit to a large saddle from where there are a number of routes to the summit. The yellow line is sometimes used as an alternative to the ridge top but it is not recommended. This lower crossing is loose, subject to rockfall from above and has been the cause of several rescues on the mountain dues to accidents. It is possible to avoid Chicken-Out-Ridge by using the steep gullies to the south but this involves 4th class climbing on very loose rock. We were forced to use this way of descent once to avoid lightning on the ridge but I would not recommend it otherwise.
« PREV NEXT »