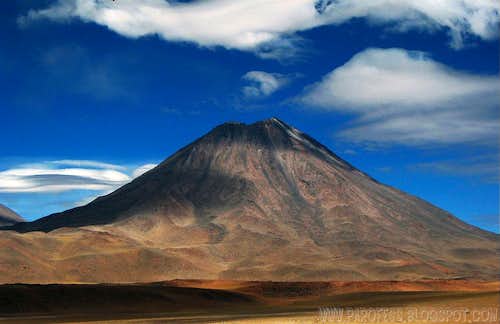 Chiliques volcano, I took that shot back in 2007.
I have looked that volcano twice already, and probably i'll look again some day. It is a perfect volcano close to Laguna Lejia and another great volcanoes such as Lascar, Pili, Aguas Calientes, Miscanti, Miñiques, Coronado and dozens more!

The most recent activity in its vicinity may have been the eruption which formed the Cerro Overo maar, 8 km to the north. Chiliques has a 500 m diameter circular summit crater and several young flank lava flows. The largest of these, is found on the northwest flank of the volcano extending for about 5 km from the summit. Lava flows belonging to two older phases of activity from the ancestral Chiliques are also present. These older flows are more extensive than those from the present volcano and extend for up to 10 km from the present summit. The most extensive of these is found to the north of the volcano and is a flat, tabular, blocky flow. Chiliques occupies an interesting position at the intersection of two of the major volcano-tectonic lineaments in this region: the major N-S trending Upper Miocene to Recent 'Miscanti Lineament' which forms the western margin of the uplifted puna block, and the NW-SE trending Cordon Puntas Negras lineament which is manifested by the eponymous volcanic complex. Although it is likely that Chiliques is part of the Cordon Puntas Negras system, unlike most of the centers of the system, it is a major center with a history as long as the system itself.

The Chiliques volcano, which sits in northern Chile and hasn’t erupted in at least 10000 years is now showing signs of life. Images made by Advanced Spaceborne Thermal Emission and Reflection Radiometer (ASTER) showed the volcano in visible and near-infrared light and thermal infrared. Hot spots can be seen in the thermal infrared image. They are caused by magma just under the surface of the volcano. Geologists had previously considered Chiliques, a simple 5.778 m (18.957 ft) stratovolcano with a 500 m (1.640 ft) diameter circular summit crater, to be dormant. However, at January 6, 2002, nighttime thermal infrared image from ASTER revealed a hot spot in the summit crater as well as several others along the upper flanks of the volcano’s edifice, indicating new volcanic activity. Examination of an earlier nighttime thermal infrared image from May 24, 2000, showed no such hot spots.

Stratovolcanoes such as Chiliques account for approximately 60 percent of Earth’s volcanoes. They are marked by eruptions with cooler, stickier types of lava such as andesite, dacite, and rhyolite. Because these types of lava tend to plug up volcanic plumbing, gas pressures can more easily build up to high levels, often resulting in explosive eruptions. The material spewed forth during the eruptions consists roughly of an equal mixture of lava and fragmented rock, so these volcanoes are also commonly known as composite volcanoes. Mount Saint Helens is a good example of stratovolcano.

To get there is easy, You have to get to San pedro de Atacama - Chile. Once you get to the city, just look for a transport and if you don't feel like going up alone (there's no visible trail to follow so normaly people go on guided expeditions, but of course, you can go by yourself but i would not recommend!) i suggest you to hire a guide. There's plenty of them at the city. The climb cost is around CH$ 150.000,00 (about US$ 300.00) and it is a two days only climb! That's why the altitude is dangerous, there is always a chance of altitude sickness. The altitude difference between the summit and the city is huge: 3.500m.

This volcano is one of the hard ones there. The reason is obvious, no beat up trails what so ever and volcanic sand all the time, which means 2 steps ahead, 1 behind.

Some photos of the route I planed based on local info: 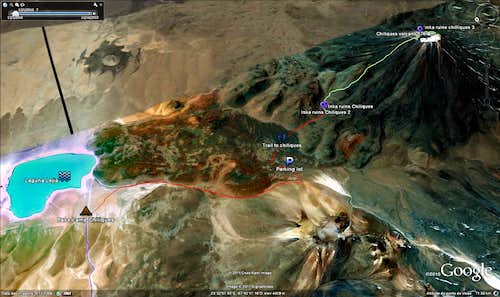 All the route here. 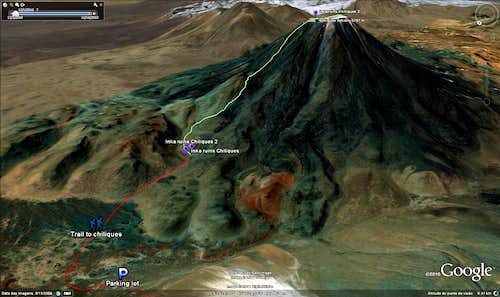 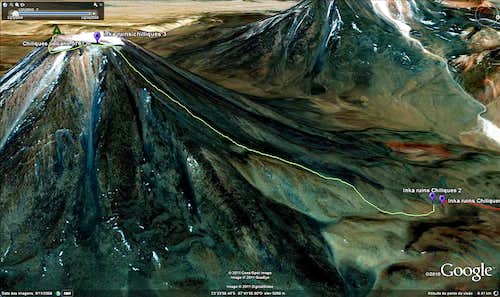 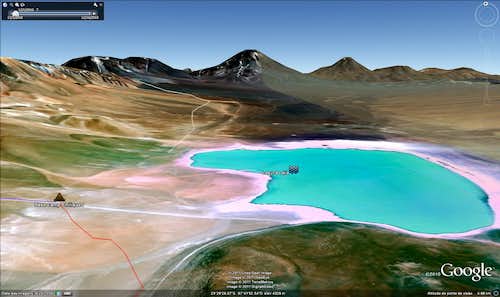 Laguna Lejia and other volcanoes like Lascar, Simbad and Pili. 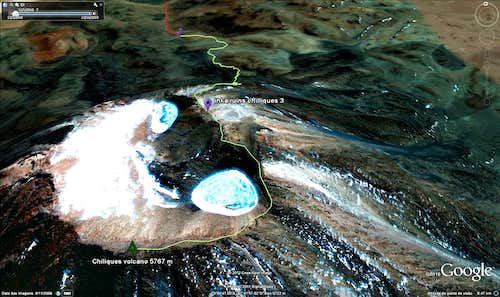 A close up at the crater and summit.


It is a volcano with the traditional cone shape, so it is pretty much a walk straight up from any direction, that route is the normal route i got info, but as i just said, it's possible to climb from any side.

No red tapes at all, just respect nature, wildlife, take with you all the garbage and whatch out for possible dangerous volcanic activity coming from Lascar, since it is the most active volcano at northern Chile. For the ride up there i can point a very experienced guide, Christian from Vulcano expeditions at San Pedro de Atacama, a friend of mine.

No fees at all. 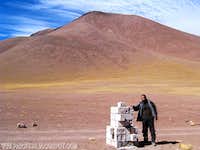 Tropic of Capricorn marking close to Laguna Lejia. Close to Lascar, Chiliques and Coronado volcanoes.
Anywhere you want. The water of Laguna Lejia is too salty, not good for drink or cook, take all the water you'll need with you, for two days at least 10 l! Staying at Laguna Lejia can be very cold, so be prepared for that and get the camera ready, if you're lucky, you'll see a desert animal, a big one that looks like an ostrich, this animal is called a Ñandú. Very difficult to see and even harder to photograph.

Be my guest, i marked the summit involved, camping spot and the trail. Approach by car from San Pedro de Atacama, approach to the base and Inka ruins.

LINK ALSO AVAILABLE AT THE TOP OF THE PAGE at "GPX FILE". 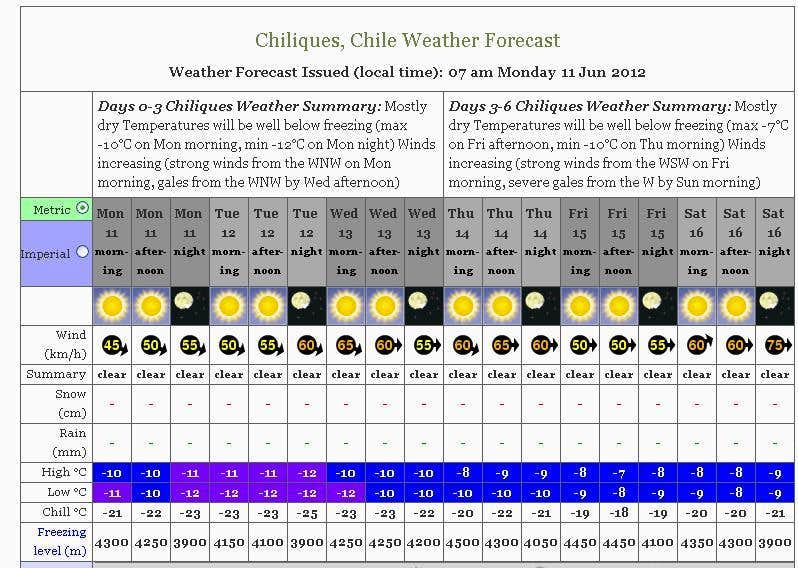