Mostly known as a mecca for single-pitch sport climbs, the Calico Hills do offer a fair amount of trad if you want it, though, to the best of my knowledge, the routes go at two pitches and around 300' max.
At 5.3, Chips and Salsa is not pushing any climber's limits, but it's nice to do just for fun, to practice placing gear, or for new leaders to learn the game. It has two pitches, with the first being by far the better and more enjoyable, and ascends about 250'.
Up top, there are really nice views, and you enjoy them away from the crowds, though not the noise, on the trails below.

From SR 159 west of Summerlin, turn onto the one-way Scenic Drive of Red Rock Canyon National Conservation area. Drive about a mile to the First Pullout. There is ample parking, but this lot can fill up quickly. It often has a jammed, circus-like atmosphere in the afternoons.
Hike down into the wash below, taking the left trail fork as you go. In the wash, go left. A side canyon on the right appears shortly. Go into it and then scramble up boulders and gullies (Class 3-4) until you reach the base of the wall. If you located the crag before hitting the trail, you should have no trouble actually finding it. Give yourself 10-15 minutes for the approach. 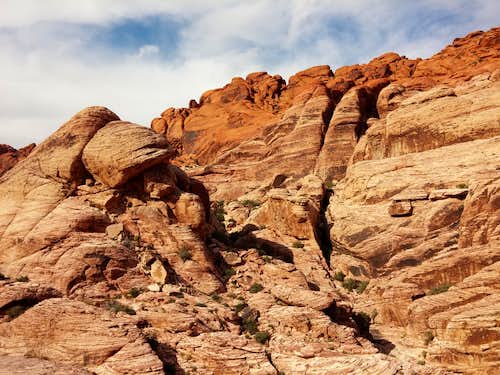 Tuna and Chips Wall-- look for the big cleft

The first pitch follows the huge cleft that splits the wall, and the second is mostly through a huge chimney before finishing on a face to reach the top of the wall. First pitch
Pitch 1-- About 100'. Easy but fun, takes plenty of passive pro and cams up to the equivalent of a #3 C4. There are two bolted anchors at the top of the pitch and plenty of room for both the leader and second to stand.

Anchor Above First Pitch of Chips and Salsa
Pitch 2-- About 150'. Very easy (mostly a scramble). Not a lot of good opportunities for protection, though I was able to get a really good stopper placement in almost right away to protect against a potential Factor 2 fall on the anchor. After that, placements were scattered and so-so, but they never really felt necessary until I got out on the face. I have read that if one climbs the face to the right of the chimney instead, it is more like 5.7, but I thought it looked easier than that though run out. Also, I read an entry on MP by a guy stating he had installed bolted anchors at the top of this pitch in 2008, but I did not see them, meaning either they are gone or that I did not finish out where he did. Where I topped out, there was a cairn and I was able to build a marginal gear anchor using a crack and some stoppers. Although the second pitch is very easy, communication with the second is difficult because you lose sight of each other, people in the vicinity make a lot of noise, and wind is often an issue. Work out a communication system before you start climbing. Note that there is usually no cell service here. It wouldn't surprise me if some climbers are texting while climbing these days, but they ought to know that won't work here.
To descend, scramble climber's right to a gully and then hike/scramble back to the base.

Because the rock tends to be pretty soft, an all-passive lead is recommended. However, the route does take cams; I placed a #3 C4 early on the first pitch.
Here is the rack I had, and I had more than enough of the right pieces for each pitch: