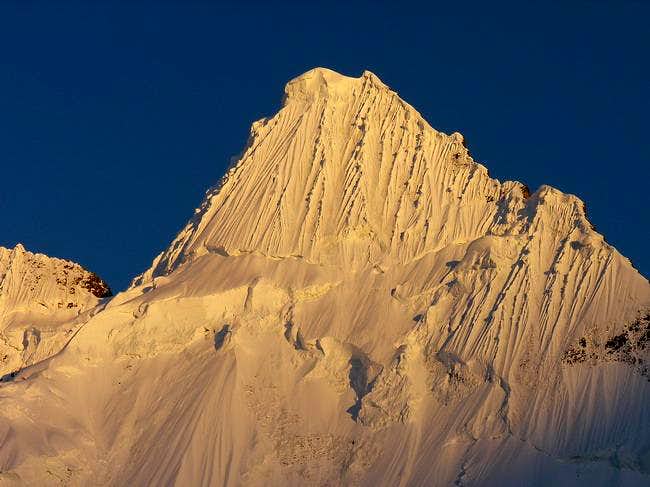 wonderful pic of an intimidating mountain

That must be where Hermann Buhl fell

I don't exaclty know where it appened, but... the picture abowe show a mountain that belongs to Chogolisa group, but it is not the Chogolisa "summit". It's just near, behind that mountain. I hope to make some Chogosisa pictures.

Hmmm, I think this is one of the Vigne Peaks, possibly "Vigne 6716". Not sure, just a guess. It's not Chogolisa I which is where Buhl died if I remember correctly.

I saw Diemberger give a lecture on Broad Peak earlier this year. He had the last photos taken of Buhl, of course, and the spot where he fell did not look like this summit. It appeared to be a gentler, but much longer ridge. Diemberger is working on translating Buhl's diaries which were found by a Japanese expedition in 1958. I suppose the photos will be in that book when it is published.

The amazing thing to me is that after making the first ascent of Broad Peak, in westalpen style as they called it, they still wanted to knock off more peaks!

P.S. I just looked through my copy of Summits and Secrets. A grim photo of Buhl's last steps, showing where he walked off the cornice, is opposite page 129.

Thanks to all for your help. Regarding the name of the peak, probably Corax is right. The mountain is in the Vigne Glacier, but the guide told me that is belongs to Chogolisa group. I really dont' know, In the map I have, it is not showed:-(( Let me send you by e-mail 2 pictures:1) the map, 2) A panoramic pic with all the peaks saw from Ali camp (also the Chogolisa).

And strangely enough, it reminds me a little bit of Peru's Alpamayo. Great lighting, too!

Re: Quite a shot!

Look at the cornices...

Sad to say it's easy to see how Hermann Buhl died on this peak.

Re: Look at the cornices...

yes..unfortunately...
thanks to you too.
marco