Chukkung Ri is a rocky peak, similar to Kala Pataar above the village of Chhukung in the Everest (Khumbu) Region of Nepal. It lies to the North of Chhukung and takes approximately 3-4 hours of lung busting effort. It is often used as an acclimatisation trip by people going on to climb Imja Tse, especially if they haven’t been up to Everest Base Camp and Kala Pattar. The peak, small by Himalayan standards, doesn’t require any technical expertise, just stamina. However I believe it should be on many more people’s list who trek to Everest Base Camp, giving fantastic views of Imja Tse, Ama Dablam, Makalu, and of Nuptse you won’t get anywhere else. You cannot see Everest from here, and that's probably the main reason why Chhukung Ri is a lot quieter than Kala Pattar and Gokyo Ri. 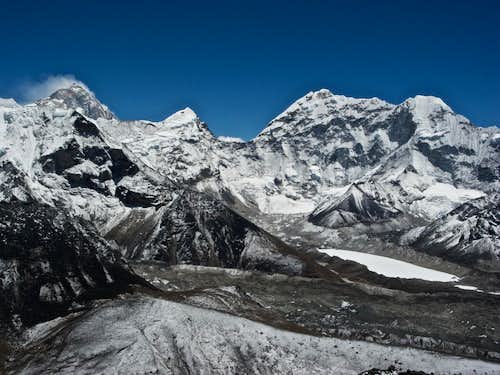 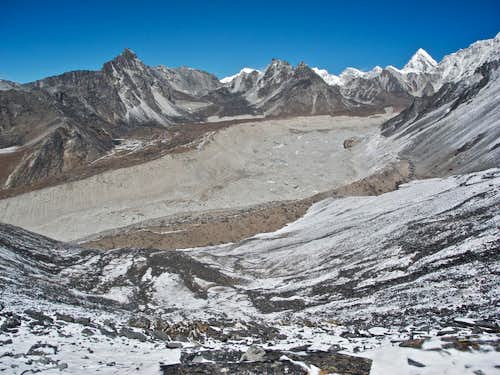 Most trekkers take a flight from Kathmandu to Lukla and then walk to Chhukung in around 8 days (including acclimatization days). One possible itinerary is as follows: Lukla - Phakding - Namche (2 nights) - Tengboche - Pangboche - Pheriche/Dingboche (2 nights) - Chhukung You can also visit Everest Base Camp first and then cross the Kongma La from Lobuche to the valley in 8-10 hours Chhukung can also be reached by crossing the technical Amphu Lapcha La from Makalu-Barun National Park.

A TIMS card (Trekker Information Management System) is needed for trekking in the Sagarmatha National Park. You can obtain it easily in Kathmandu or at the park entrance in Monjo. The entrance fee to the park is 1,000 Nepali Rupees. Chhukung Ri is on the Group "A" Peak List from the Nepal Mountaineering Association, so in theory you are supposed to pay: Royalty for up to seven members U.S. Dollars 500.00 Royalty for additional member up to 12 person U.S. Dollars 100.00 Which is pretty ridiculous and hilarious as well. Of course in reality no one bothers with any permit...

Starting from the village it takes around 2 hours to climb to the saddle on very well defined trails with cairns marking almost the entire way. Once you are on the saddle, turn left on a good and easy trail to the lower summit. For the main summit, turn right and traverse the ridge of loose scree and broken rocks. The trail is sometimes not obvious and quite steep. Expect 45mins to 1 hour from the saddle. It takes 2 hours to go down from the main summit. Bring at least 2L of water for the climb. I did it near the end of April and the streams were still frozen. 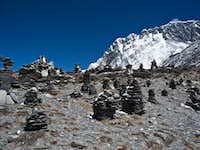 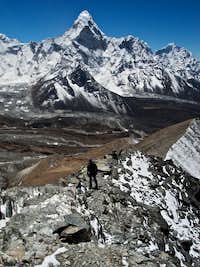 There is no real way of finding out about the condition of the mountain prior to travelling to the region. As mentioned above, provided you stick to the two main time windows you should be ok.

This peak is on the NMAs Group A list and requires a royalty fee to be paid... Royalty for up to seven members: US $ 500 Royalty for each additional member up to 12 persons: US $ 100

Please note that Chukkung Ri is commonly spelled as 'Chukhung Ri' (or "Chhukung Ri"), and Kala Pataar is commonly spelled as 'Kala Patthar'. I was very surprised to see this peak listed at http://www.nepalmountaineering.org/nma_peaks.php So officially a fee is required, but realistically nobody cares. The Maoist plague is meanwhile gone. It is actually safer to take the (longer, but very pleasant) Jiri approach because this avoids the risky airplane landing in Lukla.

Chhukung Ri itself is sometimes listed as a trekking peak, but apparently only in error. Kyazo Ri 6186 meters is the actually peak that was supposed to be listed, but apparently someone goofed on the website (or so we were told). According to the National Park, you don't need a special permit for Chhukung Ri, in fact from their office and for a few rupees you can purchase a certificate for climbing it.