Churchill Butte is a wide mountain located across US 50 from the Flowery Range in Lyon County, Nevada. Churchill Butte forms its own mountain range, and is bordered by the Stagecoach and Churchill Valley’s to the north and the Carson River to the south.

Churchill Butte isn’t high by Nevada standards, but has a prominence of over 1,500’ which provides a tremendous view for miles around to the desert peaks of Nevada, as well as distant views to the Sierra Nevada.

Churchill Butte is generally approached from either the north or the south, where there are primary entrances to federal lands.  The north is closer to Reno and Carson City.

Churchill Butte isn’t a destination popular from visitors for miles around.  It is more frequently visited by locals; some of whom go target shooting out there.

Churchill Butte is best hiked in colder weather months.  It doesn’t see much snow, although the north face approach may have snow in the heart of winter.  However, the area doesn’t get much precipitation since it is further out in a desert climate.  The best times to hike are mid-November through mid-March.  Summer is generally too hot. 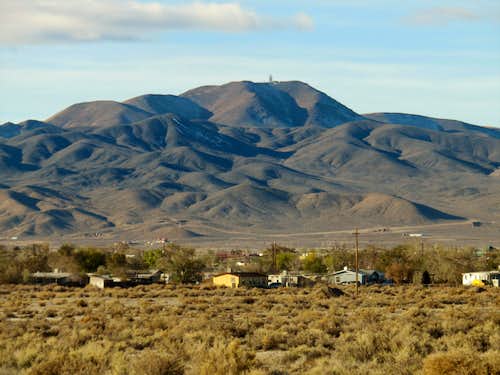 Churchill Butte from the east

For the north approach, head east on US 50 from Carson City about 3 miles east of the town of Stagecoach. Churchill Butte is on the south side of US 50.  From Reno, Nevada, it is quicker to head to Virginia City and head down Six Mile Canyon to US 50, and head about 13 miles east.

You can start at three different roads.  Micro Road is a well-graded dirt road that heads up towards Churchill Butte from the northwest. But it is pretty long and is best if driving in the area.  If hiking, it is better to start at the end of Shirlee Avenue or Mulberry Street.  This area is considered the outskirts of Stagecoach, but has sparse buildings and no amenities. 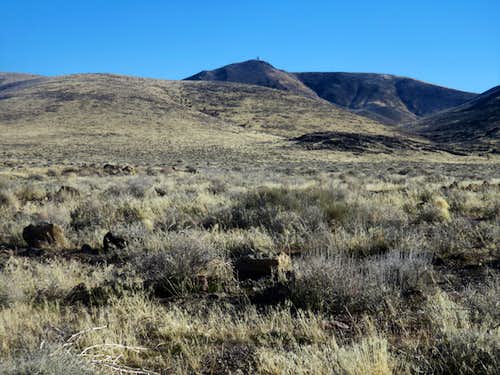 From the south, get to Silver Springs and take US Alt 95A south for about 8 miles to the turn off for Fort Churchill State Historic Park.  The park is about an hour from Reno (approaching from Fernley), or 45 minutes from Carson City via US 50 East.  Drive about a mile into the park.

The shortest route to the summit is from Shirlee Avenue.  A dirt road leads to a main road.  About 2 ¼ miles from the parking area, there is a turnoff leading to a road heading up the slope of Churchill Butte.  The road heads all the way up to the base of the summit.  From there, a faint use trail leads to the top.  The true summit is just north of the summit tower. It is about 3 ¾ miles and 1,500’ to the summit this way.  A nice way to extend the trip is to continue down the summit road all the way back Micro Road to Fir Street back to the car.  This is a nice loop of about 9 ½ miles total. 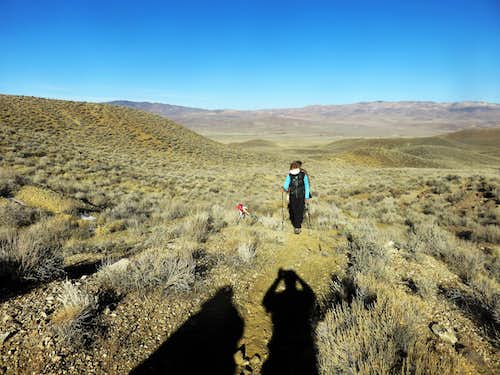 Heading up Churchill Butte from the north 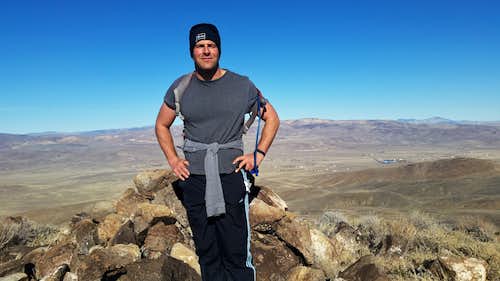 On the summit of Churchill Butte 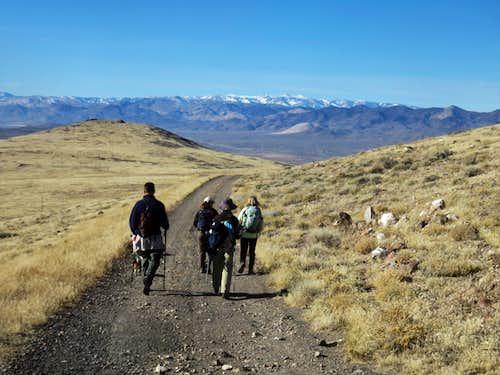 Heading down Micro Road from the summit - looking west

From the south from Fort Churchill State Historic Park, take a dirt road on the north side of the main road across from the ruins.  This road snakes around the right (east) side of Peak 1724 and weaves through a canyon before finally reaching the main summit road in about 4 miles.  It is another ¾ of a mile to the summit.  The elevation gain is about 1740’.

Another alternate approach is to come in from the east about 6 miles south of Silver Springs.  I haven't checked out this route specifically, but it is an access road to public lands.  The summit is about 5 miles from US Alt 95A, and public lands are entered a half mile from the highway.  For this route, you would take the same turnoff as described above for the route from Shirlee Avenue.

There isn’t any red tape to hike Churchill Butte from the north.  However, if approaching from the south via Fort Churchill State Historic Park they request $5 per vehicle per in-state residents and $7 per vehicle for out-of-state residents.  There isn’t an entrance gate, so it is generally an honor system.  The mountain itself is on federal lands managed by the Bureau of Land Management (BLM), so it is wide open without private landowners in the way.