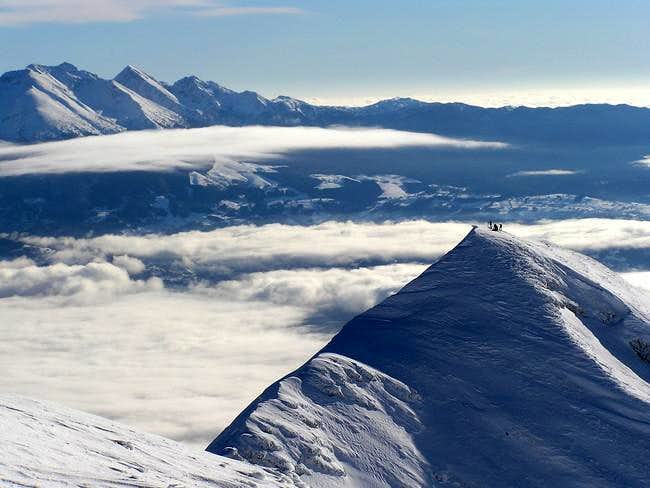 Were you skiing already?

So this is from Schiara group over Piave valley and Belluno? Gangolf can link to this picture, because he lacks pictures for Monte Cavallo group :-)

Vid, are YOU skiing already? :-) Triglav has over 2 meters of snow, THE MOST in the Alps at the moment (talking about stations which begin from zero, not glaciers)! I can't wait to get to snow but weather was bad recently. Here on Velebit we have over a meter of snow which is also nice. I was seriously thinking about waiting a New Year on Kredarica but my company rejected the idea because it would be too much for them to walk that much in snow so we'll do it on Velebit. Will you join us? :-)

If I was already skiing? Oh yes, actually it´s the 5th ski tour in this season.

The photo is taken from Monte Serva summit towards E, so looking at this photo you must immagine Belluno on the right side of your computer :-).

As to Monte Cavallo group (Alpago mountains), I´m often there in winter, so next time I´ll think of Gangolf and take a lot of pictures... :-)

Sasa, it's possible to come on Velebit. But I'm not certain yet. Depends on friends and weather.

I was not skiing yet this season. Weather is bad, snow is dangerous (above too much, below it's too wet and heavy). And I'm not so crazy about skiing as Viktor. Not any more, unfortunately :-((

Having the human forms in this photo really make the shot. Awesome.

with your magical pictures!!

Sea of clouds - Above the clouds(Album)