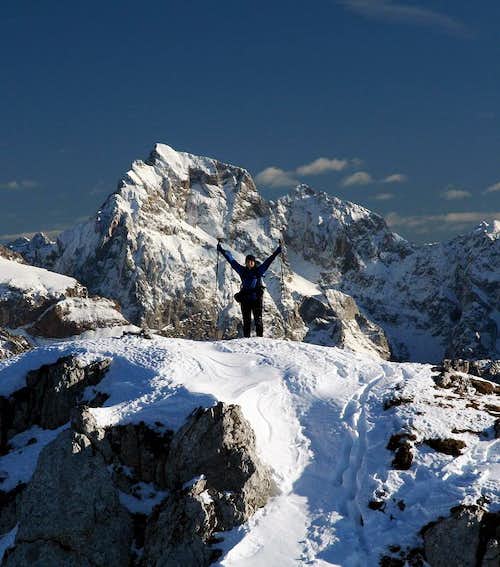 Cima del Cacciatore / Kamniti Lovec (=The Stone Hunter, also Germans name it Steinerne Jaeger) is one of those mountains, which exist in the first place to offer an ideal view on other, higher and more beautiful mountains. But greatness of the latter mountains would not be such if the former mountains would not exist.

Cima del Cacciatore / Kamniti Lovec is standing north of the brilliant Jôf Fuart / Viš group and north-east of the great Jôf di Montasio / Montaž chain. That's why from its summit you can enjoy one of the finest panoramas of the whole Julian Alps. Its small group is quite stand-alone, rising high above the valleys of Valbruna and Mrzla voda / Riofreddo. It is attached to the wild chain of Cime delle Rondini / Lastovice and over it by the main Viš group on Sella Prasnig / Prašnik saddle, 1491 m.

The statements above don't mean that Kamniti Lovec is not a fine mountaineering goal itself. You can choose among hikes of various length and demand, from a 4 hour walk to a just good 1 hour hike from Višarje / Monte Lussari, 1766 m. From the main ridge just below the highest point you can do also a fine ski tour. Having in mind that you can reach Višarje / Monte Lussari by a cable-car and then ski down from the summit to Camporosso, 800 m, you can understand why it's one of the most enjoyable, although not just easy ski tours. Over Prašnik saddle, 1491 m, it is also possible to do a great mountain bike round tour, connecting valleys Valbruna and Mrzla voda / Riofredo. As Kamniti Lovec does not have high walls it is not a goal for rock climbers.

They say that the mountain has its name by a rock figure below the summit, reminding on a hunter. The legend also says that a wild hunter was shooting from there towards the holy church on Višarje / Monte Lussari and was because of that turned in stone.

On the north fore-summit of Cima del Cacciatore / Kamniti Lovec stands a famous pilgrimage church of Sta. Maria which is worth visiting even if you're not a believer. Besides being a holy place it also hosts nice frescoes, created by Tone Kralj. In summer thousands of pilgrims visit this church, but even though one good hour away on the summit of Kamniti Lovec crowds of mountaineers are not so big any more. Višarje / Monte Lussari can be reached by a modern cable-car from the Žabnice/Camporosso. In the past this cable-car was reaching Višarje / Monte Lussari from the Valbruna valley, a few years ago it was moved closer to Tarvisio/Trbiž. The northern slopes of Višarje / Monte Lussari are covered with forrests, but through them many ski tracks are cut. Besides with the main cable-car, skiing is supported also with some ski-lifts.

For the general orientation see the Julian Alps group page.

The other two options to reach the summit are longer. They start in two side valleys:

Višarje / Monte Lussari can be reached by a cable-car, or by many marked paths (3-4 hours from valleys). One old pilgrimage path goes up from Camporosso/Žabnice through the valley of Rio Lussari, the other one directly from Tarvisio over the summits of Prisojnik, 1324 m, and Florjanka, 1658 m. The very summit of Kamniti Lovec can be reached by two marked paths: the usual one from the north and the less common one from the south from Sella Prasnig / Prašnik.

1. From Višarje / Monte Lussari. By the marked path No. 613 into the basin north of the main summit (the result of the last glacial age), then towards the east on the summit ridge and over the fore-summit to the top. An alternative just below the summit goes also over the slopes towards the ravine between the two summits, and then through it (secured by a ladder) on the notch and on top. Marked path, some steep slopes below the summit, 1 hour 15 minutes. Difficulty on the SAC Hiking Scale: T3. This is also a popular ski tour.

2. From Sella Prasnig / Prašnik saddle, 1491 m (can be reached by a cart-road either from Valbruna/Zajzera or Riofredo / Mrzla voda). Marked path, medium hard hike up. You go up the slopes towards the N some 150 m, and there on the crossroads turn right (inscription). Through a beautiful light forrest you ascend up and then cross the slopes below the ridge on the eastern side. The last 150 m are steeper, crumbly and where necessary secured by steel ropes. 1 h 30 min. Difficulty on the SAC Hiking Scale: T3. This ascent can be combined with the mountain bike tour, which encircles the whole group. Starting in Tarvisio, you bike into Valbruna, then towards Pellerini hut, but before the lower station of the material cable car you deter left and bike/walk up by a steep road on Sella Prasnig / Prašnik. Then as described on top. Biking down into Valle di Riofreddo / Dolina Mrzle vode is also very steep. Another possible mountain bike tour: Valbruna, 860 m - Višarje / Monte Lussari, 1760 m and back.

Cima del Cacciatore / Kamniti Lovec can be climbed almost any month of the season. Only in hard winter the summit part of the main ridge can be problematic. In High snow there's a big danger of avalanches in the basin north of the summit and if the snow is hard or icy, you'd need a full winter equipment for the summit ridge. Otherwise the best months are July to October and for tour skiing February to April/May. For weather see here. Even better site is wunderground - here's the direct link to Kredarica station, 2515 m (below Triglav summit).