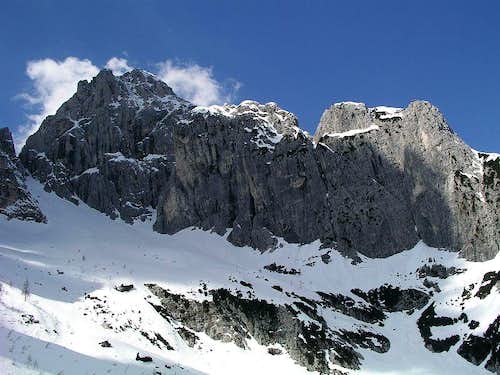 The narrow group of Viš massif has towards the East four high summits, which were in 19th century by locals all called Gamsja Mati / Gamsmutter / Madre dei Camosci. It was the great pioneer of Julian Alps, Julius Kugy, who gave them distinct names. So, the easternmost summit of this small group got a name: Divja Koza / Kaltwasser Gamsmutter / Cima di Riofreddo. Cima di Riofreddo is a wonderful summit, a mighty fortress, sending high walls and sharp ridges on all sides. It is the easternmost cornerstone of the whole narrow Viš group. Its most prominent side is of course its northern wall. More than 700 m of vertical rocks hosts several beautiful classical climbs and is in the whole monumental set of walls above Rifugio Pellarini the most often climbed. Also the Eastern wall, rising above the end part of Riofreddo valley, is very monumental and attractive for climbing. The southern face and the ridge towards the Western neighbours are less steep, but still rocky and rugged, offering one easy ascent to the summit only. These some 500 m high rocky slopes are on the upper part cut by horizontal ledges, which are used for a beautiful ferrata, named Anita Goitan, which now brings the summit of Cima di Riofreddo closer to a common mountaineer. But we shall return to these famous ledges later.

Cima di Riofreddo from the summit of Vis 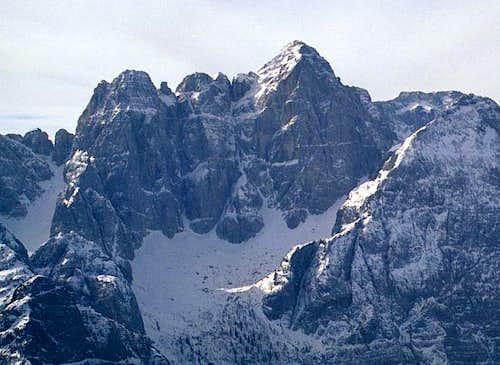 Cima di Riofreddo (the leftmost summit) from the N

South-East of the main summit the rocks of Cima di Riofreddo lower down to a narrow notch, which means the highest point of the beautiful Riofreddo valley. This is Forcella di Riofreddo / Trbiska škrbinica, 2240 m, where the narrow Viš group ends and the beautiful ridge of Cima del Vallone / Trbiška Krniška špica, 2368 m, begins. This notch is an important passage and can be reached by marked and not marked paths from several sides. In good conditions it is also one of the finest goals for tour skiing in the whole Viš group. On the summit of Cima di Riofreddo another wild crest branches from the main one. This is the Vergini/Device and Rondini/Lastavice ridge - not high, but very wild summits, running in the NE and N direction. Finally the western ridge attaches Cima di Riofreddo with Innominata and the other summits of Viš group.

The ascent of Cima di Riofreddo is by no means easy. No marked path reaches its summit, but the ferrata Anita Goitan comes close. From it you still need to climb some good 100 m, difficulties are in the range of UIAA -II. Cima di Riofreddo was first ascended by J. Kugy, R. Baumgartner and their guide A. Komac in 1885.

The Ledges of Gods 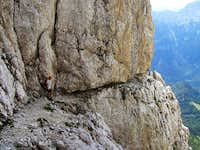 On the Ledges of Gods

On the mountains of Viš group vertical lines are predominating. But still, as on so many places in Julian Alps long and interconnected systems of ledges can be found, enabling fine passages, where otherwise only a hard climbing would do. It was Julius Kugy again, who explored these systems thoroughly. Being used that mountains reveal the highest secrets to their lovers, he was still highly surprised, discovering, that such a system of ledges runs almost around the whole higher part of Viš peak. Only one part of the ring was broken, but also there Slovenian climbers later forced the passage. And not only that. Kugy discovered, that the broadest ledge persistently continues also over the slopes of Madre dei Camosci / Gamsja Mati / Gamsmutter, further over the slopes of Turn/Torre and Innominata and finaly over the northern and eastern face of Cima di Riofreddo. On Forcella di Riofreddo of course the ledge, where nowadays Anita Goitan ferrata goes, cuts horizontally the whole southern face of Cima di Riofreddo. This is one of the greatest wonders of Julian Alps. Kugy, being also a lyrical person, imagined, how on such ledges, covered with a fine white sand gods themselves are walking, hands in pockets, discussing important themes, while all around them there are only vertical abysses. That's why he named the whole system The Ledges of Gods. Some marked routes (ferratas) nowadays use these ledges, while a great portion of them is still left unchanged. Let it be so! 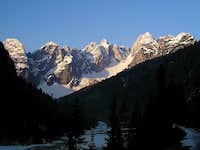 Much longer is the approach through the beautiful Valle di Riofreddo / Dolina Mrzle vode. The road in it deters in Val Rio del Lago by the Riofreddo village, 833 m, but is closed for public traffic from the very beginning. Through the valley to Forcella di Riofreddo, 2240 m, you will need some 4 hours, and almost two more to the top.

All northern ascents start in Valbruna/Saisera, at Rif. Pellarini, 1499 m. From the Tarvisio-Udine highway you exit near Ugovizza/Ukve, drive a bit towards Tarvisio and then turn southwards into the valley.

Route 5: You can come by Ferrata Anita Goitan also from the West, for example from the summit of Viš.

Forcella delle Vergini from the North. A 250 m high couloir, lower part wide enough and to 40 degrees steep, upper part narrow and much steeper. Some 60 m below the notch the couloir branches, the left branch can be skied, but is only some 2 m wide and up to 55 degrees steep.

On the web there's a short guidebook in Slovenian language, with some rough topos here.

Descents. You do routes #2 to #8 from Rif. Pellarini, so you need to return on the northern side of the mountain. You descend by the normal route southwards, follow the Anita Goitan ferrata to Forcella di Riofreddo descend in the upper part of the valley and the over Sella Carnizza / Žabniska škrbina, 1767 m, down to Rif. Pellarini. If you conclude any of the climbs on the Ledges of Gods, you can follow them towards the right (westwards) and descend by the NE ravine of Viš (Golla NE). It is possible also to follow the Ledges of Gods towards the left (eastwards). First they are comfortable, when they get lost you ascend up by ravines some 60 m and cross further to the left on the southern side, soon reaching Forcella di Riofreddo. 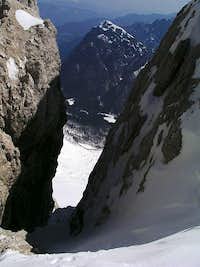 Summer and autumn months are the best. In these areas the weather is most stable from July till October. A winter ascent from S requires full winter equipment and must be hard enough.

In Julian Alps, camping is officially not allowed, or may be only on high regions in emergency. The area is good covered with mountain huts wich offer you all the comfort needed for a reasonable price, and in winter the majority of them also have permanently opened winter rooms.