The highest mountain of Sette Comuni group already had its page on SP, but was deleted. Its author and other knowledgeable members are welcome to contribute to improve this page. 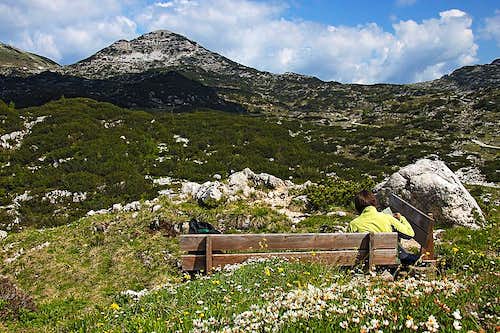 The charming high plateau of Sette Comuni is bordered on the north by a long arc of mountains, well exceeding the altitude of 2000 meters. Their northern faces are rocky and are falling deep down to Valsugana, where the banks of Brenta River are on altitudes even below 400 meters. From the north, these mountains look most beautiful and also Cima Dodici is from Borgo Valsugana seen as a nice cone peak. Towards the high plateaus of Asiago, so towards the south, the mountain chain of Cima Dodici lowers gently, those slopes are mostly overgrown with dwarf pine and grass and rocky only on top.

All summits are easily reachable and the net of marked paths is good. The most important summits from the west towards the east are: Cima Vezzana, 1908 m, Cima Manderiolo, 2049 m, Cima Portule, 2308 m, Monte Trentin 2325 m, Cima Dodici, 2336 m, Cima Undici, 2228 m, Monte Ortigara, 2106 m and Cima della Caldiera, 2124 m. South of the main crest, between Cima Portule and Cima della Caldiera, on the altitude of around 1900 m a high plateau lies. Of this plateau on many places rounded summits which also exceed 2000 m are rising and only more towards the south, walleys and forrested slopes are lowering down to the plateau of Asiago town. Similar are characteristics of our mountain, Cima Dodici. It is steep and rocky on the northern side, but southern slopes are steep only just below the summit, on lower areas they are more gently lowering on the plateu. It is primarilly the goal of hikers and mountain bikers, but also in winter people are visiting it. The area is ideal for tour skiing and in good conditions skiing is possible even from the very top.

The origin of mountain's name is obvious. To the people of Borgo Valsugana the mountain serves as sun dial. More is shrouded in mist its old Cimbrian name: Ferroso. It is related to a Scandinavian god Frea.

Geologically, as most of the central part of higher Asiago Tableland, also Monte Ortigara is built of limestone from the Jurassic period (southern side), and of Triassic dolomite (northern side). 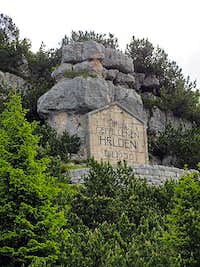 On the plateaus of Sette Comuni some of most fierce battles were fought during the WW1. In the beginning of the war the frontline was crossing the plateau, then descending towards the north down to Valsugana, cutting the valley at Borgo and then continuing into Lagorai Group and towards Dolomites. Remains can be seen everywhere even today, almost 100 years after the war. The high plateau below Cima Dodici and Ortigara is criss crossed by military roads and paths. Everywhere you will see remains of buildings, shelters, trenches and gun posts. On the plateau there are more than 40 graveyards, with thousands of fallen soldiers from both sides. Some areas are arranged as open air museums, where plates with pictures, maps and explanations teach you about the events. This everything is a real welcome enrichment on often long and a bit monotonuous approaches. And, what is the only benefit from those war times - many roads and paths can now serve to hikers and mountain bikers. On the plateaus, especially mountain roads are very appropriate for mountain biking.

Cima Dodici from the north, from Borgo Valsugana

I have done only one round tour, hiking up and down by two approach routes. So, the ascent routes will be more or less only listed, with some additional characteristics mentioned. Fausto Carlevaris posted already the south approach, I will add route description for the SW approach. The southern side routes are mostly easy, only in poor visibility you should be very careful. The high plateau is very broad and many military paths can be very deceiving. So, better carefully keep to marked trails. The northern ascents are more demanding (more altitude) and route descriptions would be very welcome.

1. From Malga Larici by the main ridge. This is a very nice and panoramic hike which crosses many summits and can be combined by the return over Bocchetta Portule (route #2). We start on malga Larici, 1625 m, and go first by the ex military road towards Bocchetta Portule. At the end of Val Renzola, where the road turns from the NE direction to the SE direction, a well marked path deters left on the main ridge (inscription: Cima Portule). We can reach the main ridge from Malga Larici as well - by going immediately northwards and adding thus also Cima Larici, 2033 m (that's longer). From Porta Renzola, E of Monte Erba, we continue by the main ridge towards the E. First we ascend Cima Portule, 2308 m, return towards the N and then continue over Monte Trentin, 2325 m, towards the NE. From the saddle below Cima Dodici we go across the S slopes and then towards the N on top. Must be some 4 h, medium hard walk up.

6. From the north. We start the tour on the road near Villa Argentina, some 600 m. The path No. 211 goes towards the SE. First through the woods, then into Valle delle Trappole. There the path branches. The left branch goes to the bivouac, while the right branch goes west of it and later comes to the bivouac as well. But I guess by it you can shorten the ascent on top. Please add description (the ascent to the bivouac is described already)! This is a long ascent and for 1750 meters of altitude gain you for sure need some 4 h 30 min.

Any time of a season. In winter conditions the ascent is much harder, but when conditions are good for skiing, the ski tour can be done from the very top. On the high plateau fog can be dangerous, especially in winter when marks on paths are under snow. 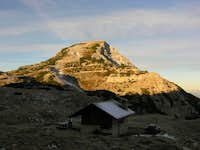 On the high plateau and as well on the northern slopes there are many shelters which originate from the WW1 and are some in better, others in more poor condition. Mountain huts are in lower areas - some of them are private huts, others are "agriturismi", so the huts on mountain pastures which offer food and drinks, local products and also shelter. Bivouac Busa delle Dodese, 2050 m, is the most recommendable shelter in the vicinity of Cima Dodici. For only ascending the mountain it might be of little value, but on the big crossing of the whole mountain chain it can be of great value, splitting the tour on two almost equal parts. The bivouac is in a very good condition (2013), always opened and has 6 beds. 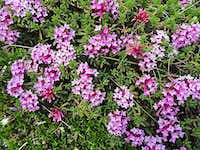 > Can you describe the directmost ascent from the north?

> Have you been on top in winter conditions? Have you skied down Cima Dodici?

> Do you have good pictures from the northern side?

> Do you want to add any other valuable information about the area (WW1, geology, fauna & flora)?