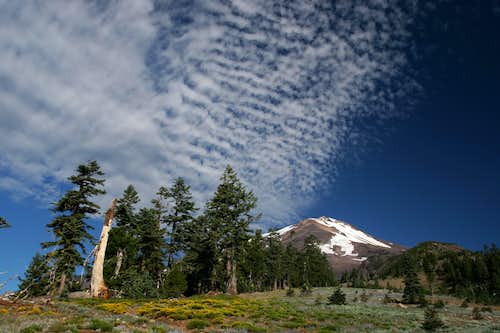 The Clear Creek Trail, climbing up Mount Shasta’s southeast corner, is proof that interesting routing or trail engineering is not necessary for a trail to be scenic or even rise to the level of being spectacular. Ascending a massive rib that rises out of the dense forest of the McCloud River flats, the Clear Creek Trail is as close to a straight line as a trail on Mount Shasta is likely to be. What the trail lacks in an interesting course it more than makes up for in epic, jaw dropping scenery, the variety of views and the sense of monumental vastness to be had in the bosom of the mighty volcano’s hinterland.

Although the trail begins subtly, the vistas soon explode from the trail, as Mud Creek Canyon, Mud Creek Falls and Mount Shasta with its attendant glaciers loom high above the trail. This scene alone would make a worthy destination, but the trail continues, passing through expansive fields of rabbit brush and lupine with the great cone of Mount Shasta seemingly floating overhead beckoning one to continue. Finally, the trail climbs off of the rib and enters the colossal basin drained by Mud Creek. Here, great cliffs and turrets rise like citadels above the barren, volcanic terrain, climbing inexorably toward the summit. In the midst of this arid landscape, the gushing springs of Clear Creek create a verdant oasis. Experiencing these wonders does not come at a heavy price, as the Clear Creek Trail climbs, but never uncomfortably so. The ease of the hike and the unforgettable nature of the vistas make this one of the finest hikes on Mount Shasta.

Although the Clear Creek Trail is a great trail on its own, it also provides access to three routes that climb to the summit of Mount Shasta. The most heavily trafficked of the three is the Clear Creek Route, which is the least technical (which is to say not technical) route that leads to the summit. It was this route that the horse famously photographed on the summit climbed the mountain. This route gets busier later in the season after Avalanche Gulch has lost much of its snow. The second route accessed by the Clear Creek Trail is a variation of the Clear Creek route that skirts the Konwokiton Glacier en route to Misery Hill. The last route climbs Wintun Ridge. This ridge forms the divide between the Mud Creek drainage and the Wintun Glacier, the third largest Glacier in California. The route climbs close to the southern edge of the glacier on its way to the summit. 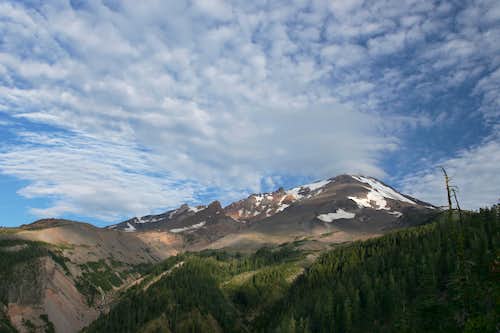 Like so many other trails on Mount Shasta, the Clear Creek Trail begins its journey in an old growth red fir forest. The Shasta Red Fir is distinct from the red fir’s that are found in the Sierra Nevada further to the south. The variety found on Mount Shasta also grows in the eastern portions of the Klamath Mountains and further to the north in parts of the southern Oregon Cascades.

On most maps, the first 0.75 miles are shown as a nearly straight trail, climbing directly up the mountain. It is possible that this may have been the case in the past. If this was the case, the trail has since been redesigned. Now it follows a series of switchbacks, rounding a couple of low bluffs rather than ascending them. In so doing, the trail passes through a couple of dry gulches. Throughout this part of the hike the trees maintain a constant canopy. At times one can see that the edge of Mud Creek Canyon is near, though if one remains on the trail it is still out of sight. Eventually the trail swings close to the edge of the canyon here the forest cover opens up. 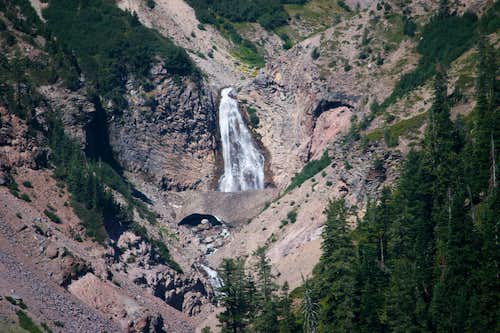 Once the clearing is reached, a short jaunt to the edge reveals an astounding spectacle. Spreading out below is Mud Creek Canyon. This massive trough, the largest on Mount Shasta, is believed to be the remnants of an earlier buildup on the volcano, before more recent eruptions gave the mountain its present shape. At this vantage one is nearly level with the confluence of Mud Creek and Clear Creek. The latter is composed of a long series of cataracts totaling about 1350 feet.

Though one can make out the sound of Clear Creek, it is the sound of Mud Creek Falls that dominates the aural landscape. The falls, Mount Shasta’s largest in terms of volume are about 200 feet high and even though they are a mile across the canyon from the vista, they still look large and impressive. Even so, they are dwarfed by the massive canyon. Above all of this presides the upper reaches of Mount Shasta. Numerous towers including Shastarama Point and Thumb Rock march upward toward the summit. Three glaciers, the Konwakiton, the small Watikins and the massive Wintun are all visible. So amazing is this vista that it is worth the effort to drive to the trailhead for only this short hike. 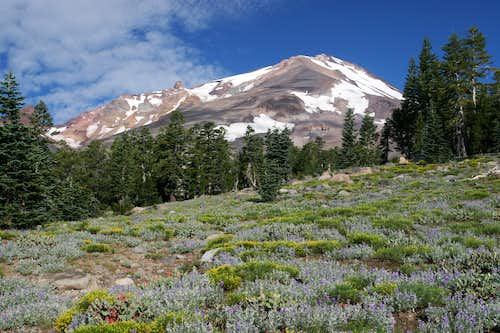 Mount Shasta and its glaciers from the Clear Creek Trail

If one can tear away from this stupendous panorama, the Clear Creek Trail still has more sights to offer. Climbing as it nearly always does, the trail parallels the rim of Mud Creek Canyon, generally staying 40 or 50 feet to the east of the precipice. Having left the dense canopy of the red firs behind, the trail is now flanked by trees on both sides. Long ago this was a road cut into the increasingly small and thinning forest. Though the swath does seem vaguely unnatural, nature has gone about its healing work and made this wooded alley an attractive route for the trail. As one climbs higher, the alley through the trees widens and eventually disappears altogether, revealing a deepening dry gulch to the right of the trail.

The ground here is blanketed with rabbitbrush and lupine, adding a lot of color to the scene. Looking north toward the horizon looms Mount Shasta, the ice clad cone constantly beckoning the hiker and climber forward. The Watkins and Wintun Glaciers are always visible and at times the Konwakiton Glacier makes an appearance. Below the upper reaches of Mount Shasta, Wintun Ridge appears to be the immediate goal of the trail. This is the case, as the trail will eventually pass right beneath a rocky knob that marks the commencement of that route to the summit. 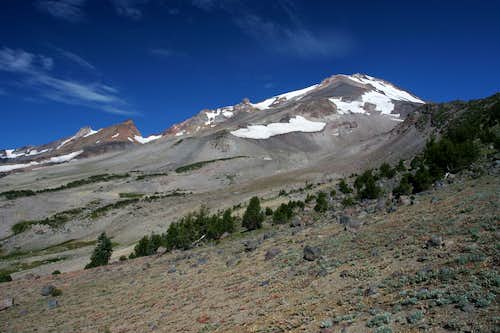 The upper basin of the Mud Creek drainage on Mount Shasta

After climbing straight and steady for 1.75 miles, the open trail finally reaches what looks like the obvious top of the long climb, which is right below the beginning of Wintun Ridge. Here the trail levels off for the first time, at about 8,300 feet, and enters a small copse of whitebark pines. These trees supplanted the red fir as the dominant tree as one gradually climbed higher. Passing through the trees reveals another stunning spectacle. Mount Shasta, in all of its barren, massive and mighty glory spreads out from the trail.

To the left Sargents Ridge completes in climb to the summit in fantastic fashion, crowned by the spires of Shastarama Point, Point 11,267 (a tiny sliver of the hidden Mud Creek Glacier is just visible clinging to the base of the spire) and Thumb Rock, which cradles the Konwakiton Glacier. Overhead to the right, Wintun Ridge forms the divide between the tiny Watkins Glaciers and the enormous Wintun Glacier. The upper cliffs lining Mud Creek Canyon disrupt the broad, barren plain extending to the west. Closer at hand, the large Clear Creek Meadow complex fills a shallow valley. It is a dazzling panoply of alpine splendor. 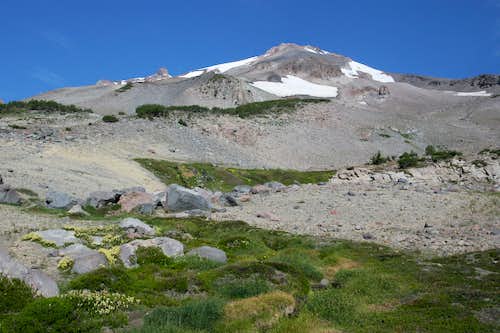 For those intent on climbing Wintun Ridge, this is the point to depart the Clear Creek Trail and begin the ascent of the ridge. If the destination is Clear Creek Meadows or the Clear Creek route to the summit, then continue on the trail. Thankfully, after the relentless climb to this point, the trail is reasonably level, gaining only 150 feet in the 0.5 miles to the meadows. For those heading to the summit, this is the last chance to move forward without moving up. The trail arcs gradually over towards the meadow, which is the obvious destination of the trail. The trail eventually reaches the banks of Clear Creek, recently emerged from a beautiful spring. Here, the upper slopes of Mount Shasta are a desolate volcanic wasteland, inhabited only by rock, ice and small krummholz trees. In the midst of this, a complex of springs produces clear, cold water which nourishes the amazingly lush Clear Creek Meadows. The creek’s moniker comes from the fact that the water is clear and clean, not filled with glacial flour like the adjacent Mud Creek. High over the meadows, Mount Shasta overshadows everything else, drawing the eye inevitably to the summit. It is easy to lose yourself in such a spectacular setting.

To climb the Clear Creek route, cross Clear Creek and follow an obvious use trail, which eventually leads to the route to the top of Mount Shasta. For those seeking to make basecamp in preparation for a summit ascent, it is customary to establish camp in one of two places. For a Wintun Ridge ascent, the area around the small copse of trees 0.5 miles from Clear Creek Meadow is a good place. If the anticipation is climbing via the Clear Creek route, than the usual place to make camp is on the west side of Clear Creek, in a grove of krummholz trees. Even if not making the trip to the top, Clear Creek Meadows makes a fine backpacking destination, with lots of room for awesome off-trail exploration. 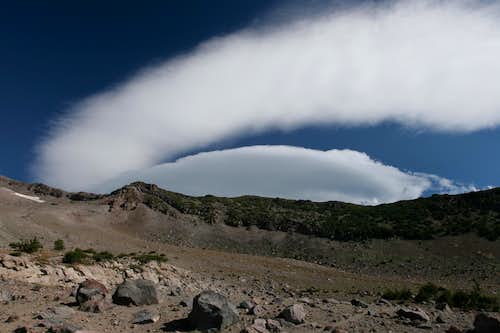 From Mount Shasta, head east on Highway 89 to McCloud. Continue past the main McCloud intersection on Highway 89 for 3 miles. Turn left onto Pilgrim Creek Road and proceed for 5.3 miles. Turn left on Forest Road 41N15, staying straight for 4.9 miles to where it intersects Forest Road 31. Stay straight, crossing over Forest Road 31. Go only 0.1 miles and then stay left. Continue another 0.5 miles then turn left onto 41N25. Stay on this road for 2.2 miles to the trailhead. This road is passable for low clearance vehicles. The road is well signed and there should be no confusion regarding which way to drive to the trailhead.