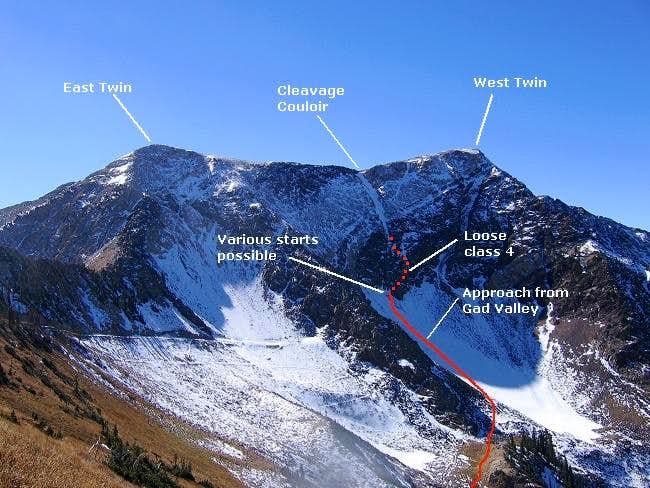 The Cleavage Couloir is a snow/ice couloir located on the upper half of the northeast face of American Fork Twin Peaks. The couloir tops out on the long flat ridge connecting the east and west summits, just a short distance to the east of the higher West Summit.

The couloir begins on the upper half of the face, and therefore does not offer as long of a sustained climb as found on the nearby Pipeline Couloir further to the west. However, with its more northerly aspect the couloir will retain snow much later in the season, and in some years may not melt out at all.

Take the 6200 South exit (exit #6) off I-215 and follow highway 190 south-east approximately 2 miles to the intersection with Big Cottonwood Canyon road. Continue straight through the stoplight and follow the road another 4 miles to the mouth of Little Cottonwood Canyon, where an electronic billboard on the right provides current road and/or weather conditions.

Continue east up Little Cottonwood Canyon approximately 7 miles past the billboard to the Snowbird Lodge parking area on the right (south) side of the road.

Beginning from the lower Snowbird parking area cross the concrete bridge and follow the service road a short distance up the hill, then follow it to the right (west) to proceed into Gad Valley.

As is typical with ski resort hiking, there will be a number of service roads criss-crossing the slopes of the mountain. Simply follow the major road heading south as it winds its way up the mountain.

The road passes a lodge and restaurant, then continues climbing until it passes the top of the Gadzoom ski lift. Beyond the top of this lift the road climbs a short steep hill, then fades out becoming a trail.

The summit of American Fork Twins dominate the view to the south, and the Cleavage Couloir will be clearly visible on the upper half of the northeast face, just to the left of the west summit of the peak. It is important to make some good mental notes on the location of the couloir, since it will be hidden from view for the remainded of the approach.

Somewhere in the vicinity where the road fades to a trail, leave the trail and routefind your way across the talus slopes leading up to a point well below the bottom of the couloir, as shown in the route overview photo above. The talus slope may contain some snowcover well into the summer, and possibly year-round during heavy snow years.

At the upper end of the talus field begin ascending the steep rock at the base of the peak's face. The terrain here is steep and there is much loose rock, so use extra caution - in many spots a slip would most likely be fatal. Some parties may wish to use a rope to belay short sections of the climbing.

Make your way upwards as the terrain dictates, moving whenever possible in the direction of the couloir, which will remain hidden from view until you are upon it.

The couloir will appear rather short from its base, although the view is somewhat deceptive and the couloir will be longer than it initially appears. At the top of the couloir turn right (west) and proceed a short distance along the ridge to the West Summit.

Descent can be made either to the east (Northeast Ridge route), or to the west (Gad Valley route). Either route will return to Gad Valley, where ski service roads may be followed back to the Snowbird parking area.

Crampons, helmet, and ice tools. A rope and snow/ice protection for those parties wishing to use belays. A rope may also be desired on the loose class 4 rock leading up to the couloir.

Thanks to Summitpost member dunsum, who had previously climbed this route and led the way while joining me for another ascent.

Credit for the naming of this route goes to Summitpost member PellucidWombat, who coined the name in the summer of 2005. If the route has been know by another name prior to this, please post the info here, and I will change the route name accordingly.