close-up on Makalu as seen from Mera Peak 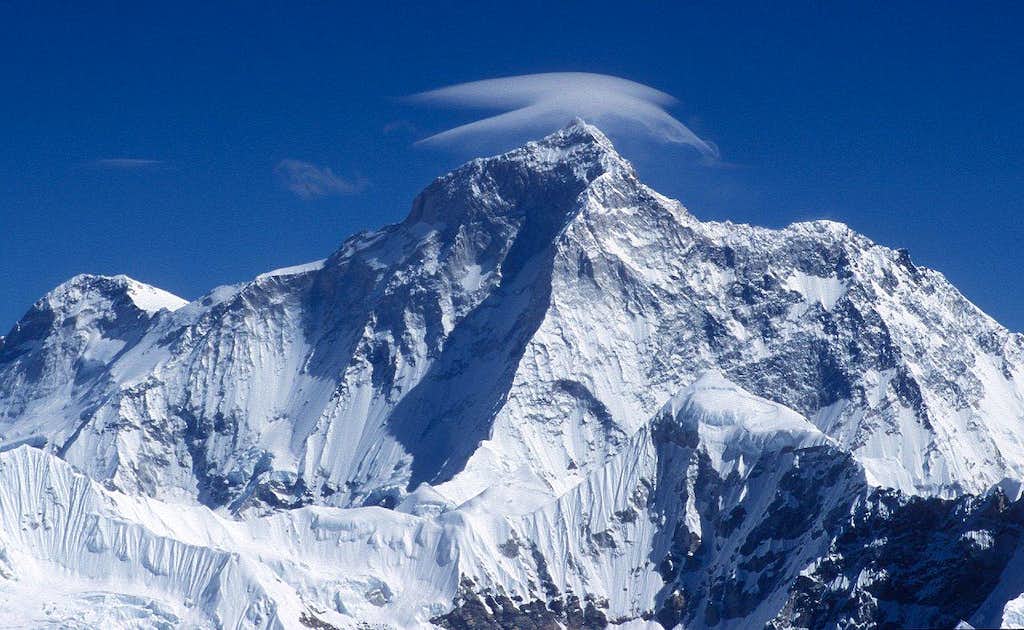 This picture is simply breathtaking. It would make a great poster.

Mathias this is a stunning, fantastic shot... congrats!Do you have any info. on routes on Makalu?

thank you - all - for your comments. Routes? I only have an old book from Messner form 1986, so I don't have info about routes without further research

The regular NW ridge route is pretty much the left skyline, but partly hidden. There is a Kukukzca variation on this too.

Right of that is the famous west face - essentially unclimbed, the 'last big problem' of the Himalaya, though the Russians did a route up the righthand side of it a few years ago.

Right of that is the stunning West Pillar, climbed by Paragot's French team in 1971 and repeated by Roskelly, Loretan & Troillet and a few others. Maybe the most impressive line on an 8000er.

Right of that again is the south face, soloed by Beghin in the late 80s, but maybe has a Czech route on it too ?

The right skyline is basically the southeast ridge, which has had at least two ascents, the most recent by Dan Mazur and friends in 95 or so.

A similar photo to this was taken from a plane in the 1930s and mistakenly published as being of Everest - mainly as it looked so impressive !

The True Big Mac already super-sized and not requiring fries.

One of the best shots. So clean. I like the clouds over the summit.

It will one of the best shot of Makalu. A lot of thanks for posting.

Never seen before this side of Makalu. No wonder they thought it to be Mount Everest back in the 30's. Great shot, Mathias. Congratulations

What a beautiful shot! Deserves the front page for sure. I made it the signature photo of the Makalu page.

Your pictures are wonderful!

Terrific shot Matthias. I'm setting off for Mera in 3 weeks now, looking forward to seeing this view for real and only hope I can shoot it half as well!

Re: Now I can't wait

Good luck to you, especially concerning the weather! Which route will you take?

Re: Now I can't wait

The normal trekking route, base camp on the Mera La, high camp on the glacier, then traversing the north and central summits on the way to the south summit. Looking forward to it big time!

Those are Lenticualar Clouds, their formations tell of increased wind activity its typcial for them to form over the summit of a mountain. There's a beutiful shot of Mt Hood that has a very well developed lenticular over her summit.