When the days become boring....

When the days become more laborious and time-consuming, when the problems become too many and being with others is more problematic ...the solution is to reach for a few hours these delightful places where the daily life is resized: Open spaces, clean air and clear, silence and large panoramic, sense of peace. The small everyday tasks go immediately into the background to make space to the sense of magic and wonder especially ascent these peaks over 2000m. where the eye goes away, near the sky.:)

Another extraordinary summit of Pasubio: Col Santino 2110m., it belongs to the north-east ridge of the group formed by the Col Santino, Col Santo and Mount Pazul.
Col Santino is much less attended other surrounding peaks, but the view from its summit is great.
Here you can meet chamois, roe and see the eagle.
The top is characterized by spectacular "rosso ammonitico" rock formations called Coronelle.

After leaving the car in the resort Cheserle, continue along the path sat 101 till the refuge Lancia.
Then climb along the sat path 131 that leads to the Sella dei Colsanti 1980m.
Take the right path military that reach the top and coasting the Col santino.This path go down till the Sella delle Pozze 1903m.

In sunny days the view is great and extends from Palon to Piccole Dolomites, Presanella glacier to the Brenta, and Dolomites of the Tyrol.

From Vallarsa ( north Pasubio)
Car:
Vallarsa can easily be reached from north and south on the Brennero state road 12 or the motorway A22, exit at the toll gate of Rovereto Sud, from there on the SS46 Pasubio or the road SP89.
Train
To the railway station of Rovereto and from there by bus.
Airplane
The nearest airports are Verona Catullo (90 km), Venice Marco Polo (195 km), Milan Linate (245 km) and the new airport in Bolzano (60 km)

Rovereto: from Piazza Podestà drive along the SS. n°46 del Pasubio, this is the natural access to the Vallarsa Valley, then after the S. Colombano bridge go left and take the SP. n° 50 for Trambileno to Giazzera: the start for the excursions. 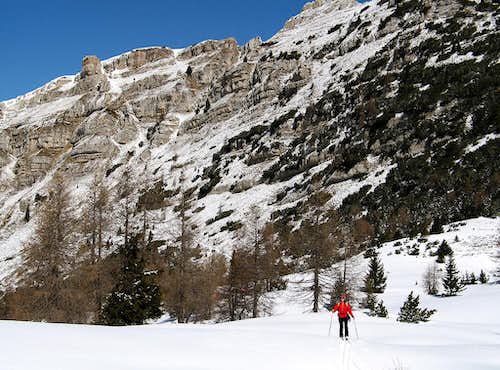