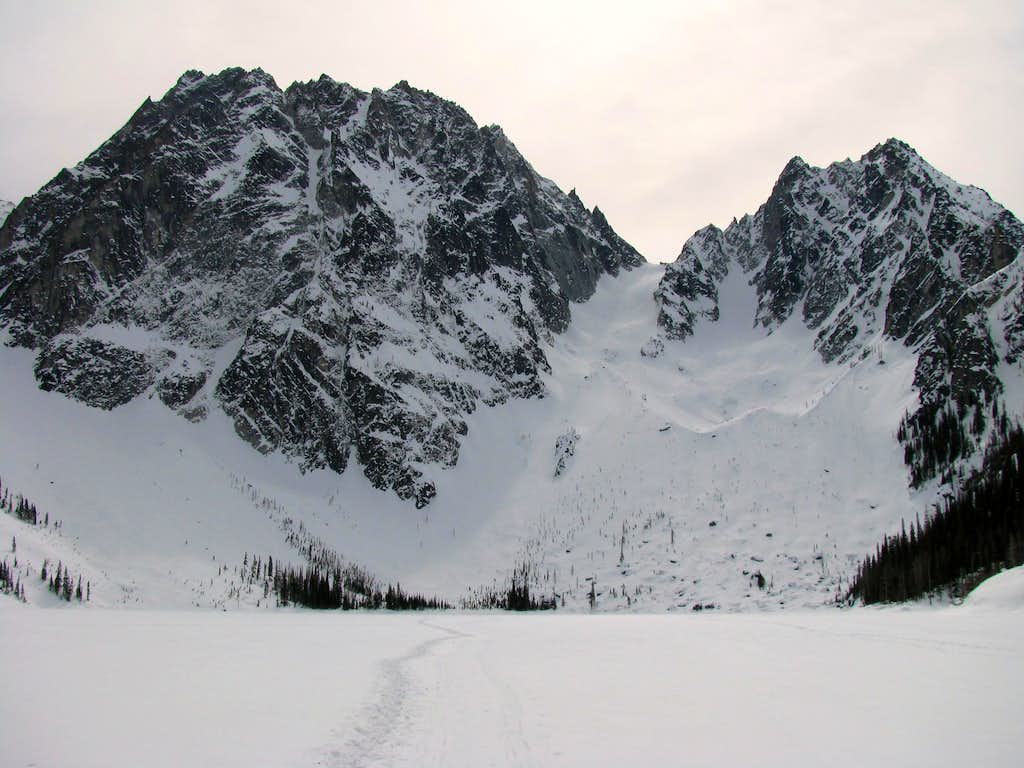 Well after an amazing winter for climbing, it is now springtime in the Cascades. Traditionally this is the start of snow-climbing season here although this snow-climbing season started much earlier due to a much warmer than usual winter. The weather window was set and the weather on the Eastern side the Cascades were going to be better than the western side of the Cascades. I was flirting with the idea of redoing Eldorado but after looking at the weather I decided to join on in a trip with Dave (mtn.climber) and his son.

I invited Mike Lewis and Colin (RokisGud on cascadeclimbers.com and nwhikers.net) for this trip. Dave and his son were going to leave early heading up to Colchuck and we were going to meet him up there about 2 pm at Colchuck Lake. From there we were going to all head for the summit and then head back to camp down at the lake and camp the night before heading out the next day.

The Trip Up Colchuck Lake

Colin, Mike Lewis and I reached the road leading to the trailhead around 9 am. The road itself is gated off this time of year meaning that we had to go up the road 4 miles to the Stuart Lake trailhead. Though it was long getting to the trailhead the road up was quiet scenic but it also had a couple of icy patches on it making for some slipping and sliding. I made the mistake of bringing plastics on this trip and early on I was regretting this decision. Once we hit steady snow it was quick moving up the road to the trailhead. Just before we got to the trailhead we got a quick view of our destination, Colchuck.

Then came the Stuart Lake Trail. At roughly 10:30 am this trail was incredibly icy. Had I had my normal shoes it would have been easy because all I would have needed were micro-spikes and I would have been all set. Unfortunately though I had plastics on and the icy trail was a real pain for me in the beginning. My friends were very patient with me here but I know these shoes were REALLY slowing me down here. The ice here wasn't helping at all and it was making this trip up hard.

By the time I reached camp across the Lake I was extremely tired and fatigue. I found out when I reached camp Mike Lewis was suffering but Colin was in great shape to go for the summit. Dave and his son had headed to the summit earlier than 2 pm due to weather potentially moving in. So we urged Colin to go for it at lunch and we were going to sit back and wait for morning. Colin gave us both a Zip-Fizz and than headed for the summit.

Guess what!! We are heading to the summit 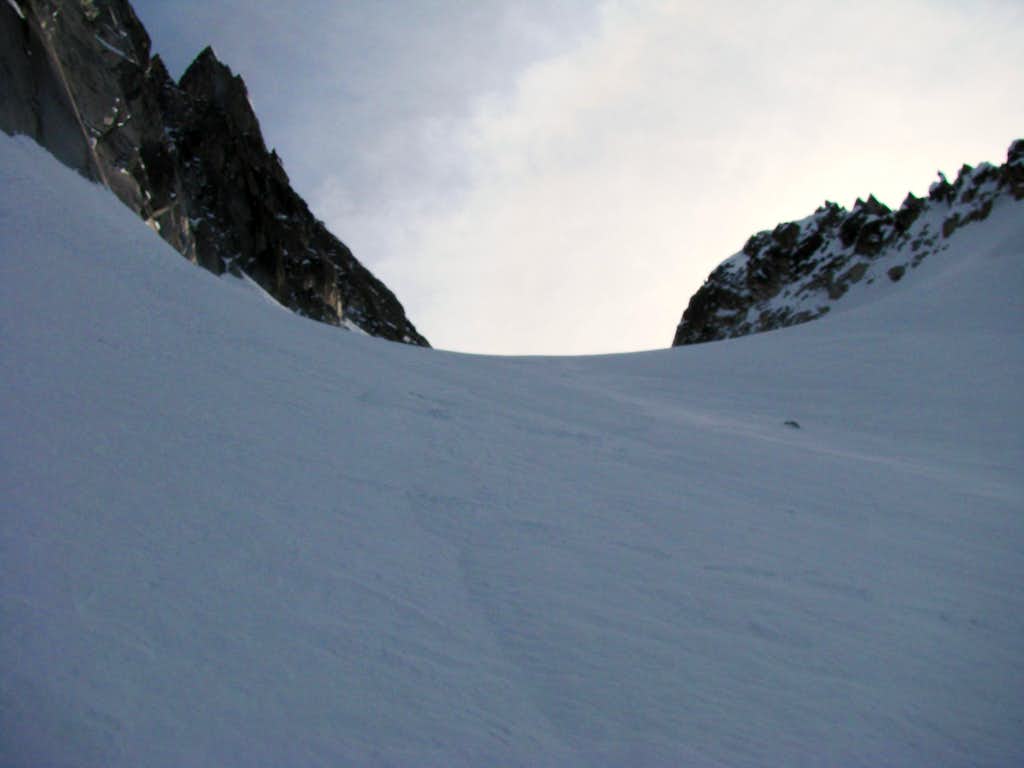 Heading up to the Gap

After thirty minutes of talking and taking a long rest Mike Lewis and I had second thought about staying back. Both of knew it was now because the weather was going to crappy later that night. Maybe it was Colin's ZipFizz or maybe it was the rest we had but we changed our minds and went for it.

It was time to for Colchuck. Heading up the steep slopes to the moraine was tough but not nearly as hard as other parts of the journey up. Jimbopo and I took or time going up and both of us brought two headlamps for descent so we were not going to rush here. 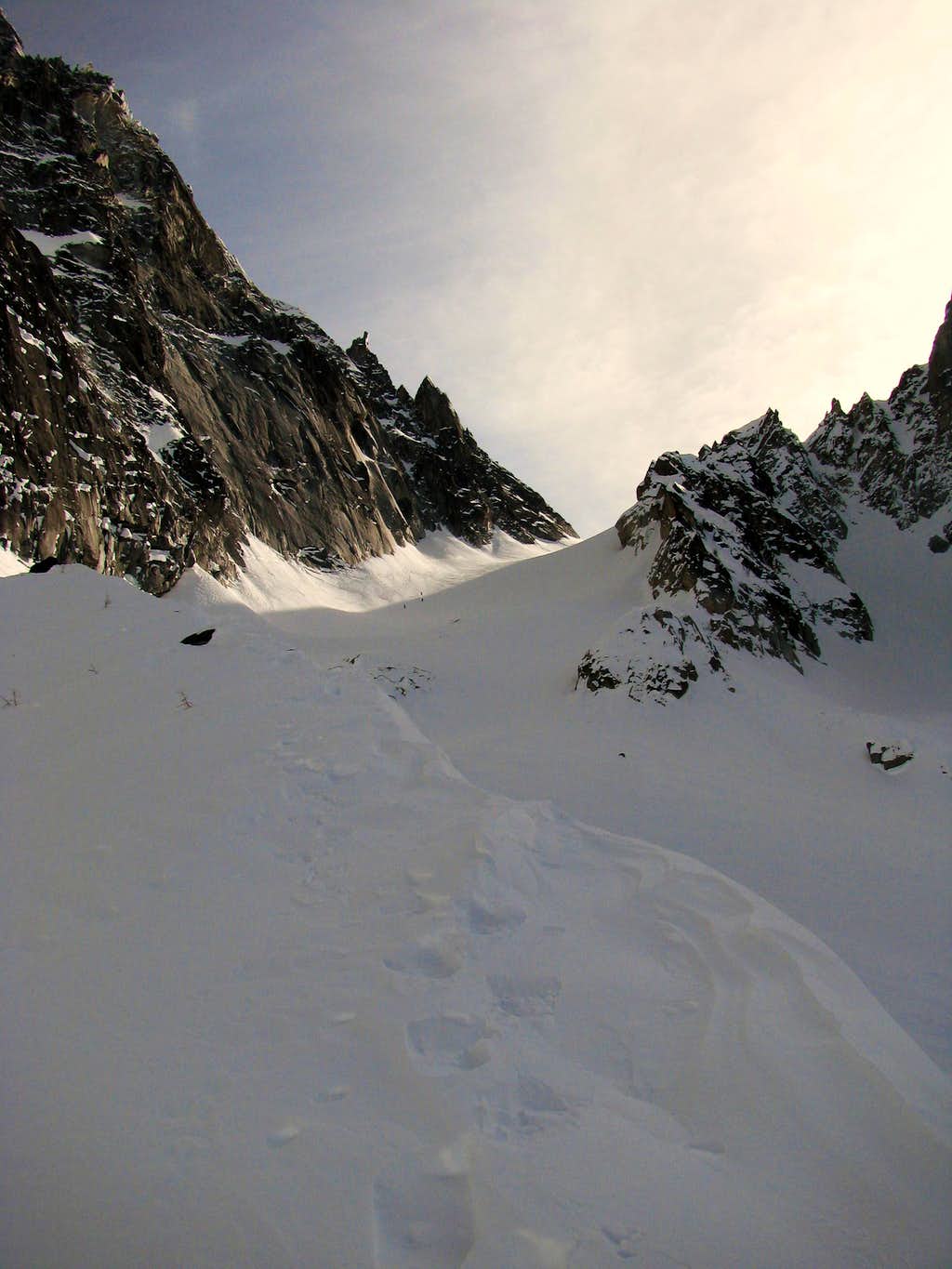 On the Colchuck Glacier

Slowly but surely we picked our way up the mountain to the glacier (not crevasses at all in winter so no reason to rope up) where we put on our crampons and headed up the glacier to the col. It actually was getting easier for us the higher we went up. What looked like an impossibility was slowly becoming a reality on the way up. The angle of the glacier was never over 40 degrees and we taking good steps to the col. We ran into Dave and his son right around the col and Colin who summited just after the col. All were very happy to see us heading up. 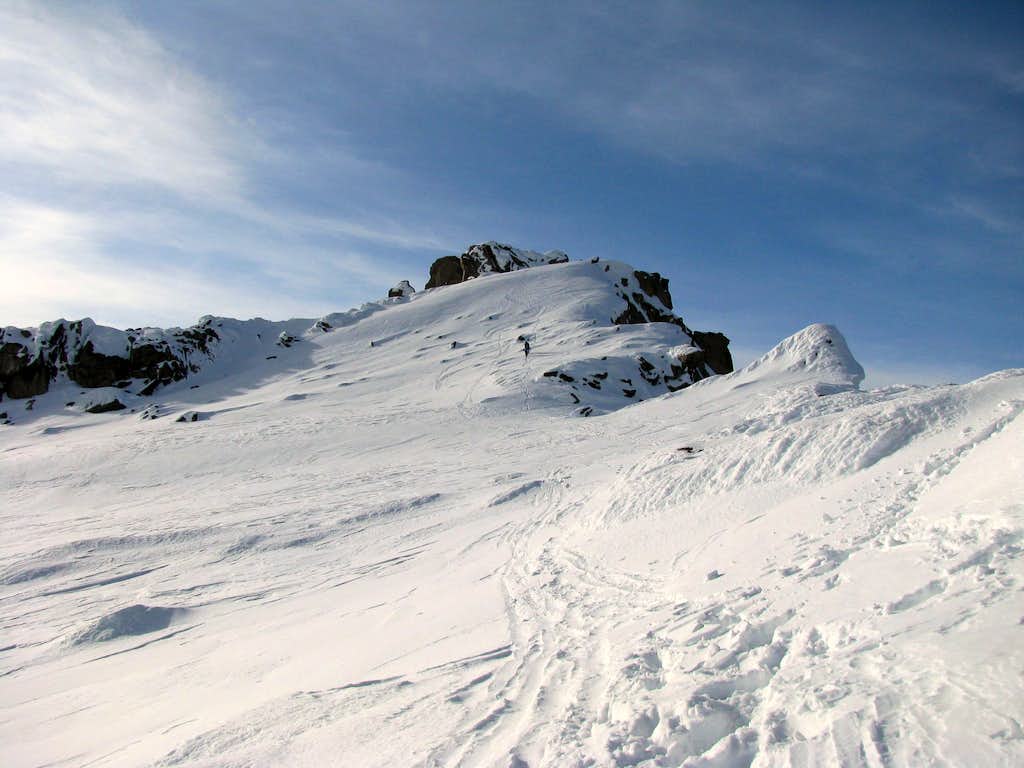 The final section to the summit

After talking very shortly we decided to head up the short crux to the summit ridge. Luckily it was mostly a snow climb here instead of a Class 3 scramble like it traditionally is in summer. Though we were tired we had decent foothold and just as the sun was setting we were summiting Colchuck. I was never more happy to be looking at Mt. Stuart from our vantage point.

Yeah we did it

It was tiring, exhausting and EPIC but without a doubt it was WELL WORTH THE EFFORT! Rainier, Glacier Peak capped of the views of literally thousands of snowcapped summits. We watched the sun setting behind what looked like some storm clouds and took ten minutes to enjoy the incredible views from the summit. 6800 feet elevation gain on snow is not easy but we were now here to enjoy the amazing views from the summit. Stuart was to the west and Dragontail was to the east. Hopefully soon I will have my chance with them both. Time was running out on sunlight so we only spent a little time up there but this summit will be something that I will never forget. And the views from Colchuck at this time of year are amazing. I was so happy to get to the summit but down it was time to head down and we were only halfway done. 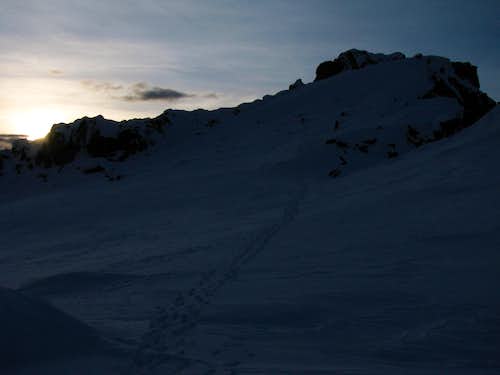 Once past the small summit block (which reminded us that there was a 2000 foot drop-off to the north!!) we headed down first the over the gentle semi-plateau section of Colchuck to the crux. The snow was beginning to freeze but the plastics which I was dreading for so long was able to kick right through it Jimbopo and I stayed very close together until we reached the col.

Once we hit the col the sun was completely down and both Jimbopo and I were concerned about doing a fast glissade down to the camp. So at first we took our time until we saw some clear glissade tracks. At this point it was time to take off the crampons and let it rip. I here this is the best glissade in Washington and I wanted to give it a shot. That being said we both did two self-arrest practices to test the snow. It was in great shape and it looked ready to ride.

So about 500 feet from the col we started a number of very well controlled glissades down the glacier. We kept it slow in order to make sure we did not cliff out or get out of control. Both of us also capitalized on the glissade zone to take a couple practice self arrest. Control was very important but it was quiet amazing to watch Lake Colchuck get closer and closer as we continued to glissade down this glacier. Also we could headlamps from the camps below us and the moon which had just risen above Colchuck. We continue the trip down to the lake and though it took a little longer for us that those in the daytime it will be an experience that I will never forget. Less than forty minutes after entering the col we were at the bottom and back at camp. The experience though will stay with me for a long time. 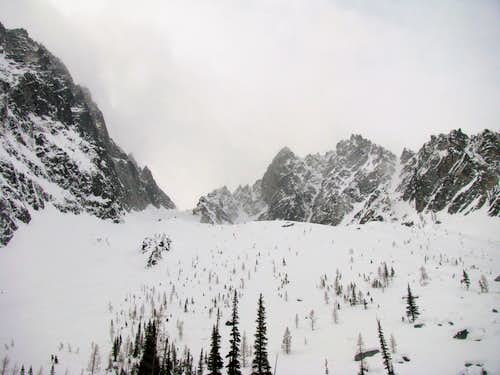 Storm the morning after

Well after we went to sleep the weather took a change for the worst. That it was very windy with a wind speed at least forty miles per hour. Our tent was luckily reinforced with trekking poles and ice axes so it withstood the worse. Plus with us three in there the tent wasn't going anywhere. That being said, it was a rough night to get much sleep. Often you could hear the wind just howling at the tent and occasionally you could hear snow hitting the tent as well. It was amazing to hear how quickly the weather could change in such a short while. Somehow we managed some sleep but the instinct were right had we not gone for the summit of Colchuck when we did our chance would have been lost!

Time to backpack out 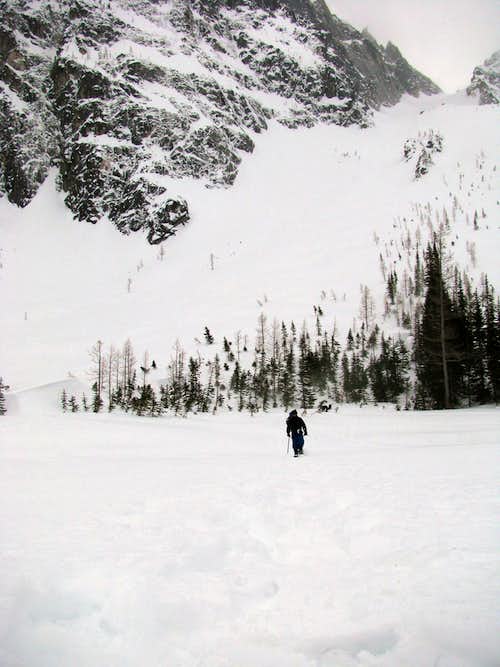 The weather on the way down though gradually improved. In fact the wind died down dramatically and the weather actually cleared up for awhile. At times we were in the sun which actually softening up some of the icy areas on the way up. Heading down the Colchuck Lake trail was actually not bad at all but the Stuart Lake trail with its ups and down was become a real problem for us. It was very neat though going over the snow-covered bridge. It was king of like traversing a knife-edge with a step in either direct with the same result. That being said outside of the ups and down this section was uneventful as was the 4 mile trip down the road to the car. We did get hit with a rain shower on the way back but overall the trip back to the car, though painful for me was uneventful.

I want to thank Dave for the invitation on the trip . I wished that I got to spend more time with but am glad that we at least meet and talked for a bit. I also want to thank Colin and Jimbopo for coming on the trip and making a number of very smart decisions while on this trip. You were great coming and I look forward to MANY more hikes/climbs with you. I have also learned that I am going to get a better mountaineering boot and save my plastics for Rainier, Denali, etc. I am feeling the pain of those two nasty blisters and will keep that in mind the next time I am making my decisions in the mountains. Another awesome trip on what is becoming an amazing year.

I had a blast! Thanks for the invite, the climb and the company. I look forward to more!

Re: A Great Trip!

There will be many more! You are a great climbing partner. I look forward to many more trips with you.

"...for coming on the trip and making a number of very smart decisions..."

I appreciate that EK.

Much thanks Collin for driving, leading and good conversations.

No problem bro! Glad to have you on this trip. Hope to see you on the next advnture!

But there is no Solstice in March. ;-)

Opps-Equinox! Correction noted. We summited at 7 pm and got to camp at 8:30.

Good time coming down the mountain. How good was the glissade? Did the glissade compare to any others you have done?

Thank you very much! The glissade was great even at night. We had to use caution on the way down so we had to control the speed. The slope and the angle though is perfect for a long glissade. In fact I would climb it again just for that glissade. Even with the control factors in place, it is easily the best glissade I have ever done!

And excellent photos to go with it!
Cheers,
Eric

Thank you very much! This trip was a true classic!