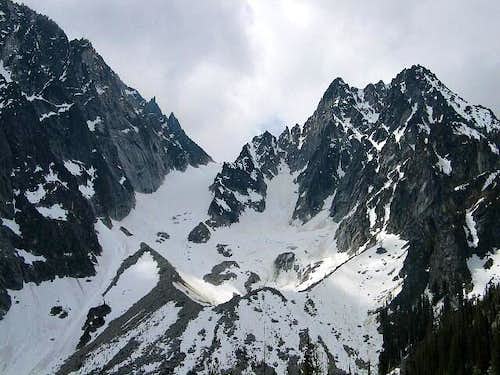 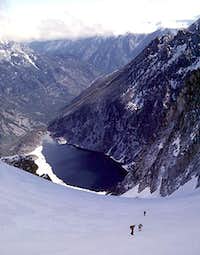 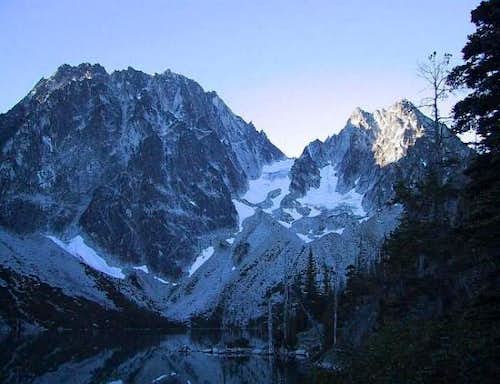 This route is easiest, most popular and most often climbed on the peak as witnessed by the number of summit log entries here.

Beckey calls this route as the "East Route" in his climbing guide but the most common name and what is immediately recognized by nearly all northwest climbers is the Colchuck Glacier Route.

Both this route and an approach from Ingalls Creek to the south reach the col between Colchuck and Dragontail and from there follow the easy slopes above to the summit.

Note that this route is best done in early to mid-season. Later in the summer, the glacier turns to bare ice and can be quite difficult.

With snow cover on the glacier, it is an easy 3 to 4 hour undertaking from a camp at Colchuck Lake, or can be done in a day from the trailhead.

This was the route used on the first ascent of the peak August 11, 1948 by Elvin R. and Norma Johnson, along with William A., and Kathy Long.

Reach Colchuck Lake as per the main page. (About 4 miles of trail).

Colchuck Glacier is visible from the lake and easily reached over talus or snow depending on the season.
(less than a quarter mile) 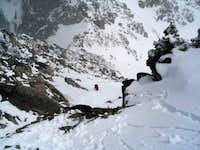 Route above the col in May

The route is very straight forward.

Ascend the glacier to the col between Dragontail and Colchuck.. There are few if any crevasses especially early in the season.

From the col it is an easy scramble or snow climb to the summit depending on the season. There are several high points with the western most being the true summit.

See images below for many more climbing photos.

Ice ax and crampons. Crampons may or may not be needed depending on conditions.