I had a five page paper to write on Kierkegaard, Ryan had just gotten a nasty cold, and Chandler finally felt he was strong enough to try for his first glacier climb after breaking both his ankles at the Index Town Walls a couple years ago, so naturally we headed out late Friday night to climb the Coleman Headwall on Mount Baker. We had also hoped to snatch up one of the ice routes on the north face of Colfax Peak, but found them to be woefully out of condition. The climb went well and we summited at noon on Saturday, and by midafternoon we had decided to hike back to the trailhead that day. That was when I made a mistake that landed me in Harborview, but more on that later. 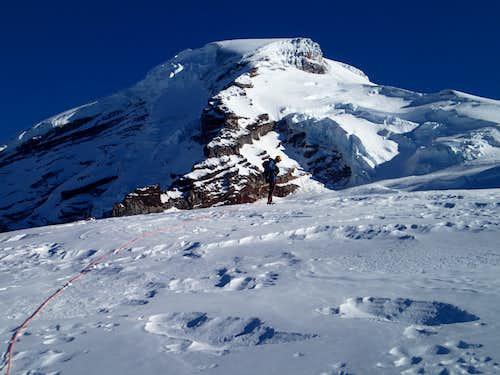 Headwall in the shade on the left

Ryan got off of work at 2pm so we met at his house shortly thereafter, piled into the Subaru, and headed north. I had hoped to at least start the hike in the daylight, but as it turned out we did the entire approach by headlamp, arriving at the Hogsback around 8pm. With our fortress of a tent assembled and our alarms set for 3am we settled into our sleeping bags and melted water until all our canteens were topped off. I actually slept reasonably well and woke at 3 feeling better than usual, as we started to hike over the dark glacier however, my usual half-asleep doze-march set in.

Ryan and I arrived at the base of the Coleman Headwall around first light, the maneuvering though the more broken sections of the glacier being facilitated by the crevasses being largely filled with snow. The route itself alternated between exposed glacial ice and consolidated snow, the first band of ice went at around AI3+ and the second, because we missed the easier way up the center for fear of topping out on a serac, at AI5. From that point we traversed up and right to escape from under the summit ice cliffs, this was initially quite pleasant neve but included a long section of rather horrible low angle ice filled with pumice. Eventually we found ourselves on the wind-sculptured snow of the summit plateau and after a brief jaunt over to the true summit we headed down the Roman Wall.

Descending the Coleman-Demming went well, I had done the route before and it was cear that someone had been up it within the last week. If there was a direct way down to our camp we missed it and wound up traversing far to the climber’s left, but regardless by midafternoon we were safely down and packing up our gear. 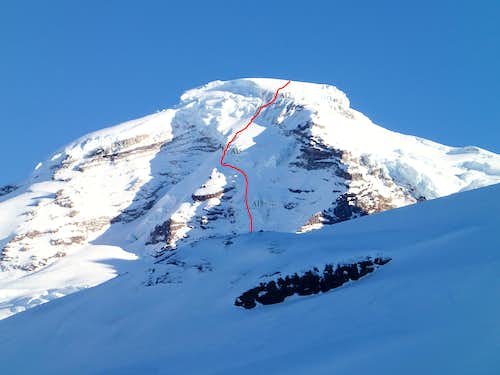 As we were preparing to leave I scoffed at Ryan and Chandler for putting on their crampons and started the hike down without them, assuming that if I had made it up the previous evening without them I could surely make it down during the afternoon. Around halfway to the Heliotrope Ridge trail, a couple minutes after I began to realize exactly how stupid I was being, I lost my footing, slid around 200 feet, and collided with a tree, resulting, I found out later, in seven fractured ribs and a punctured lung lining (pneumothorax). It turns out that executing a self-arrest on a 40 degree snice slope with a trekking pole with a broken tip and no crampons doesn’t actually work, at all.

Initially I didn’t feel that bad, my back felt screwed up and my breathing was shallow but my legs and arms seemed to be working fine and we thought I would be able to hike out. Ryan and Chandler rigged a couple trekking poles to carry my pack between them and I followed, very slowly behind. After about half a mile this became untenable. My breath was so shallow that constant motion was making me feel faint and see lights; it was a hard decision to justify at the time, but I simply felt too weak to continue downward for another 6-8 hours and so around 6:30 I hit the 911 button on my SPOT. After a couple minutes of sitting down the decision to remain immobile was actually made for me, as the muscles in my back seized up and I was unable to do as much as roll over for another twenty four hours.

The first group of search and rescue folks arrived about 1:30am that night and determined pretty quickly that my lung was likely punctured and that I would therefore be needing a helicopter evacuation. Because of the dense fog in the valley this ended up taking until 12 the next day to arrive. I wasn’t in an unbearable amount of pain but the shear helplessness of lying strapped down in a stretcher waiting to get word that the helicopter had taken off was among the more tortuous experiences I can recall.

My thanks goes out to the navy medics and the mountain rescue volunteers who answered our call, their good humor and professionalism made the whole experience much more bearable, and, of course, Ryan and Chandler, to whom I owe a pretty serious amount of beer.

I cannot emphasize enough how unrelated these two aspects of the trip were, the climb was magnificent, among the best I have ever done – the injury was an idiotic mistake that could easily have been avoided and had nothing to do with the intensity of our previous efforts. The biggest lesson that I’ve learned is something I’ve known to some degree for awhile, that any time I am persisting in something not because I think I am right but because I don’t want to admit to being wrong, I am being a moron and need to stop immediately.

I have had one of those...they suck ass. Glad you are ok

yeah, i just got home today but i still have a tube in my side because when they took the first one out it came back.
The doctor was like, if you were 85 we would just say fuck it and send you home but at your age you really don't want to have 75% lung capacity for the rest of your life.

I hope you feel better bro!!

Take care and rest up! It sounded pretty bad but thankfully you survived this fall. At least you did get an awesome climb in and you lived to tell about. I wish you a speedy recovery.

Is the best way forward. Wishing you a solid recovery.

Praying for your fast recovery!

Try to lay off the stand up comedy while those ribs are healing, and hope to God you don't get this cold (Yes, I still have it). I don't know what would be worst, coughing or laughing!

Probably dodged the bullet on the cold, although my dad has one too so we'll see. I'm just praying i don't get one of my infamous multi-day cases of the hiccups.
I'm on a fair amount of oxycontin at the moment but once I'm off I'd like to take you and Chandler out for a drink, maybe sometime next week?

Hey Ryan I am coming back to WA soon if you wanna climb something.
Hope you stay healthy Jacob...man the hiccups would really suck.

I caught a sickness yesterday. Fortunately it's only a sore throat so far.

Glad you're ok. Thanks for sharing.