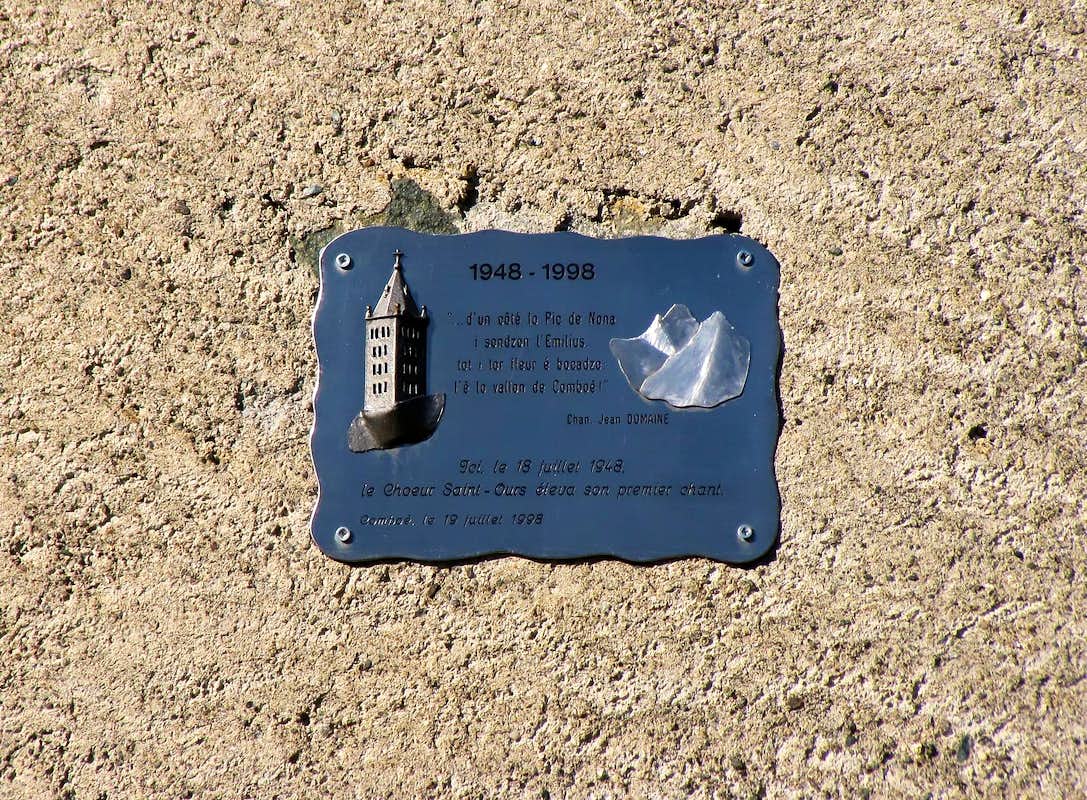 Comboé or Combuì? Tous les deux, ie both. Comboé a little more Frenchified, Combuì in the local idiom. Like the other Combuì that exists at the entrance of the Vallon of Arpisson, above the Common of Pollein. But of Combe, Bellecombe, Comba and Combette is filled throughout the Valley of Aosta valley and means more or less large, more or less good, more or less known. So say the Vallon of Comboé is wrong and consists of unnecessary repetition, because Comboé or Combuì already means little valley. Usually solitary and secluded, and sometimes well hidden. An exclusive for the locals that there are a place to escape taking cover from prying eyes. Under high and rugged mountains. This vallon almost a real valley, which, sinuous flowing first South, then to the West to fold forming a great arc toward the North, originates more in below to Comboé's Vallon and Gorge of Dard (Waterfall Ravine), all crossed from the same waters or Torrent de Comboé up to the Dora Baltea, in turn, can be identified in three well distinct parts: 1)- the lower area from Dard's Gorge that flexing in South-southwest reaches progressively the Low Comboé, Combé and Grand Plan to the Arbolle's Gorge. 2)- the mid-central zone (here in the photo below) that reaches the Plan de Valé via a steep branch Eastward towards the Mount Emilius (3559m). 3)- yhe upper part towards the Becca di Nona (3142m), and the Mont Ròss de Comboé (3301m), highest elevation of this little area. 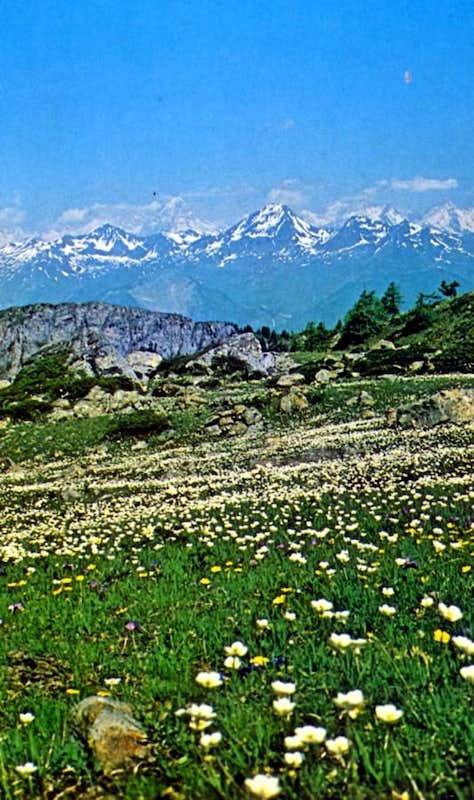 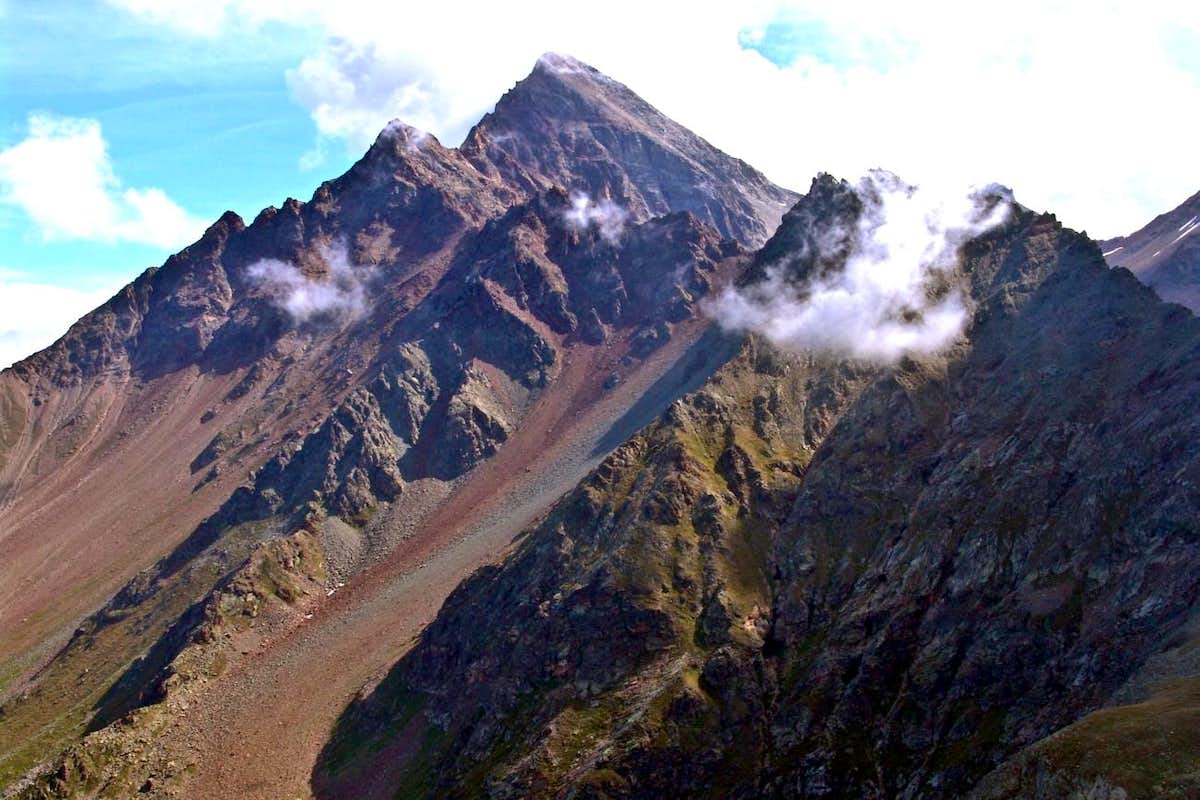 From this precise point the vallon begins itself into the major upper part, by emilius 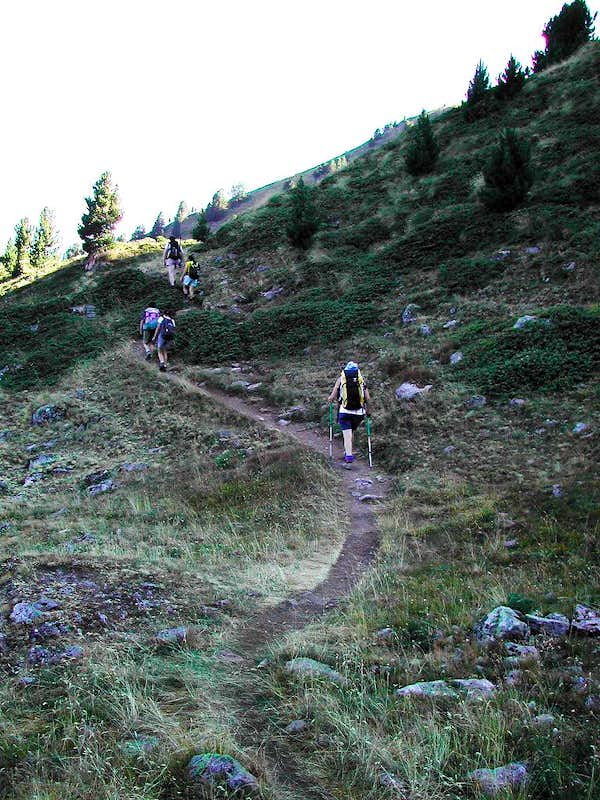 Seven trips to suit all tastes ... 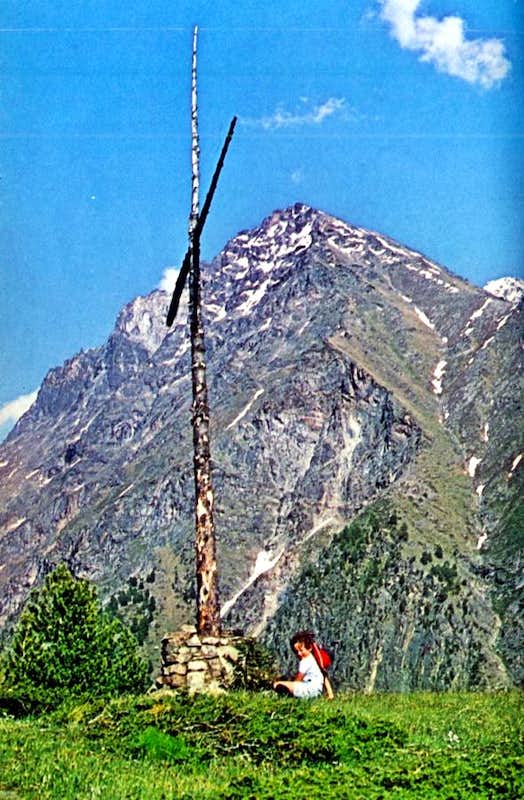 Pointe de Ponteilles near Plan Fenêtre, by Osw
Starting from the Northwest, at the entrance of the Vallon, and continuing counterclockwise. Starting from Comboé not expect you to find great climbing, but lovely walks and excursions yes. Although, to be fair, the Comboé in the past is resulted as crucial passage for climbs very challenging routes like the West Ridge-northwest of Emilius, before it became "Via Ferrata", the North Wall of the same, and yet, at the beginning the Sixties, the conquest of the fearsome Black Triangle. Or, starting from "Low Comboé" and towards the Morion promontory the North Face on the "Becca". But they are climbings concerning a more or less distant time, although later were opened on the same repetitions, new routes and important winter ascents. Or exploration of what little that the territory could still offer. Nothing particularly interesting, but can still propose some regurgitation in search of adventure. But this is not the primary objective, starting today from Comboé, but is to advise a small number of trips made to suit all tastes, always in relation to their skills, capacity and degree of training. Then a proposal aimed at everyone from big to little ones, and on the footsteps of those who, like the Canon Georges Carrel or the Abbot Joseph Henry, loved and explored these rough and ancient mountains; or as simple shepherds who lived together with their livestock seeking a source of sussistanza in this valley. Not least those who have tried in this place, so close to town and yet secluded, peace for reflection or the rest of the summer holidays. Moreover the "Choir of St. Orso", this here since 1948 and always nice to meet after a long and tiring ascent. Among these seven indicated proposals, choose the one that suits you the most; except that you can still make choices completely different ... 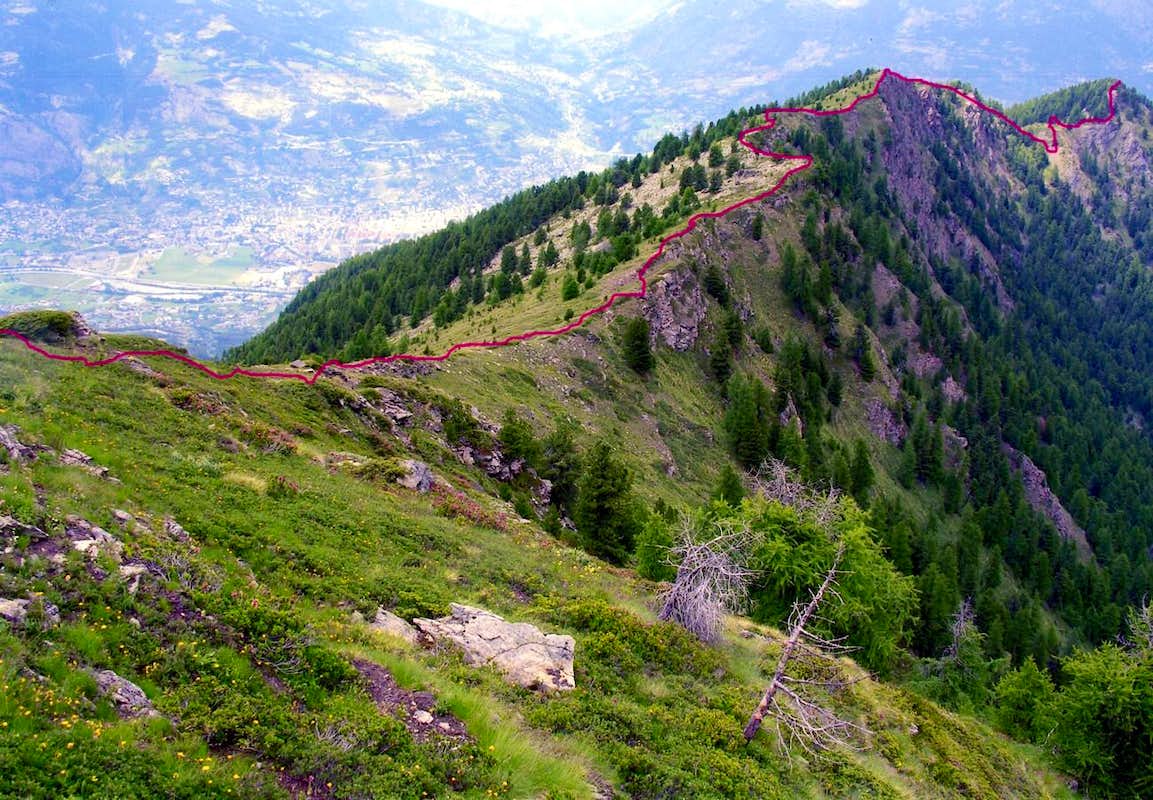 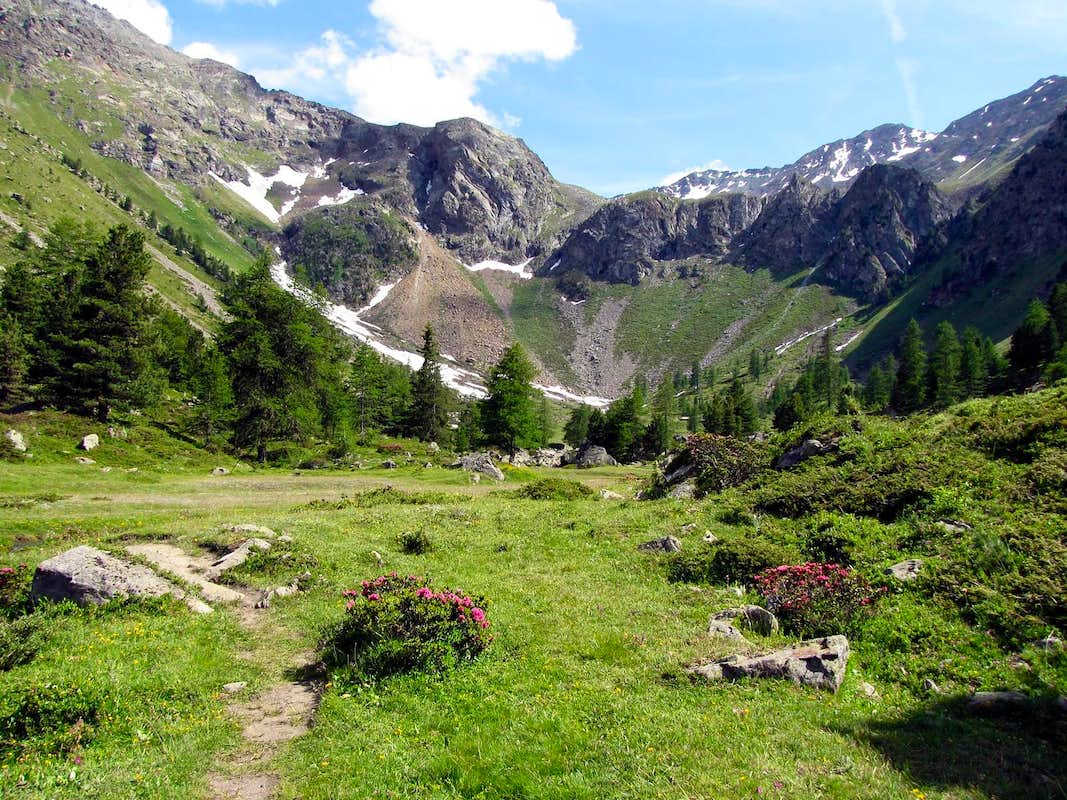 Comboé/Arbolle Gorge an ancient passages between two vallons, by Antonio
3)- Adventurous trip by Comboé towards Arbolle climbing into a Gorge: (2219m, 2500m) through path not numbered, after in South through path n° 16 reaching the ancient Grand Plan Alp in ruins (2158m) and after by small path into moraines towards the narrow Arbolle Gorge up to the Arbolle Refuge (2516m) (EE/F+; 1h'30/2h'00). This hike along the old path for transferring steers at upper valley; it is easy but exposed to falling rocks while in winter is very delicate for the oftentime verglass phenomena. 4)- Mixed climbing on Punte del Lago Gelato (3115m) by West-northwest Eperon: after a partial approach through path n° 16 and crossing South the wide and reddish moraines, enough easy climbing through West-northwest Eperon above Plan Valé (A/PD-/PD+; 4h'30/5h'00). This climb has a fascinating significance until the month of June, when the snow covers the sides of the éperon then lost value in midsummer. If traveled on the edge of the ridge also presents passages of III/III°+, otherwise it requires the delicate circumvented on snowy slopes up to 50°/60°. Better to make the descent via the South Ridge to the Col de Comboé (3014m) and then back, through a steep reddish-brownish moraines, to the West towards the path diagonally n° 16 from Grand Plan Alpage (2158m) at the end of vallon. From this (yellow signals) return to Comboé Pastures. 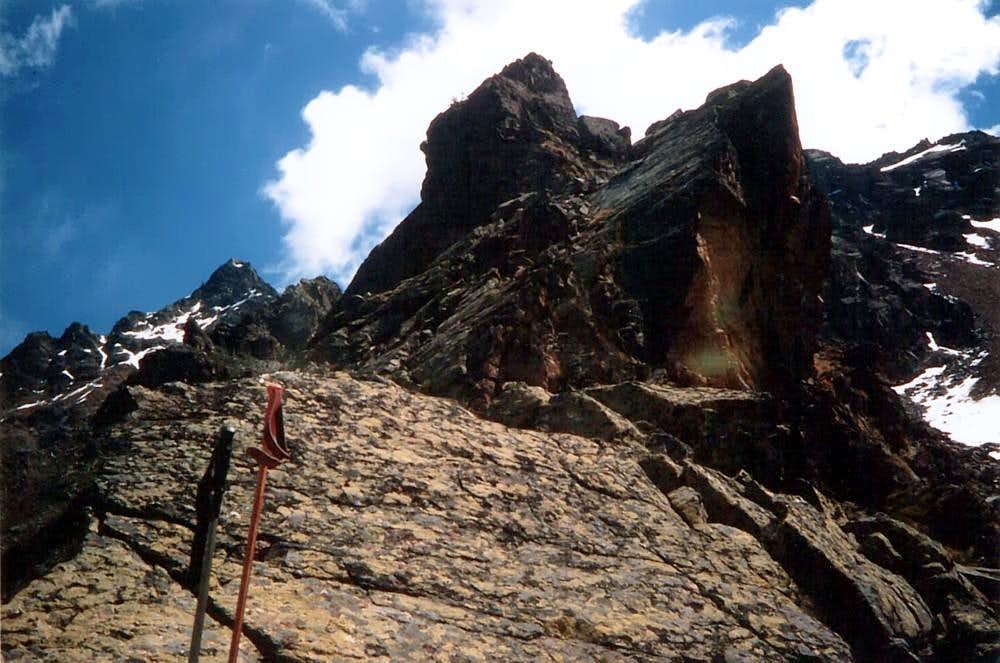 On West-northwest Eperon Punte del Lago Gelato, nearby the Col Ròss, by Osw
5)- Inhabituel traverse from Plan Valé, Gros Scez fork on Col Ròss towards Boulders and Gelato Lakes (2379m, 2526m, 3091m, 2943, 2957m): excursion-climbing from Comboé with path n° 16 before in East up to the alternative near the squared boulder called Gros Scez, after through progressively steep moraines pathless up to Col Ròss and following descent towards the wo lakes, now in Arbolle Vallon (E/F; 4h'00/4h'30). This crossing is quite unusual and was done very rarely in the end of the '800 to return from Emilius at Comboé avoiding the wide circle of Arbolle. The offer in the opposite direction, however, noting that it should be carried out before the avalanche descends from the Col Ròss (second half of June) and in any case even better in the presence of hard snow. Otherwise it is boring and too exposed to falling rocks from the overhanging Western Face of Mont Ròss de Comboé. Ascent is not difficult and suitable for good mountains inhabitants, connoisseurs of the snows state. Better if equipped with crampons. Descent on the other side is elementary and you may want to return using the same route. Otherwise go around the Vallon Arbolle and down through the Gorge. 6)- Classic excursion towards Carrel Hill, Federigo Zullo Bivouac and "Via Ferrata" to Monte Emilius (2912m, 2907m, 3559m): excursion-climbing from hill on Northwest Ridge of Mont Ròss de Comboé (3301m) with subsequent traverse towards the Little Emilius and Mount Emilius through the Western Ridge (3342m, 3559m) (A/PD-/PD+; 6h'30/7h'00). This crossing takes place at high altitudes and requires equipment and physical preparation, although since 2004 the via was completely (even overly) furnished. It replaces the old route that, without these measures, very little was covered and it was exclusively reserved for Experts. Lately there have been several detachments of rock, for which reason it is best to take a priori informations. Anyway fascinating climb with breathtaking views above the underlying and impressive North Wall. 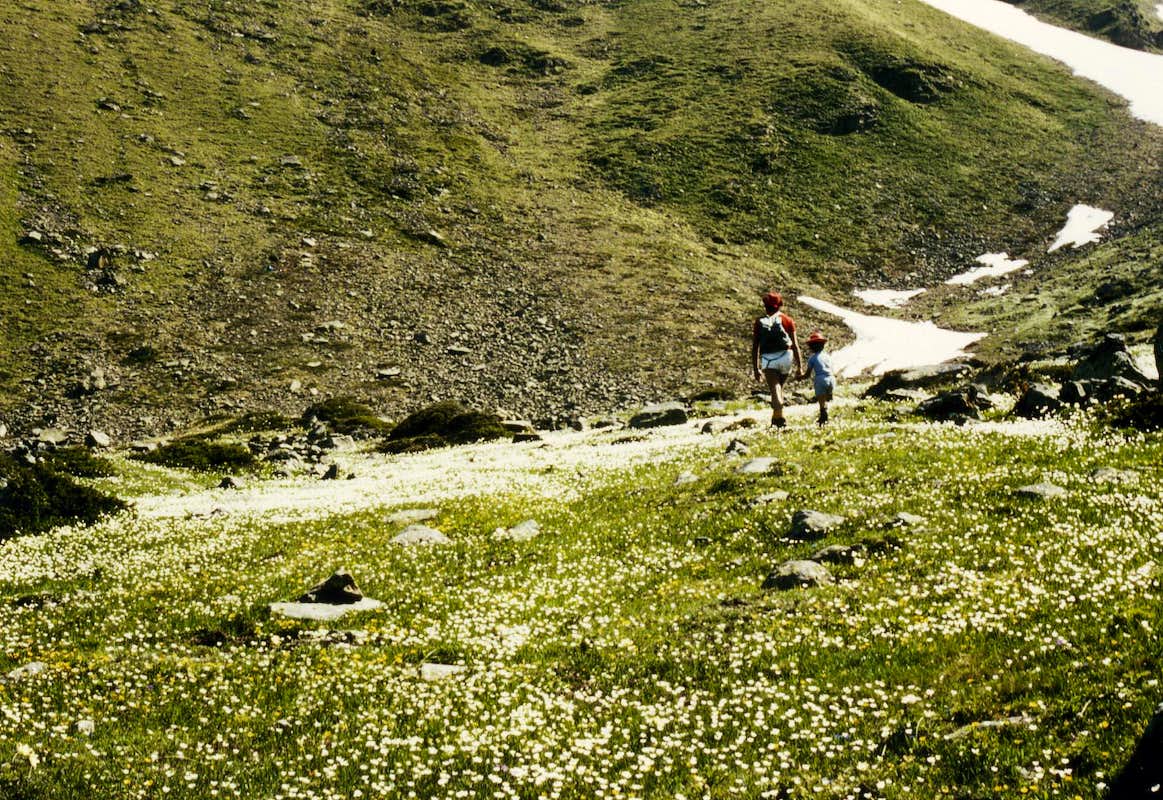 From Plan Valé towards the fork of Gros Scez, by Giorgio Fruttaz
7)- Traditional excursion on Becca di Nona from Plan Valé (2340, 3142m): excursion from Comboé with trail n° 16 before in East, after in Northeast with path n° 16A to Southern Slope of Carrel Hill and small not numberded path-track on South-southeast Crest in terminal part (E/F; 3h'00/3h'30). This route, which also serves as approaching the "Via Ferrata", can be replaced by one further West via the mule track n° 16 from the junction nearby Gros Scez climbs the Slope South-southwest. An old path built specifically for the installation of large (5 metres) bronze statue of the Madonna, which took place on Sept. 12th, 1892. More fun with this last rise and downhill with other. 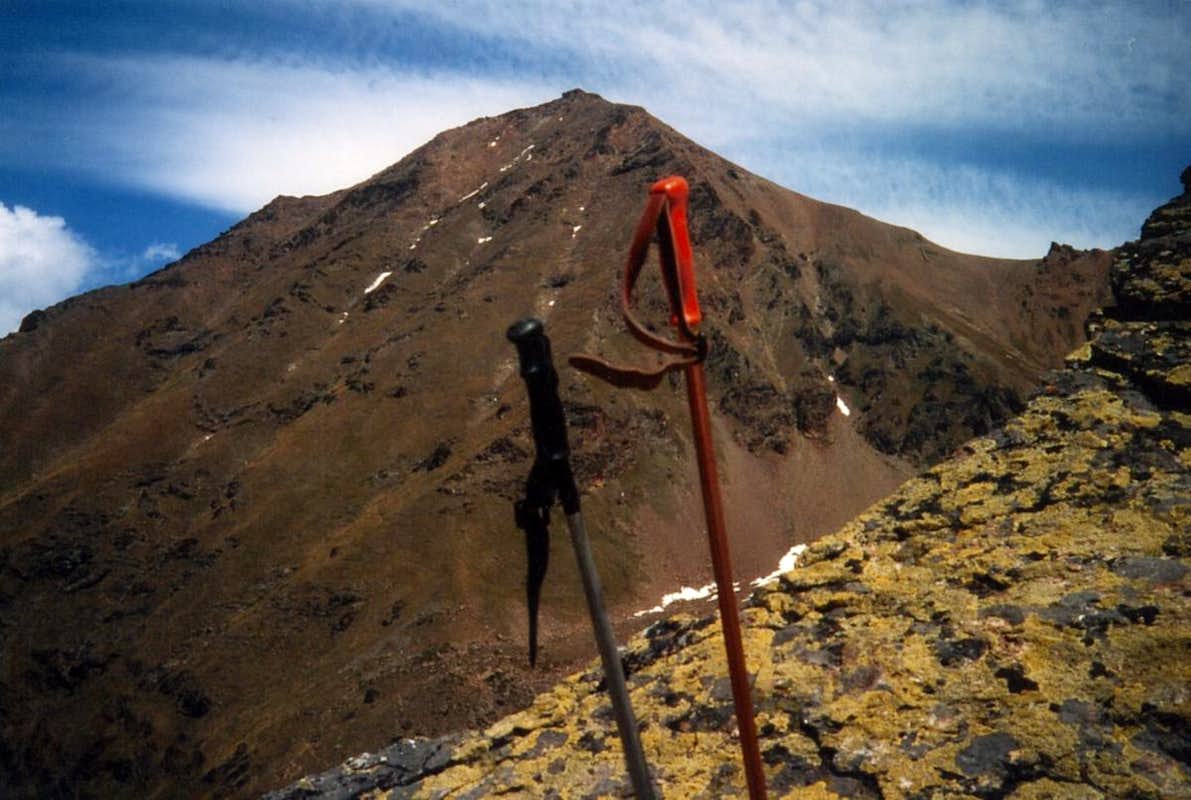 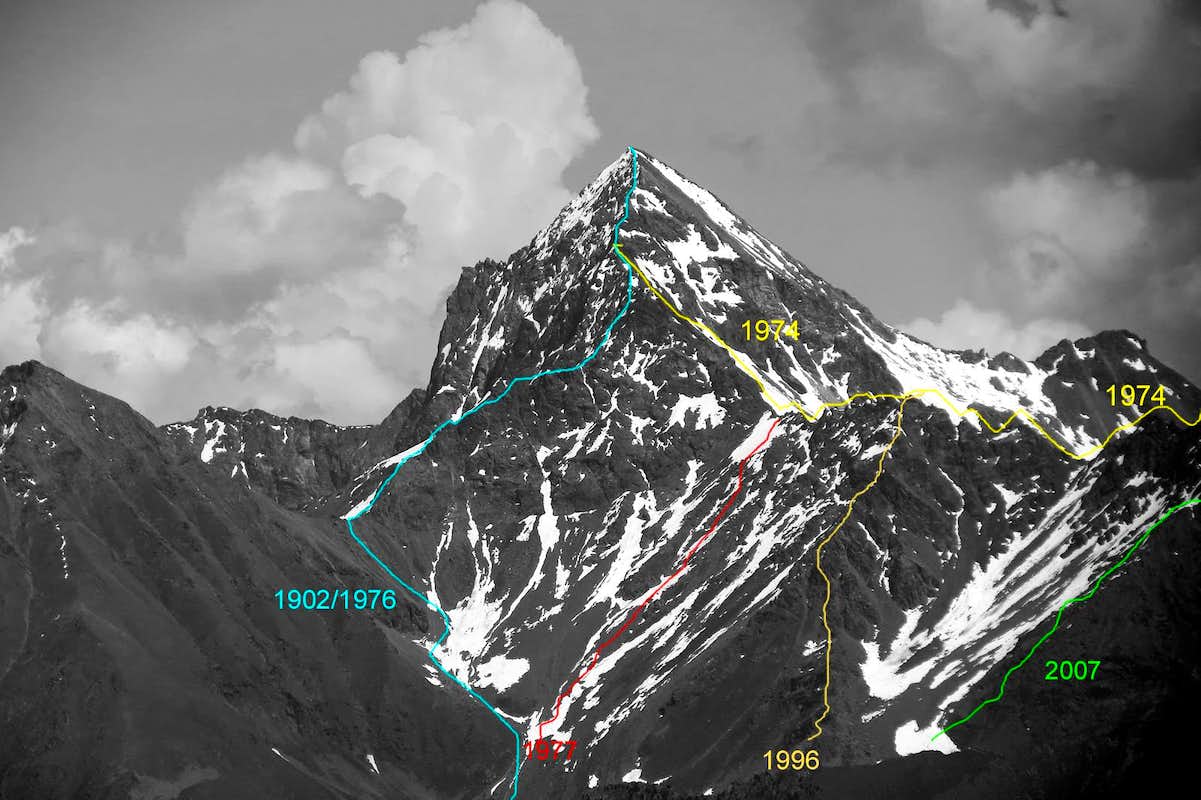 Monte Emilius (3559m) Western extremities above the Comboé, by Antonio