Cone Peak is a rocky tower in the Sierra Nevada mountains just east of I-80 near the California/Nevada state line. Many travelers see this rock tower while driving east or west on I-80, but few ever actually visit. Cone Peak does not have much prominence, only about 86’ in fact. But it merits its own page as a prominent landmark seen by many thousands of travelers each day.  Cone Peak has dramatic beauty and contrasts with the surrounding landscape, made up mostly of forest and brush, and an endless series of plateaus that make up the northern Carson Range. 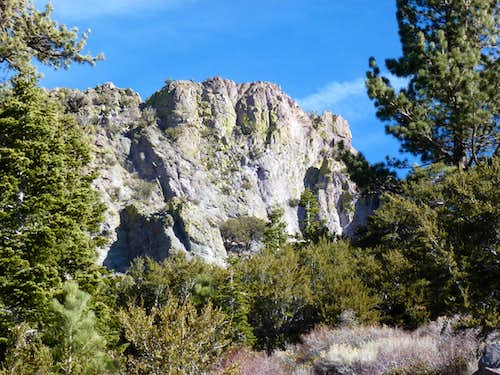 Cone Peak offers a great day hike that allows for a nice walk through the woods, with pretty views en route, capped by a fun rock scramble with varying degrees of difficulty - from Class 2 to Class 3. There are no summits that can serve as doubles on this hike. Cone Peak is the only real destination. The nearest summits in view are the Verdi Ridge area, with Verdi Peak 8,444' and Ladybug Peak 8380' just to the west; and the desert-like Peavine Peak 8266' to the northeast. Typically this area is best hiked in fall before first snowfall. It is far better to hike here when it is dry, which is why October/November is probably the best time. We hiked on January 2nd, 2012 in 60 degree+ weather in what has followed perhaps the driest December on record in this region. Normally these roads are covered in snow at this time.

There are two options.  There's the main route for 2WD and the 4WD route.  For the 2WD route, head to Verdi, Nevada on I-80 near the California State line. Get off at Exit 3 and head south on CO Road 136, also called South Verdi Road. South of I-80 the road crosses back on the west side of the train tracks. Continue south and the road becomes partially paved/partially dirt. 2 miles from the exit is parking, usually used for anglers fishing in the Truckee River. A dirt road crosses the train tracks and heads uphill. The elevation at the parking area is about 4950’.

For the 4WD route, drive to the Boomtown exit and get on the south side of I-80.  This can be confusing, but just go past the hotel and that will take you to the south side.  This is Garson Road.  Go past the fire station and the road gets sketchy really fast.  If starting at the base of Garson Road, it is over 8 miles to Cone Peak.  4WD can get pretty all the way to Cone Peak.  There is a turn off on the right towards Cone Peak about five miles up Garson Road.

The road generally switchbacks towards Cone Peak. Look at a Google Map, or Google Earth™ map prior to taking this trip. You will notice the general direction needed to travel. Fuller Lake will be encountered about 2 miles and 1150’ up the road. You need to head along the top side of the lake, passing an old cabin.  There are some signs indicating not to tresspass, but there is really nothing out there.  Just be respectful of the property and you should avoid any issues.  Plenty of people still hike up this way.

Soon after passing the cabin, take the road as it heads to the left, uphill. About ½ mile later you encounter another lake, which is often dry. So do not get confused. The road continues up and switchbacks towards Cone Peak. It ends at another junction, where you take a right and continue towards Cone Peak. At about 3 ¾ miles you cross under Cone Peak as the road exceeds 7,000’. There are two options.  You can go to the left side, which is an easy rock scramble; or pass to the right side of Cone Peak and find a spot to bushwhack through the woods.  In springtime, there might be too much brush, and you need to go up the left side.

Once at the rocks, there are multiple ways up. From the right side, I climbed it head on up a scree slope on its west face, which is Class 3. The easiest is the back side, which is its east face and Class 2. You can climb up the rocks from the left side Class 2 or Class 3.  Descend the back side and return to the road, preferably the way you came up from the road. 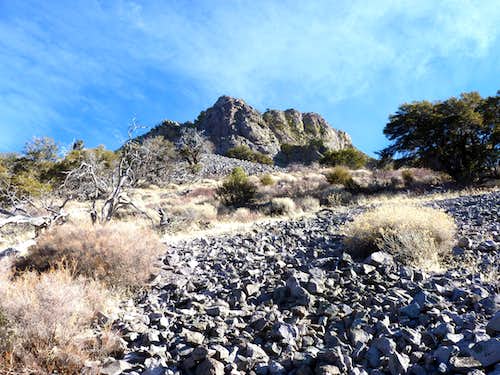 Scree slope up the west face of Cone Peak 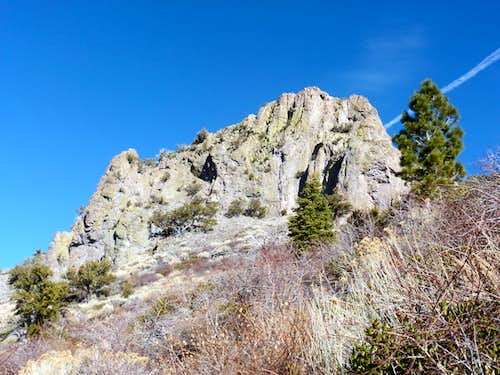 Looking up at the south face of Cone Peak 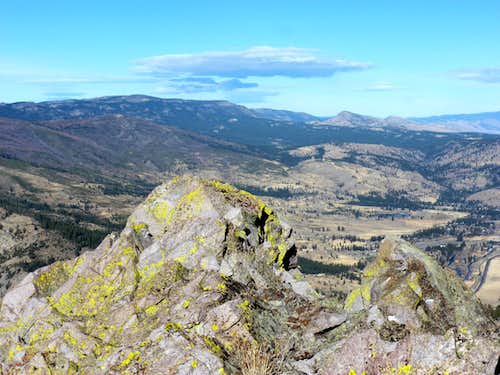 Total elevation gain from the parking area is about 2600’, with 500’ coming in the last 1/3rd of a mile or so from the road to the peak. Total round trip distance is approximately 8 1/4 miles.

Stay on the road. There are a few areas of private land with “No Trespassing" signs, but the main road up towards Cone Peak is in the Toiyabe National Forest