If you are driving, you have the following access points to choose from: - village of Grzmiąca (east of Rogowiec) - valley of Rybna (north) - Andrzejówka Hut (west) A convenient and pretty comfortable alternative is travelling by train and getting off/on at Głuszyca or Jedlina Zdrój. The trail from Głuszyca runs through Grzmiąca, where a quaint wooden church from the 16th century stands by the main road. The trail from Jedlina ascends a pass called Przełęcz pod Sajdakiem or Przełęcz pod Wawrzyniakiem (Sajdak and Wawrzyniak are the summits on the Jałowiec Ridge (part of the Wałbrzych Mountains) between which the pass sits). The trail crosses the pass at about 570m and drops into the valley of Rybna. The trail from Andrzejówka Hut is the least interesting and the least demanding, the main attraction being the hut itself.

Most hikers and weekend strollers – Borowa's summit is located on the administrative boundary of Wałbrzych – seem to climb Borowa in the evening in order to watch the sun setting behind the Giant Mountains (Karkonosze), crowned with the pyramid of Śnieżka that dominates the western horizon. But there is much more to see here: in the south the Suche Mountains unfold end to end; in the southeast is the massive, flat ridge of the Sowie Mountains with the landmark of an old, whitish viewing tower on Wielka Sowa; in the northeast Ślęża at 719m seems to be much higher than it really is; and in the northwest Chełmiec, the usurper, rises almost to the same height as Borowa.

Getting There, Maps & Routes

Wałbrzych lies about 80 km southwest of Wrocław, the capital of Lower Silesia. (The rail and road links between the cities are good.) A hike to the summit from the train station called Wałbrzych Central, which is in fact on the outskirts of the city, takes approximately 1.5hrs. You can opt for either the red, gentle but rather mundane, or yellow marks. The latter climb Zamkowa Góra, i.e. Castle Mountain, which features old castle ruins, then take you to Kozia Przełęcz and the Route of Pain (please see Overview). To get to Kozia Przełęcz without climbing Zamkowa Góra, you have to follow some unmarked paths or forest roads.

By road, via Rusinowa and Kamieńsk, you can get close to Kozia Pass (just a few hundred metres away), which translates to about 40 minutes’ walk-up to the summit. It will take about the same amount of time if you approach from the west, having left your car in the hamlet of Kamionka, just north of Rybnica Leśna. There are also several options making your hike longer – just have a look at the map.

No red tape except that camping is not allowed. 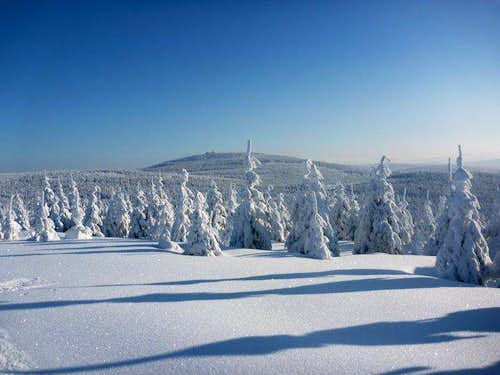