Refer to the main page for details on getting to Vancouver Island and to the general vicinity of the mountain ie the town of Gold River.

Immediately past the bridge 23 km from Gold River turn right onto logging spur H60. Engage 4WD here. Drive approximately 1 km up this road to a fork labeled H60D. The right hand fork is the way that Conuma was approached for many years since Watts and Gibson first used it in 1989. Regretfully H60D is thoroughly decommissioned. The bridge has been removed only a few metres east of the fork described above. Elevation at this point is ~ 250 metres.

Continue on the left fork for another 1-2 km until the road, which is now very rough and narrow, arrives at a second fork. The left hand road is the one to follow but, like H60D, it is barred to vehicular traffic – although an ATV could certainly negotiate it. This time a huge walled ditch blocks the way. Instead turn right and find a wide and flat parking spot 100 metres away. This is an excellent spot to car camp if contemplating an early start next day. Elevation here is approximately 450 metres. Walk up the left fork right to its end in 30 minutes to the start of the route at the usual pile of logging slash at N49° 48.176 W126° 18.809. Starting elevation here is 650 metres.

Head southwest off the end of the old logging road and climb the slash for about 200 vertical metres to gain the old growth. You are aiming to make an end run to the south of the big, forest choked gully that splits the east face at this point. To this end, once in the old growth, continue southwest until it’s possible to make a turn north around the top of the gully. It should be emphasized that you will do this without much in the way of visual acuity; you are by now in dense west coast huckleberry bush and navigating by touch, sense of smell, intuition and, if you’re sensible, GPS.

Once around the gully, make a descending traverse to a flat area with some seasonal tarns. Here there is some temporary relief from the bush and even some animal trails to follow.

Continue north off the flat area, up another very bushy 200 vertical metres and finally onto the flat, open part of the south ridge with the summit tower now in full view. Views of Nootka Sound to the west now open up.

The summit tower looks very imposing from the upper south ridge and does, in fact, require patience and careful thought to overcome.
Continue north from the upper south ridge via a brief descent and onto the summit block proper. It is very difficult to describe an exact route up since there is no marking whatsoever and opinions vary. In general, follow weaknesses wherever you find them in the form of bushy ledges, gullies and snowfields. Whenever you encounter difficulties, traverse left (west) and continue to search for further weaknesses that way. Be prepared to rope up if necessary and certainly prepare to rappel on the way down.

If you follow a generally westward line, you will eventually arrive at a big gully to your west (above the arch in fact) with the summit in view above and immediately underneath a characteristic shark-fin shaped rock on the ridgeline. Proceed up a flower filled groove and make a final easy scramble to the summit.

There is a summit register to sign and 360° views to admire; from Victoria Peak in the north, to the big peaks of Strathcona Park to the southeast to Nootka Sound and the open Pacific in the west – and much, much more. 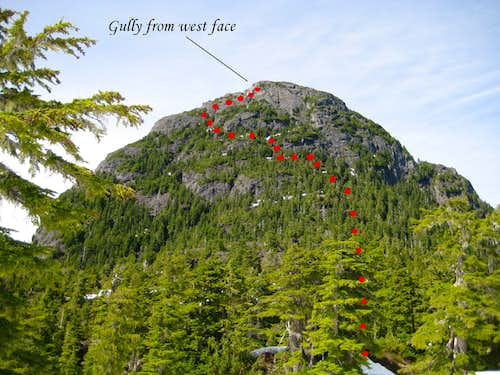 Summit route
Descend by reversing the above.

A MapSource GPS tracklog is available to any reader wanting to do this route. Simply email or send me a PM.

A word on SP ethics 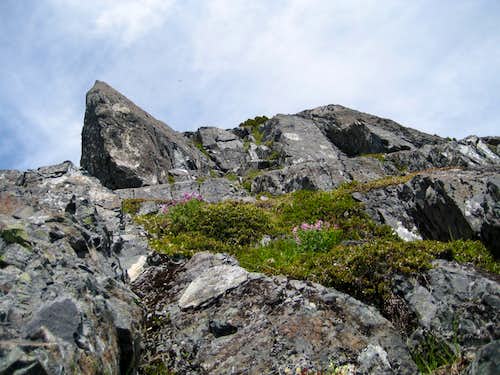 Final pitch and summit
I would not like the reader to be unaware of the fact that I have not quite reached the summit of Conuma Peak. This is dealt with in the attached TR. Suffice to say that we invoked our turn-round time – when already 30 minutes over it – when I failed on my initial attempt to make the last two moves past the “shark-fin” rock. There was simply not enough time to try another line. I could see the summit just 30 vertical and 75 lateral metres away but felt it too dangerous to proceed on the line I had chosen.

SP ethics decree – and I completely concur – that a page author should have summited what he or she is writing about. In considering this, I thought it a shame that readers should be denied a description of a unique, beautiful and historical mountain for the sake of 2 moves and 30 vertical metres. I don’t think too many more SP members will be rushing to climb the last bit just to claim authorship rights. 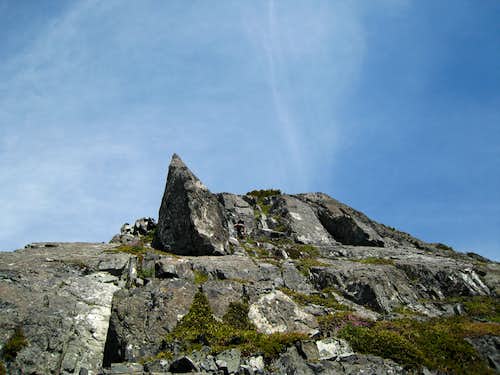 At least one rappel will be necessary on the descent. Carry a 50 or 60 metre rope and slings etc to enable this.

Some parties report having to use the rope in one or two places climbing the summit block. Others manage without. Certainly a small rack should be carried - mostly large pieces and slings.

Ice axe and crampons need only be taken in winter or very early season.