the start!
Cooler Than Jesus, fittingly, is more of a “religious experience” than a climb. It was on my radar for several years but is remote and takes a certain kind of partner to appreciate. With a route name like this on a feature also aptly named “Top of the World Overlook”, I knew it had to be interesting. Cooler Than Jesus is one of those stimulating routes you run into that offers a unique commitment in that you must rap in to climb it. Meaning if you can’t climb out for any reason, your day is going to suck. There is no water anywhere to be found and the hike out to Fisher Towers looks dry and tough and will cost you days of negotiating to get back to your vehicle. 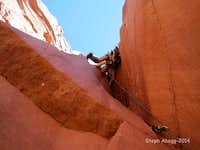 1st Pitch
Steve Bartlett and “Strappo” Hughes established Cooler Than Jesus in 1991. Bartlett labeled it “one of the best 5.10 routes in southeastern Utah”. If only every FAer could be so modest. While it is far from being that good, it is a worthy objective near Moab in a fantastic remote setting. The crux of the route is getting there for sure. With 4x4, high clearance, split axles, the whole works at my disposal, I got bored of the crawl and decided to quit driving just under a mile short. You can hike the last several miles of the road much quicker than you can drive them. I would guess that it is a relatively popular objective for the ATV crowd. In fact we climbed it on a Friday and had a party of trundlers show up on ATV’s to drop rocks down on us about mid-point of the climb. Someone, someday, will have to explain the sexual pleasure derived from tossing a rock off a cliff. I just don’t get it.

While the first pitch is the technical crux of the climb (5.10), the third pitch (5.8-5.9 chimney) will be as challenging for those lacking experience in run-out wideness. One of the many weird factors regarding this route is that you have to set the belay for the first pitch while still on the rap line. There is no longer a ledge at the base of the large flaring chimney if there ever was one. You rap, hang, build the gear station and start climbing. Most of the climbing through the first two pitches follows nice splitters. The crux offers two choices, C4#4 off-width straight up and above the flaring chimney or a finger crack out and left. Either way, you end up at another semi-hanging belay at the base of another splitter. The second pitch has a few loose blocks on it towards the end but is considerably easier than the first. The chimney pitch (last pitch) is an aesthetic feature. The first 2/3rds are well protected. The last 3rd does offer some pro if you are willing to travel up the harder squeeze climbing (5.9) deeper in.

the drive
Top of the World Overlook is a several hour drive from Moab including the slow going during the last couple of miles. Drive way past the Fisher Towers (northeast) on Hwy 128 to the Dewey Bridge campground area. Turn right on a decent but winding gravel road (trail head and restroom). Drive approximately 5 miles to a signed junction. Take the right fork signed (2014) for Top of the World Overlook. This road will challenge most stock 4x4’s. Clearance is the main issue. This appears to be a popular road for local ATV enthusiasts and for good reason, the Top of the World Overlook offers awesome vistas and the road getting there is what they are looking for in regards to challenging their ATV’s. For a regular truck or car forget it. Unless you have the ability to split axles to gain clearance, you won’t make it pass several of the steep inclines not to mention you can hike the road much faster anyway. First couple of miles no worries for a regular truck though. It is just the last several that are harsh. With a Toyota FJ Cruiser I lost interest during the last mile and just parked and hiked. There are plenty of wide spots to pull off and park along this road. The rap for the climb starts at the very top of the overlook. Turn left and find an obvious chimney opening. Rap off of the lone tree (photo provided) on the far side of the opening down the middle of the west face of the huge corner making up the chimney. Two double rope raps get you to the base of the clean flared chimney in the middle of the west face.

Steph Abegg, my partner and photographer for this climb, did an outstanding job on writing up a detailed trip report on her blog site.

1st Pitch- 80’- 5.10-/ This is the crux pitch in terms of technical difficulty although there would be some who might have as much of a challenge with the chimney pitch. As before mentioned, this first pitch has an awkward start if for no other reason than having to set up a hanging belay on rappel, surrounded by chossy rock. The old Falcon guide talks about there being a ledge, but if there ever was, it is gone now. We rapped down to the ledge in the corner and thus I had to traverse out on very loose rock to set up the hanging belay. I do not recommend this option. Rather be prepared to set up a hanging belay on small gear in the base of the bomb bay chimney whilst on rap. Start up the large flared corner via fingers that quickly turn to hands and easy stemming. After the stem box, I stayed with the wide crack above (C4#4) and it was difficult for the grade. There is a finger crack out left that is easier. I recommend exiting the wide stuff as soon as you can reach this left option. Follow either crack you chose to a small lip of a ledge below a splitter in the middle of the face. A C4#2 and #3 are good for the gear belay here or if you brought enough gear and slings, you could easily combine these first two pitches.

2nd Pitch- 80’- 5.9/ Fun pitch and by far the easiest of the three. Follow the splitter via mostly hands until you reach the blocky portion. Ease your way through the blocks (one or two could be dangerous) to the fixed station below the chimney.

3rd Pitch- 160’- 5.8/ The final chimney pitch is not as bad as some make it out on mountain project. The first two thirds are well protected via a chock stone and a decent finger crack in the left wall. I chose to climb deeper (5.9) for the final run out portion and found one bomber C4#.75 pocket. Going in deeper does mean more squeeze chimney technique vs conventional chimney climbing (both knees forward, more arm work). Towards the top (I “birthed” just about in the middle of the chimney) you start to find more features in which to assist, but they are a bit chossy, trust them with caution. Set up a belay on a tree on top. The rope drag even with solid double rope technique was a bitch on this pitch because the first several meters run the ropes across a ramp. Extend your pro for minimum drag. It is a potentially sandbagged 5.8 lead and for some, based on their chimney experience, could even be the crux pitch of the route.

Of course the descent is at the beginning which makes it part of the “cool” factor of this route= commitment. Bring plenty of cord to extend a temporarily rap off the rap tree (photo) on top of the chimney so you can reach the lip of the west face. Rap with double 50m or 60m ropes straight down from the tree to a ledge with a fixed rap in the middle of the face. Take another double rope rap down to the base of the flaring chimney which is obvious. What is not obvious is what happened to the referenced “ledge” below the chimney. Be prepared with small cams to set a belay while still on the rap line (use a prussic or wrap your leg) as there is no ledge to stand on directly below this chimney portion. If you go all the way to the ground, you will be forced to climb a short rotten pitch to access this same spot. If you swing over to the ledge by the main corner to the left, you will be forced to traverse in on rotten rock.

Double rack from C4#.4 to #4. The 4’s will help tackle the wide crux on the first pitch. The 3’s will be helpful on one of the gear belays, #.5 and #.75 on the other. You will find some small gear on the chimney pitch as well including a micro cam somewhere as I recall if you wanted it. I placed no wires. Bring plenty of slings to extend your placements in the chimney to avoid rope drag. This is a chossy route with several loose block consequences, thus wear your helmets on this one. They will not get in the way in the chimney. This route stays shady in September till noon, for the most part it is direct west facing. 4x4 for the drive or be prepared to hoof it for most of the road once you take the right fork (several fast hiking miles). Extra cord for the temporary first rap.