Copa is a 6188 m (20,302 ft) high mountain with a moderately difficult (PD/AD) ascent, and its western slopes offer a good spot for skiing at high elevations. However, don't underestimate the crevasse risk, especially with continued global warming. 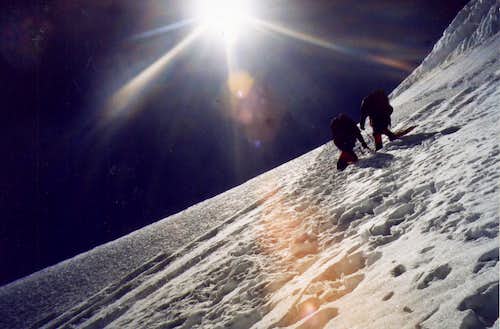 Slope on the upper section of Copa 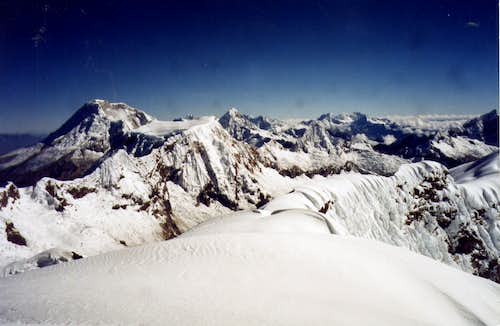 View from the summit of Copa
Take a collectivo from Huaraz (which can be found at the bridge on the north side of town) to the town of Marcará. From here take a taxi to either Chancos or to Vicos. (Its been said there is a fairly new road to the left 1 km beyond Chancos, which at the end has a trail to Lake Lejiacocha. This trail is preferred since he other alternative is to take a trail just beyond Vicos which will wonder through the farmland before meeting up with the previous trail. I suggest the first alternative since even with a map, the second option was very confusing. From Vicos you will gain about 5000ft of altitude and hike approximately 10miles, reaching a hut at Lake Lejiacocha which makes for a plush campsite at 4300m (the summit can be reached from here in a long day, otherwise a camp can be placed on the glacier plateau).

Crevasses on the upper section of Copa 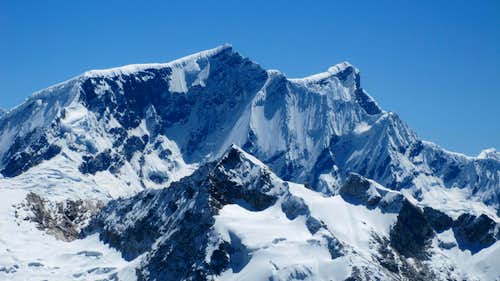 Mount Copa as seen from the east
From basecamp at Lejiacocha, cross the dam taking a trail to the couloir that is obvious from the dam roping up at the base of the couloir where the glacier starts.

From here find the path of least resistance through the couloir. In the late '90's this was towards the left side. Gaining the plateau at 5100m skirt the worst of the crevasses gaining good campsites if you would like to camp here before proceeding to the summit. Depending on how the crevasses are, from here a large crevasse can be skirted on the right (late 90's beta nd it will change). From here follow the right side of the broad gentle slope, until it becomes very steep. Continue up left up the steep slope, skirt around a few crevasses, and the ridge will narrow forcing you to turn left as you gain a short, moderate slope leading to the final summit ridge.

Mount Copa, as most of the peaks in Cordillera Blanca, is located within Huascarán National Park. The entrance fee for more than 1 day is 65 soles (19.50 USD approx.), and it is valid for a month.