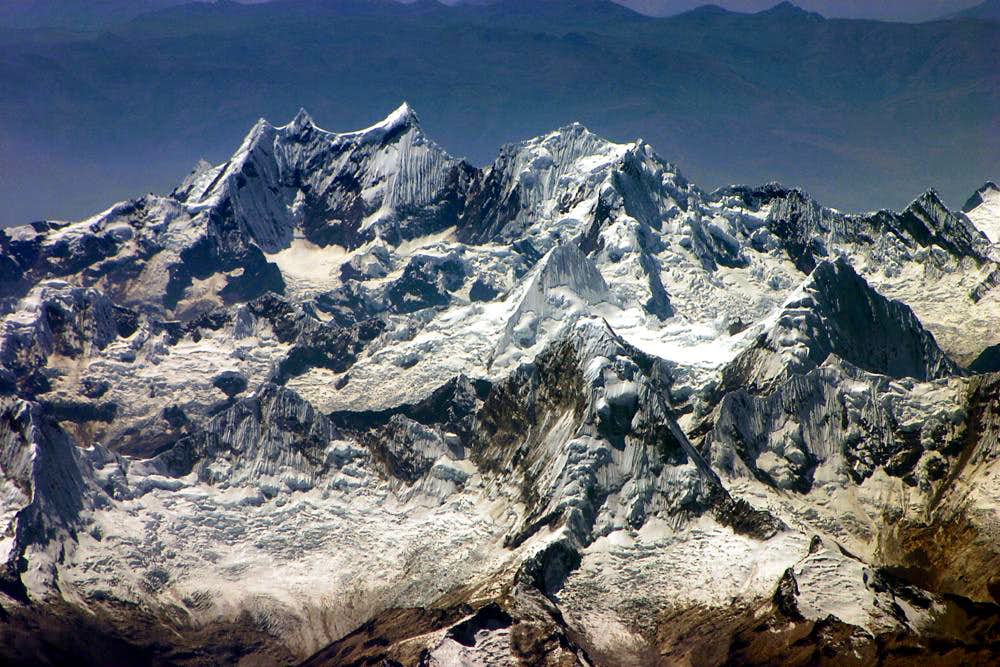 Arial view of the northern end of the Cordillera Blanca, taken on a flight between Lima and Guayaquil, Ecuador. Help identifying any of the peaks would be greatly appreciated! Photo by Howie Silleck, July 13, 2006.
« PREV NEXT »

What an amazing shot! This would make a great print.

Thank you for the kind words Jack - they mean a lot to me, coming from one of SP's best photographers!
Cheers,
Howie

Really moving shot. My heart is pounding just looking at it.

Very difficult but I got it!

I think the three peaks of left side are the "Pucajircas Norte" (according with a book of Cordillera Blanca are very similar and I had pictures of Pucajircas of my trip of Perú as well; I'm sure of it) and then you had all the peaks (I had a very similar image in the book):
The three Pucajirca Norte (III: 5919m, II: 6030m, I: 6046m), the Pucajirca Oeste (II: 5900m, I: 5900m), the Pucrapucraraju (5790m), the black pyramid of Rinrijirca (5810m) and finally the white pyramid of Taulliraju (5840m). All in the massif of Santa Cruz. Ufffff.. of all this peaks only one had page in SP, my page of Taulliraju, but all the images are of the other face. As well you can attach the image to Cordillera Blanca RAGE.
Great and impressive image Howie

Re: Very difficult but I got it!

Thank you so much for the info! I'll add the picture to the range page.
Cheers,
Howie

You took a real nice picture from the northern part of cord. Blanca.
I dont`t think there is Taulliraju on this picture, that one would be more to the right. In the middleground you can see in the middle of the picture the southface of Alpamayo, than to the right the big piramide of Quitaraju (and not Taulliraju).
Just in the front of Alpamayo you can see Santa Cruz grande; this peak gives his name to the whole range. To its right is Nev. Abasraju. To its left first you can see Santa Cruz chico and then Santa Cruz norte.

From this direction I`ve never seen the range, thanks for posting!

We make this flight in autumn, too! Really looking forward to it.
On which side in the plane did you sit - left or right side?
Cheers Thomas

Thanks Thomas - aim for a window seat on the right side of the plane!
Cheers,
Howie

Thanks for your info - booked a window seat on the right side now! Hope that I can make a similar beatiful pic like you!
Cheers, Thomas